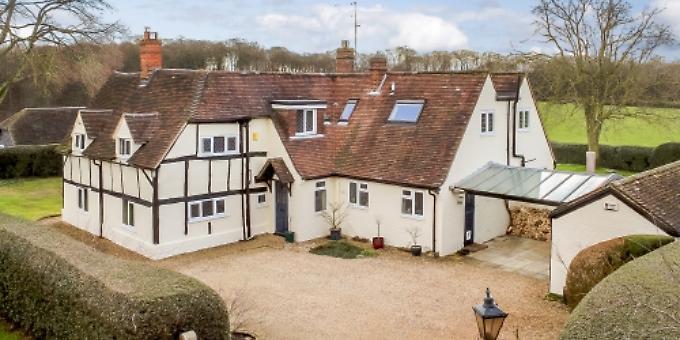 NUT Tree Cottage, a four-bedroom country house on a large plot in the village of Bix, just outside Henley, has come on the market with Ballards at a guide price of £1,795,000.

The oldest bits of the house are said to have been built in the 1600s, although the whole area around this property is peppered with stories of historical events dating even further back than that.

Just up the road, for example, on the site of an ancient settlement known as Bix Brand, are the ruins of the Norman Church of Saint James, a medieval flint and stone building so spooky and atmospheric that it has been used as a film set in several movies and TV shows.

We know the ruins of the church are more than 900 years old because it is listed in the Domesday Book of 1086 — the survey commissioned by William the Conqueror after he and the Normans invaded England, bumped off his rival Harold II and declared himself king.

The Domesday Book is a comprehensive inventory of everyone and everything of any value in William’s new kingdom — how the land was divided up, who lived where, how many pigs they owned, etc — so that he could charge taxes to pay for his armies.

When it was published, the book showed that there were 10 families living around the now-ruined Church of Saint James at Bix Brand in 1086. The villagers would not have been living very comfortably, however. Each family, and even some of their animals too in the winter months, would probably have been squashed into a humble one-room timber cottage with only basic food to eat, dirt on the floor and an open fire for warmth.

Wind the clock forward about 600 years, and building work began on the nearby Nut Tree Cottage. The house has of course changed a lot since the 17th century, and it is now a characterful and well-presented 21st century home.

There are four reception rooms off the entrance hallway, the biggest of which is a handsome 30-foot drawing room with a large bay window overlooking the garden.

The family room and study both have traditional fireplaces and timber beams, and there is also a dining room and a cloakroom on the ground floor.

The kitchen is fitted with oak kitchen units, a shiny blue electric aga, an additional oven and hob, granite work surfaces and an island in the middle.

To one side of the kitchen is a beautifully bright breakfast room, with space for a large dining table and chairs, and glass bifold doors that open out on to one of the two patios.

There is a separate utility room off the kitchen, which leads to a covered courtyard with a row of three outside storage rooms.

Upstairs on the first floor, there is a split-level landing leading to four bedrooms, two of which have en suite bathrooms, and another bathroom too.

The master bedroom suite has windows on three sides and a balcony overlooking the garden. Its swanky en suite bathroom has two windows that let in lots of natural daylight, a stylish black and white floor and a free-standing bath.

Set in private grounds of about an acre, the property has two gravel driveways leading up to the house, and a triple garage.

There are two gardens surrounded by dense mature hedging, and beyond the gardens there is an all-weather tennis court.

A spokesman for Ballards estate agency said: “Nut Tree Cottage is a stunning country house offering spacious and flexible accommodation, presented in superb order and located in an Area of Outstanding Natural Beauty.

“One of the highlights is its amazing views over the open countryside. The house is perfect for modern day living, but it also retains much of its original character — including a wealth of exposed timbers, lead light windows and feature fireplaces.”

Nut Tree Cottage is just off the Fair Mile at Bix, north west of Henley, just past Bix Manor and close to Lower Assendon.

Mispronounced place names are on the map

A LIST of the most frequently mispronounced place names in the UK has been compiled. Tim Alcock of ... [more]

THE Coach House is a special place, not least because it is situated within the grounds of ... [more]

NUT Tree Cottage, a four-bedroom country house on a large plot in the village of Bix, just outside ... [more]