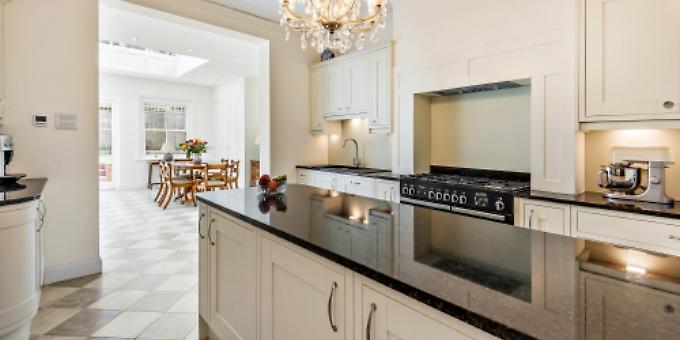 ALBERT HOUSE is a unique period property at the bottom of Greys Road, on the market with Davis Tate for £1,250,000.

The owners bought the house in 2015 from 80-year-old Ted Dorey, who had lived there since he was three months old.

After a period of settling in and thinking about what to do with the place, they embarked on an ambitious renovation project, bringing the house completely up to date whilst carefully preserving many of its original features and all of its character.

Albert House was built in the 1890s by William Hamilton, who built many of Henley’s old Victorian houses and who named this place and the nearby Albert Road after his son.

The owners say: “He was an interesting character, his was a sort of rags-to-riches story.

“His father was a bricklayer and he was born in the Row Barge pub. At the end of his story he was the mayor of Henley — he became a real local bigwig — and his picture hangs in the committee room of Henley town hall.”

During the war, refugee Jewish families from London took shelter in Albert House, and in the Fifties and Sixties, Ted Dorey’s parents ran it as bed and breakfast accommodation. The owners said: “Some of the guests were people who were appearing at the Kenton Theatre, people like Robert Morley, they stayed here and then appeared at the theatre.

“When we moved into the house, there was a little sliding hatch where you signed the guest book and paid to stay the night there. We’ve taken that out, it’s now a doorway — but it was a reminder of the bed and breakfast days.”

Once all the designing and planning had been done, local builders Charlie Porter and Ashley Gow came in and did the work, along with Paul Farmer at Lime Works who restored much of the original brickwork.

The house was completely rebuilt and redecorated on the inside, and a large extension was put on the back, across the entire width of the house.

The owners added: “You’re buying almost a brand-new house with a lot of tradition. It’s a brand-new roof, all the electrics were redone, all the plumbing was redone, new bathrooms, new kitchen, and it was completely redecorated.”

They completed the renovations of Albert House to a very high standard, paying attention to even the smallest of details. They put plaster coving in all the rooms where there wasn’t coving before, blending it in, so you can’t tell which is old coving and which is new. They even replaced the decorative railings on the roof, which had originally been installed by William Hamilton and later removed.

The front porch leads into a wide hallway, from where you can access all the downstairs rooms. At the front of the house are two reception rooms — a sitting room and a dining room with a wide bay window.

The shaker-style kitchen is stunning, with cream coloured units and plenty of granite work surfaces, built-in appliances and a drinks station.

Beyond the kitchen is the impressive extension that the owners added. A wide, bright, open living space that could be used in any number of ways — as a dining area or a living room or both — it has a glass lantern in the tall ceiling and doors leading out to the patio.

On one side of the extension there is a new utility room and a downstairs bathroom, which can be accessed from the garden through the back door. The owners say: “We half designed it with our big dog in mind, because it’s got an enormous walk in shower — you can hose down muddy dogs or muddy teenagers who’ve been playing rugby.”

Upstairs on the first floor there are three good-sized bedrooms and a rather grand family bathroom with Victorian red brick tiles, a chandelier and shutters on the window.

On the second floor, there are two further bedrooms, one of which is currently being used as a home office, and a great view over the rooftops of Henley and the countryside beyond.

There are two studies upstairs, one on each floor, but there is plumbing available for the one at the top of the house, in case the future homeowner wants to make it into an en suite bathroom.

Albert House has some beautiful Victorian fireplaces, made from classic cast iron and decorative tilework, four of which were sourced elsewhere.

Underfloor heating has been installed in the utility room, the tiled hallway, the family bathroom upstairs and the extension at the back. The cellar has been extended across the entire width of the house and contains two storage rooms.

Outside, the south-facing private back garden has a patio area and steps up to the lawn, and there are two resident’s parking permits with the property.