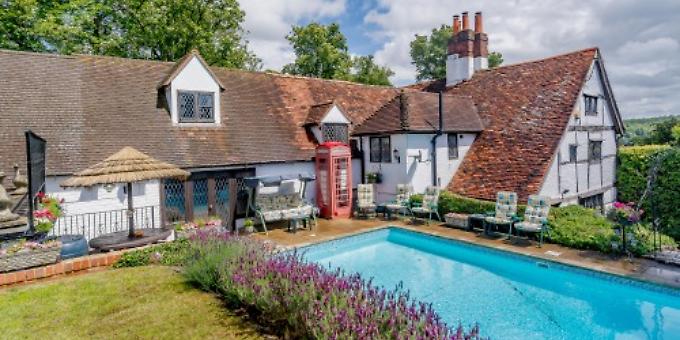 IN these strange times, it feels slightly soothing to be gazing into a house that has stood firm through four long centuries of war, disease and social change.

One of Henley’s oldest properties, Ancastle Cottage is a survivor — it gives us a link to the past and maybe even a glimmer of hope for the future.

An attractive and substantial house with five bedrooms and a swimming pool, it has preserved many of its original features such as pretty lattice windows and oak beams in the ceiling.

The front door opens into an entrance hallway with a downstairs cloakroom, a galleried upstairs landing and a vaulted ceiling. It leads into two of the three reception rooms and the kitchen.

The kitchen was refurbished in 2013 and has a central island, wooden work surfaces, Shaker-style hand-painted kitchen units and a breakfast area.

The living room has heaps of character and is a cosy place to relax in — it has an inglenook fireplace with an old bread oven that is still visible and lit with soft lighting, making it into an interesting feature.

The dining room has an exposed brick fireplace next to a door to the study, which is where the original doorway to the cottage was over 400 years ago.

On the other side of the kitchen is a third reception room, which has double doors that open out on to the garden.

Upstairs on the first floor there are three bedrooms and a family bathroom. The lovely master bedroom has an en suite bathroom, and there are two further bedrooms and eaves storage space above on the second floor.

The walled garden is beautifully laid out over three levels — it is not overlooked and has a heated swimming pool, a paved terrace and mature trees and shrubs.

By the pool there is a traditional red phone box that has been made into an outside shower — a quirky feature that adds character and colour to the garden.

There is also a double garage and an off-road parking space available.

Ancastle Cottage is believed to have been built in 1580 as the original town dairy — the current vendors have spent the last 40 years restoring and improving it and it is now a beautiful family home. The property is situated on the junction of Paradise Road and Gravel Hill, and within easy walking distance of Henley town centre.