Hundreds of items to go under the hammer 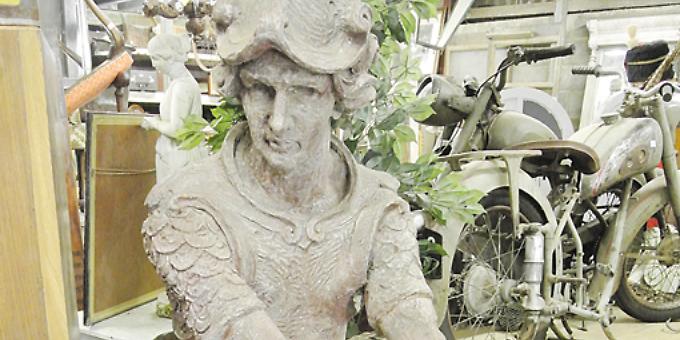 NINE hundred items belonging to the owners of a farm estate are to go under the hammer tomorrow (Saturday).

The large collection of antique and architectural pieces belong to the owners of Worleys Farm near Crazies Hill.

The interior and exterior pieces were collected over a number of years and include the contents of two chateaux in Normandy.

The lot with the highest estimate is a 19th century terracotta statue of a Venetian centurion, which is expected to fetch between £2,000 and £4,000.

Three lots have estimates of £1,500 to £2,500  an 18th century, French carved oak cupboard, an Italian dining table and French oak shelves, which both date from the 19th century.

A Fifties Peugeot motorcycle is expected to fetch up to £1,500 and a 1955 New Hudson motorbike and rare French motorbike frame are expected to make up to £500.

Other lots include a pair of 19th century flintlock pistols with semi-precious stones and silver, several rifles and swords and five lifsize mannequins of soldiers in full military uniform.

Panels and doors from Old Worleys House on the estate will be sold along with stone columns that were discovered in the grounds as well as garden statues, planters and large window panels which were formerly part of an orangery.

A range of toys, collectables, lighting, mirrors, travelling trunks, bookcases and desks will also be offered together with dining tables, drawers, dining chairs, soft furnishings and Swedish furniture dating from the 18th and 19th centuries including sofas, tables and beds.

Terry Wright, head of architectural auctions at auctioneers Wellers, said there had been interest in the sale from around the world.

He said: We have received numerous calls and emails. We have received great interest from Canada, Australia, France and Sweden. We are expecting it to be a very well-attended sale.

Gary Wallis, an antiques expert based in Remenham Church Lane, who instructed Wellers, said: You really could furnish your whole house from this one sale and all the items are unreserved.

The auction will be held at Worleys Farm in Worleys Lane from 10am with viewings available from 8am. A full catalogue can be found at www.wellersauctions.com