Converted stables where each day feels like a perfect holiday 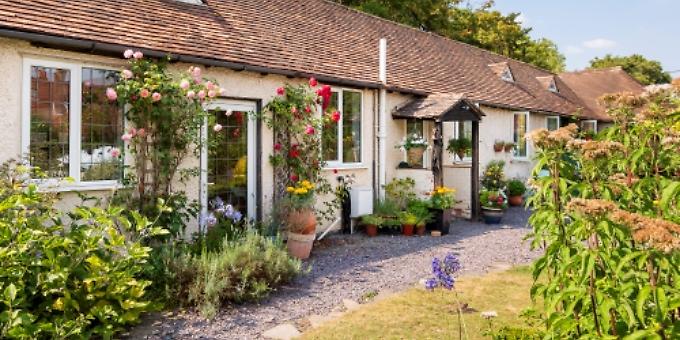 A FORMER stables and coach house has come on the market.

Situated in a secluded position on the edge of the village, the single-storey home has mature gardens and a heated swimming pool.

Owners Carolyn and Paul Bellchambers have owned Sowberry Cottage for 20 years, having moved from Cholsey because they wanted a bigger house with good transport links.

A covered entrance porch and glazed front door opens to an entrance hall. A door to the right leads to a dining room, which has a vaulted ceiling with exposed timber beams.

To the left of the hall is a country-style kitchen, which has an extensive range of cream coloured shaker style wall and base units, with contrasting black work surfaces and an inset Belfast sink. There is plumbing for a washing machine and a dishwasher.

The kitchen has a ceramic tiled floor and a panelled ceiling with recessed spotlights. There is also a separate utility room.

Leading from the kitchen, there is a 27ft sitting room, which is triple aspect and includes a box bay window and a glazed door to the garden. It also features engineered oak flooring, high ceilings and an attractive brick fireplace with a wood-burner and timber mantle.

Mrs Bellchambers says the long shape of the living room, with the kitchen behind it, offers clues to its former use. She explained: “The living room was the old coach house so it has high ceilings. Where we have the window seat now was where the doors used to be to let the coach in.

“We have kept it as one large room and it is very light as there are four windows across three sides. It’s very relaxing and is also what I would call snuggly as we also put in a log burner, which is just fabulous.

“Where the kitchen is set at the back, we think this used to be the office space when it was a stables and where the workers used to have their tea.

“You can see where a wall had been knocked through to create a larger, open space.”

Along the inner hallway there are four double bedrooms. The family bathroom has a blue, double-ended free-standing clawfoot bath, a basin and toilet with a high-level cistern.

There is also a modern fitted shower room with a white suite comprising a shower cubicle, basin and a toilet.

From the third bedroom there is access to a loft, which can be used as a hobbies room.

Mrs Bellchambers says she had never lived just on one level before but they got used to it quickly and said there are benefits to doing so.

She said: “All the bedrooms are on the right-hand side of the cottage. They are what used to be the stables for the house next door. In the morning when you wake up you have the sun shining in, which is a lovely way to start the day and you can see out on to the garden.

“I had never lived on one level before so when I moved here it was new to me but with all the bedrooms at the far end, it does feel that they are separated. If someone is in the lounge and has the TV on, you can’t hear it because the walls are so thick.

“It also gives us set areas for the day and the evening. The views from the bedrooms are of the garden but you can sometimes see the hills towards Henley.”

Outside, the landscaped and well-stocked gardens wrap around the property with a chipped slate path. To the north side there is an area of lawn and raised beds. To the east side there is extensive planting with mature trees and shrub beds and some roses.

Mr and Mrs Bellchambers installed the swimming pool nine years ago, which took three months to complete. It has steps down to the shallow end, a patio terrace surround and a retaining wall with low-level lighting.

Mrs Bellchambers said: “I have totally enhanced the garden and we put in the swimming pool, which was a grass bank before. We thought it was such a nice thing to have.

“When you arrive at Sowberry, having come up the road and through the gates and close them behind you, you feel totally relaxed because you are not at all overlooked.

“It feels quite magical and everyone that comes to see us and stay say that they feel that they are away on holiday.”

The property has a detached double garage, which is currently being used as a commercial kitchen and storage room.

It is used by Mr Bellchambers, who runs catering business The Late Chef.

Mrs Bellchambers, who has worked as a personal assistant, said the outbuilding could easily be converted back into a garage of for separate accommodation.

She said: “Nine years ago my husband, who worked in technical marketing, decided on a change of career and he started his own catering business.

“That building was a double garage, which he converted into a professional kitchen with storage but we have kept the double doors on it so it could go back to being a garage or, as someone suggested to me, a “granny” annexe.”

The couple, who are planning to semi-retire and live on the Isle of Wight, say they have loved living in Moulsford.

Mrs Bellchambers added: “Moulsford as an idyllic village on the river. It is in a perfect location – it’s totally relaxing. We also have lovely neighbours – one refers to our small group of houses as the Sowberry Enclave.”

RESIDENTIAL property transactions have increased by 40 per cent for a Henley legal firm. Blandy & ... [more]

THE commercial team at Simmons & Sons estate agents has expanded. John Jackson, who lives in ... [more]

A WOMAN who finished renovating her home two months ago is selling up to move closer to her parents.... [more]