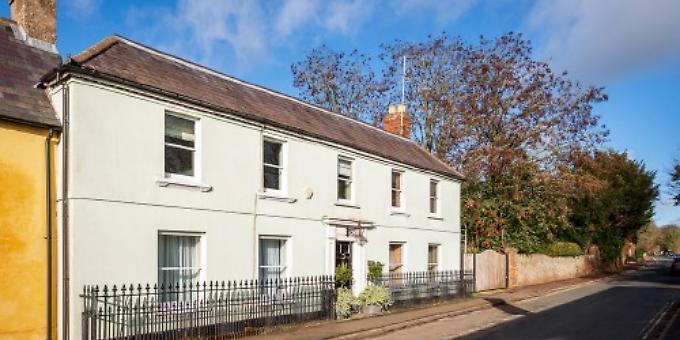 A COUPLE who completed a total renovation of an 18th century period property in Watlington are now looking to downsize.

Carolyn and Neil Boddington moved into Westfield House in 1996 as they wanted more space for their family to grow.

Now their sons, Dan and Kieran, have flown the nest, they have put the four-bedroom Georgian home in Shirburn Street on the market.

Mrs Boddington said: “Structurally and in terms of its footprint, it is exactly the same as the day we bought it but we have totally updated it.

“When we moved in we had a young family, a four-year-old and an 18-month-old, and my husband had just started his own business.

“We were living in a two-bedroom house in Watlington before and when this came on the market we thought it was perfect for our family to grow into.”

When the Boddingtons bought the property they knew that it needed a lot of work but they made sure to take their time.

“It was really quite dated,” Mrs Boddington recalled. “The main bathroom was avocado green and the shower leaked while the carpet and wallpaper had an old-fashioned swirly pattern.

“We had bought it from a young lady who had bought it as a renovation project but her circumstances changed which meant she hadn’t got far by the time we took it on.

“The house was in some desperate need of love.”

The couple started to put their own stamp on their home in 2000 when they updated the bathrooms and redecorated.

Then a few years later they made the biggest change and knocked through a few walls to convert three small rooms into one playroom. It has a vaulted ceiling, bookshelves, skylights, stone floor and glazed double doors to the garden.

There is also access to the utility room with storage and laundry area, lined with shelves.

Mrs Boddington said: “When we first moved in, the back of the house was disconnected as there was a sort of flat.

“With our sons and their friends getting so big and beginning to move around, it suited us to have a play room.

“The house very much has its own character and we had to live in it a little while so we could understand it and make sure any changes that we were looking to make were sensitive.”

Other changes included replacing a window to create a portico entrance, installing electric gates to provide off-road parking and levelling the bedroom floors.

Mr Boddington joked: “You would be in bed and if you weren’t careful you could have rolled out.

“Other than that there was nothing really structurally that needed to be done. The roof and the walls were all okay.

“The latest thing that we did was to replace the master en-suite about a year ago.”

Many of the original period features have been retained, such as marble fireplaces.

Mrs Boddington said: “There is a house on the river in Henley that has the same tiles around the fireplace so I know that the ones we have are Victorian.

“There is also lots of coving downstairs and archways.”

Mr Boddington said: “Each of the junctions has a feature on it. The staircase is also a feature in itself as it becomes narrower as you make your way up it and on to the landing.”

The master bedroom, which has a 15ft tall ceiling, was used differently in years gone by.

Mrs Boddington explained: “In the olden days, from what we have been told, the reason we have a fireplace and a chandelier is because there would have been an old back staircase leading from what is now the master bedroom into the kitchen.

“It used to be a Georgian morning room with the large window and fireplace, with its shutters and that now leads on to the dressing room and en-suite.”

The couple found out that the iron railings at the front of the property were old because a driver once crashed into them and they needed to hire a specialist to repair them.

The Boddingtons, who both work from home, say they couldn’t have wished for a better space to raise a family.

Mr Boddington, a planning consultant, said: “Because we have stone floors, the boys when they were growing up used to ride their tricycles or skate.

“In the dining room, we used to move the table to one side and set up a Scalextric because it was so big and the rooms offer a flexible space.”

Mrs Boddington, a marketing consultant, said: “Because it is such a big house, everyone has their own space, you don’t ever feel crowded.

“One of our sons and his girlfriend moved in during lockdown and worked from home, like us, and there was plenty of space for us all.

“I also look after two young children and in the family room they can be with me so I can keep an eye on them while they also have lots of space around them. Although it is a big house we do have the benefit of being able to have that close contact.

“What I love about it is the master suite. For me, it is my own private space. It doesn’t matter how many people are in the house — even when we would host a crew for Henley Royal Regatta — I could close my bedroom door and I would have a great space where I would never feel imposed upon.”

The property also has a cellar, which is accessed from a door beneath the staircase. It is divided into two main rooms with shelf-lined walls and light and power.

Outside, the couple have also done a lot of work.

The rear garden is surrounded by high brick walls with mature trees. There is a wide lawn with mature ornamental beds with shrubs and many climbing plants.

Mr Boddington said: “When the previous owner left, the garden was a bit of a building site and there were bits and bobs lying about.

“One thing we found was a lot of York stone that had previously been in the old scullery at the back of the house, which is now the family room.

“I used that to build the patio where we get the sun late in the day.”

There is also an artificial turf pitch which Mr Boddington and the family would use to keep fit and play outdoor sports, such as table tennis and hockey, all year round.

The house backs on to open countryside and the bedrooms enjoy views to Watlington Hill. Mr Boddington said: “You are two minutes’ walk from the recreation ground so people with children can walk there and also to the cricket field and within 10 minutes you are walking in open countryside.”

From the front of the house across the road there is a view over fields up to the White Mark on the hill and The Ridgeway.

The White Mark is a chalk triangle carved into Watlington Hill which, from the correct angle, makes the Church of St Leonard look like it has a steeple. This was on the whim of local squire Edward Horne in 1764.

Watlington is full of independent shops, award-winning restaurants and pubs. It doesn't have its own railway station but is central to a several mainline stations such as Henley and Cholsey (eight miles), Princess Risborough (nine miles) and Wycombe (11 miles) with trains to London Marylebone station.

Mrs Boddington said it would be a wrench to leave their home of almost 25 years but the time was right to do so.

She said: “We have got to think about our next stage of life. It is a family home and it should be used as such. The house is too big for the two of us.

“We still want to stay in Watlington. We are looking to downsize but we wouldn’t want to move far away.”

• Westfield House has a guide price of £1.7 million and is available through Philip Booth estate agents, of Station Road, Henley. To request a viewing, call (01491) 876544.

RESIDENTIAL property transactions have increased by 40 per cent for a Henley legal firm. Blandy & ... [more]

THE commercial team at Simmons & Sons estate agents has expanded. John Jackson, who lives in ... [more]

A WOMAN who finished renovating her home two months ago is selling up to move closer to her parents.... [more]