Victorian period home taken back to its roots 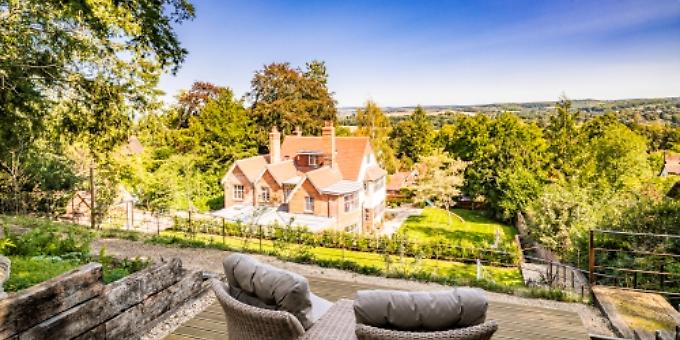 THE owners of a Victorian period property are selling up to pursue a childhood dream.

Neil Bannister and his wife Louise have put Yew Trees in Streatley on the market so they can buy a second home on the Cornish coast.

The couple, who bought the six-bedroom detached home in February 2017, have enlarged, modernised and refurbished it throughout.

They put the finishing touches to it only recently, but time spent in lockdown during the coronavirus pandemic has given them a new perspective on how they want to live.

Mr Bannister, 46, said: “Like a lot of people, over lockdown we had a lot of time to think about what was important and what we wanted to do.

“I work from home now and will do for the foreseeable future and now is the right time to realise a childhood dream of mine to spend more time in Cornwall.

“I used to spend my holidays there as a child and, as a family, we have spent a lot of time there.

“We like the idea of buying a home in Cornwall, to spend the weekend or school holidays there and to enjoy it while the children are still young.”

The family are still looking to buy a family home locally because they have grown attached to the area, having previously lived in Goring for eight years.

The Bannisters came across Yew Trees because they wanted a bigger space for Sophie, nine, Harry, seven, and Jack, five, to grow up.

Mr Bannister, who is a chief financial officer, said: “We were looking for a bigger home. We were in a four-bedroom house before. Jack had just come along and the house was feeling a bit small.

“My wife was not too impressed with the idea of moving, having just finished doing up our last house just a month before but, when she saw Yew Trees, she liked it as well.”

Mr Bannister said Yew Trees had been vacant for a while and needed lots of work doing to it.

He recalled: “It was fairly unloved and sad. The house had damp and the garden was overgrown, it was a bit of a mess to say the least. It needed a lot of work doing to it.

“It was very run down so we did a basic refurbishment to make it comfortable, such as fixing the electrics and repainting, while we decided what we were going to do.”

For the first year they began landscaping the garden, which opened up views of the Chilterns.

Mr Bannister said: “We had a large ash tree at the top of the plot, which was beautiful but was looking unhealthy. We had a survey done which found that it was dying and because of its size we were advised to take it down. Removing this and a few other trees opened up the most amazing view.

“We then started to ask ourselves how we could use this view. We decided to dig out at house level to increase the size of the garden and create a second garden at the first-floor level and to return it to an informal woodland feel.

“We lived here while that was all going on and it was fairly hair-raising at times as we removed 2,200 tonnes of mostly chalk earth off site, which is difficult to dig out as it is but this was during one of the wettest periods on record. It was quite a challenge of engineering.”

The couple wanted the garden to mirror the design of the house and so used reclaimed 100-year-old sleepers for some of the less formal parts of the wall.

After about 18 months, they applied for planning permission to remove a lean-to utility area and build a single-storey extension to create a large kitchen/dining room.

Mr Bannister said: “Although it was a big six-bedroom house, it had only a small kitchen before, which overlooked a neighbouring property, so we wanted to reposition it to make the most of the outdoors.

“We put on a big single-storey extension from front to back with Victorian-style rooflights to bring light in and so the front of the kitchen, with its sliding doors, overlooks the garden and the kids can run in and out.”

The couple then set about refurbishing the rest of the house and Mr Bannister admits they underestimated how big a job it was.

He said: “We liked the fact that it was Victorian and more than 100 years old but it lacked the character you would expect of a house of that age so we tried to introduce that. The cornicing was put in probably in the Seventies or Eighties and was not particularly sympathetic to the house so we put in proper plaster cast creating what was true to the era and did the same for the skirting so everything looked authentic.

“It had lovely parquet flooring but because of the damp problem when we moved in we had to have a lot of it removed but we replaced it with the same style which was battered to look old and we put that down in the reception rooms.

“My wife looked online and found some cast iron fireplaces from the correct era and we thought of all the smaller details.

“We took the house back to its core, all the plaster on the walls and all the plumbing was replaced and we put in all the latest technology. We tried to take a Victorian period house and make it feel like a Victorian period house but equipped for modern living.” He added: “We went from top to bottom because when we started on this we believed that we were building our forever home and we certainly spent more money than we should have done in all honesty and did everything to a very high standard.”

Mr Bannister says one of his favourite rooms in the house is the master bedroom, which has a walk-in dressing room off of it, an en suite and views of the garden, and also the drawing room which he uses both as a formal sitting room and as a home cinema.

He said: “We haven’t had as many parties as we would like to have done but it is a very social house as well — it is great for entertaining. Through the lockdown period where we couldn’t go out we really enjoyed being at home. It feels like a house that wants to be lived in and enjoyed.” The property backs on to National Trust land and enjoys panoramic views of the Chilterns Area of Outstanding Natural Beauty, which Mr Bannister said is hard to beat.

He said: “The one thing we will both miss more than anything is the views from the garden — it is quite incredible. There are parts of this house that I am fairly confident that we can recreate in a new house but visitors have said that they have never seen a view like it.”

• Yew Trees also features four reception rooms, four bathrooms, utility, boot and plant rooms and a snug with a deep bay window and a log burning fireplace. There is also a separate garage. It is priced at £2,650,000 and is available through Warmingham estate agents, High Street, Goring. To arrange a viewing, call (01491) 874144.