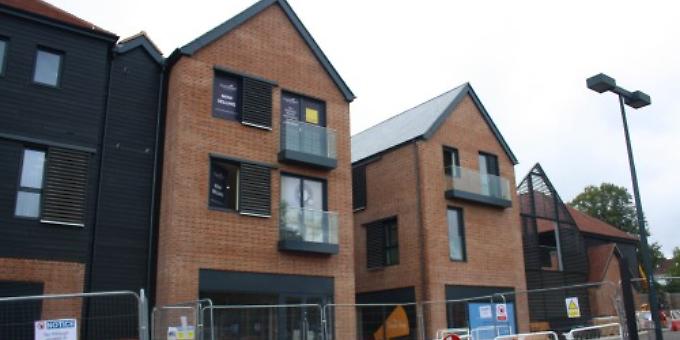 A LONG-AWAITED block of 14 new flats in the centre of Henley is stirring up interest as it approaches completion.

Building work at Gardiner Place, which stands on the former Market Place Mews site between Market Place and King’s Road car park, is set to finish by the end of the month with more than 100 potential buyers now on a waiting list.

Estate agent Savills has held several dozen viewings over the past fortnight, including some repeat visits from mostly local viewers, and says it is confident that the properties will sell quickly.

The 23,000 sq ft development has been in the pipeline for more than a decade and was meant to finally open in the spring but was further held up when the coronavirus pandemic forced building work to stop nationwide.

Contractors were able to resume with social distancing measures once the restrictions eased in early June.

Gardiner Place comprises six three-bedroom flats and eight with two bedrooms, all bar two of which have two bathrooms including an en-suite off the master bedroom.

The properties take up the upper floors of two three-storey blocks, named Albert House and Elizabeth House, while the ground floor comprises nine retail units for which tenants are yet to be found.

Each flat has a single parking place with a charging point for an electric vehicle and there is secure cycle storage while most properties have either a terrace or a balcony.

Other features include a video entry door system, oak flooring, 100 per cent wool carpets in bedrooms, a fitted wardrobe with LED strip lights in the master bedrooms, underfloor and central heating and fibre broadband access.

Prices start at £430,000 with others going on the market for as much as £815,000. Viewings will be conducted with no more than four people inside a flat at once and infection control measures like hand sanitiser and shoe coverings.

The development is named after Remenham landowner Captain Edmund Gardiner, who first suggested that Henley hold an annual regatta, and includes landscaped courtyard gardens with a public open space in the centre.

The passageway between the car park and Falaise Square will be re-opened, as has the car park entrance nearest the town hall. Henley Mayor Ken Arlett, a former builder who visited a show flat last week, says this will help the local economy as it recovers from the coronavirus lockdown.

He said: “Henley Town Council has had regular and constructive meetings with the building contractor Murphy and we’re looking forward to everything opening up again. It was very quiet in front of the town hall without that access but now there’s much more traffic coming through.

“I think the building has turned out better than many people envisaged. The steel frames which first appeared didn’t look promising, but with the cladding and finishing touches it looks very impressive. I struggle to believe the flats won’t sell in such a prime location.

“Coronavirus didn’t do anyone any favours but we’re very pleased to have reached this stage and we’ve had no complaints about it at all.”

South Oxfordshire District Council first awarded planning permission for the scheme to the DeStefano Property Group in 2007 but the project repeatedly stalled before the firm eventually went into administration.

The final version was drawn up by London architect Collado-Collins on behalf of real estate investor Catalyst Capital, which bought the site in 2015.

Two additional flats could be created in a first-floor space which was going to form part of a restaurant or café but the idea fell through. The town council supports the application by Catalyst, which is yet to be decided by South Oxfordshire District Council, the planning authority.

Catalyst says the space couldn’t be used as offices because it doesn’t have a separate entrance.

Paula Gardosi, sales manager for Savills’ Oxford office, said feedback from viewings had been positive and most buyers are expected to be young professionals, older people who are downsizing or property investors.

“The interest in Gardiner Place is very much from people who’ve seen it when the work started or, in some cases, have been following its progress for absolutely years,” she said.

“Most of the people I’ve shown round are either in the older age group or investors. I’ve only seen a few young professionals, though it remains to be seen whether that will change over time. The location is very convenient because everything’s a stone’s throw away and an occupant might well never need to use their car again, although parking is provided.

“We recently had a viewing for an older lady who was losing her sight and this would be perfect for people who don’t want to travel far. No other new developments are as central as this, which will be an advantage for sales.

“It doesn’t yet have the ‘wow’ factor because construction is still finishing but that will be over soon and most people were able to see past that once they had a look inside.

“We can’t say when the development might sell out because the market’s so unpredictable but the initial response has been very promising and once a few are sold, the rest usually follow as people don’t want to miss out.”