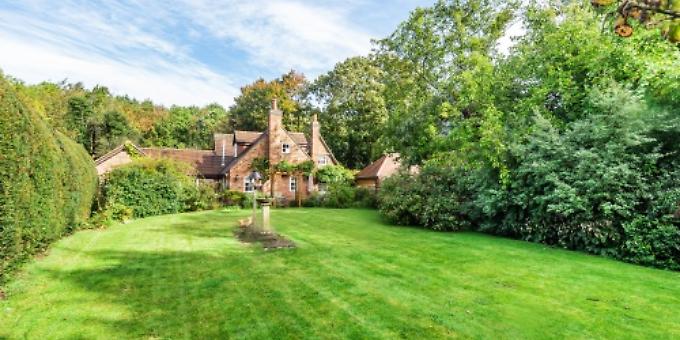 A COTTAGE that once belonged to writer Elizabeth Goudge has come on the market, writes Phil Simms.

The best-selling children’s author lived at Rose Cottage in Dog Lane, Peppard Common, from 1952 until her death in 1984. She was 83.

She bought it with the proceeds of winning the Carnegie Medal for British children’s books in 1946 for The Little White Horse and the making of a film based on her novel Green Dolphin Country.

Goudge once wrote of the “hospitality” of Rose Cottage and said: “The cottage itself is so strong that the moment the front door is opened to a guest I can feel the delight that rises up from its hospitable old heart. I once entertained 30 writers in our sitting room and even above the noise of the 30 all talking at once, I imagined I was aware of the contented cat-like purring of the cottage. It liked it. This cottage knows in its wisdom how much human beings need each other.”

For Karen and Ken Henry, who took on the four-bedroom property in 1999, Goudge’s words are as true today as they were then.

Mrs Henry, 66, said: “It is a lovely house to live and entertain in and the garden is so peaceful and quiet — it has been a joy.

“Elizabeth wrote in her autobiography a few lines about the hospitality in the cottage and we have felt the same while we have lived here. The old part of the house is always very cosy and the new part is wonderful in the summer. It really is a home for all seasons.”

Mrs Henry said the house needed a lot of work doing to it to bring it up to modern standards and about 20 years ago they built an extension to create an open plan kitchen and dining room.

Mrs Henry said: “We thought it was a project we could take on because of all the other benefits, such as it being tucked away and having a large garden and the views across the fields are fantastic.

“When we moved in it was so dark in the living room and the floor looked like mahogany but when we had it cleaned it revealed this beautiful honey coloured parquet flooring. This brightened up the room and was likely to have been put in in the Forties before Elizabeth bought it.

“We added an extension but we wanted to keep the character of the main cottage and be sympathetic to its history so we worked within that and just made it suitable for modern living.”

The cottage was built about 400 years ago and the exposed timbers point to its long history as part of the community.

Mrs Henry, who is secretary of the Henley Society conservation group, explained: “Some of the timbers are very large and were reclaimed from boats that were broken up on the River Thames at Henley so they are steeped in history. There is also a big fireplace that was used by the coach driver’s daughter when it used to be the village launders.

“When we bought the cottage we had a well and we were told by a landlady of the old Dog pub that it was used in the Fifties.

“But we had this filled in by the builders when we had our extension built and it is now underneath the dining room. We also have some of the old deeds and there used to be a piggery in the garden.”

About four years ago, the couple converted their garage into a bedroom with an en-suite so their elderly parents could stay with them. They then built a car port, which they were careful not to have it detract from the front of the property and have made sure it blended into the countryside.

Mrs Henry added: “I particularly love the history of it and everything we have done to the house since has been sympathetic and
in-keeping 100 per cent with the house.”

One of her fondest memories was in April 2008, when a blue plaque was installed at the cottage to mark the residency of Goudge.

“It was a fabulous day,” Mrs Henry recalls. “We expected there to be the lord lieutenant and a couple of people who brought the plaque but we had a packed house. I was asking friends to bring cake and tea.

“We did know about Elizabeth when we bought it, that she was a big children’s writer in the days prior to Enid Blyton, and only the other day we had two ladies come round asking if they could take pictures as a new biography was being published.”

• Rose Cottage also features a south-facing garden with countryside views, a double-width living room and a study. Davis Tate estate agents in Henley is inviting offers of more than £1 million. To book a viewing, call (01491) 412345.