From industrial site to luxury estate 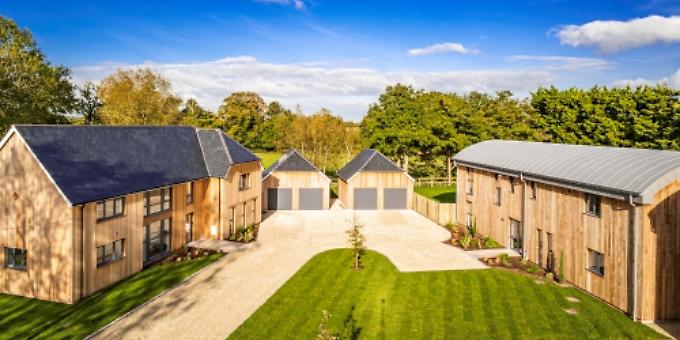 A FORMER industrial and agricultural site has been transformed for housing.

Five properties have been built on land that sits on the fringe of Cholsey village and adjoins open farmland with its own brook.

The project took two years from start to finish with the building work at Abbey Close being completed last month.

Developer Matthew Fenton, of the family-owned Fenton Group, has now put three of the homes up for sale.

Mr Fenton said: “It took about two years from start to finish, although we had to stop for two or three months due to the coronavirus pandemic.

“The site previously had some old farm or industrial buildings so we had to replicate that, which is why the design includes barrel roofs and cedar cladding to be sympathetic to the rural nature of the site.”

Numbers one and two Abbey Close are detached. Both properties come with a detached garage which together provides more than 3,000 sq ft of living space.

Number three is semi-detached and is eligible for the Help to Buy Government scheme.

All three properties are cladded in cedar wood, although number one has a slate tiled roof and numbers two and three have a curved zinc roof.

In the first two homes, all principle reception rooms lead off a large central galleried reception hall, including the sitting room with bi-fold doors, study, cloakroom, kitchen/dining room and a separate utility room.

Bi-fold and French doors in both properties open out to stone laid terraces, which wrap around the building to make the most of the views and outside living.

The third property opens into the entrance hall/sitting room with views into the kitchen/dining room.

Mr Fenton, who lives in Pangbourne, said he designed the homes to be spacious and make the most of the location.He said: “We designed them to be open-plan because we wanted to create a sense of luxury while making them suitable for a family.

“We sourced the kitchens locally — there is a kitchen supplier about 50m away from the site — and we looked to use local tradespeople where possible.

“The properties all sit on very big plots and are very open to the views across the fields. When we designed the windows and doors we had that very much in mind. It made sense to build homes to take advantage of that, to make it bright and airy and make the most of the views.

“The detached ones also have detached garages with a room above, which could be an office, a gym or a play room. The properties would be suitable for people wanting to move out of London which is the trend at the moment, although we didn’t know that when we started to build them.”

All three properties feature a wide oak staircase which leads to the first floor.

Number one has five bedrooms. The master and second bedrooms have an en-suite shower room and there is a family bathroom.

Number two has four bedrooms. The master has an en-suite bathroom, the second and third bedrooms have en-suite shower rooms and there is a family bathroom.

Number three has three bedrooms. The master has an en-suite shower room and there is a family bathroom. Mr Fenton, who previously lived in Henley and plays drums with the band Lucky to Be Alive, said the development should be popular.

He said: “People like living near the countryside in big plots but they also like having people around. People like the fact that they are in the middle of nowhere but also part of a small community.”

• Numbers one to three Abbey Close are for sale through Warmingham estate agents, of High Street, Goring. The detached properties have a guide price of £1,095,000 and the semi-detached property is £600,000. For more information and to arrange a viewing, call (01491) 874144.