Two-bedroom cottage comes together with its own annnexe 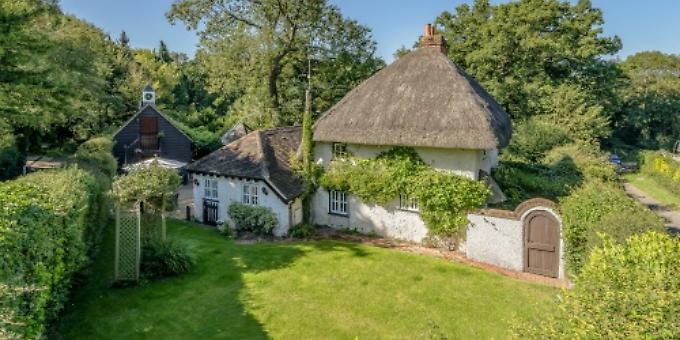 A WOMAN is looking to sell her home to help reignite her eventing career.

Victoria Webster-Luck used to represent Great Britain in horse riding as a teenager and is looking to get back on the circuit.

She currently keeps her horse Cassie in stables but would like to be able to care for her at home and so she and her husband Mark are selling up.

Mr and Mrs Webster-Luck moved into Thatch Cottage in Crazies Hill in July 2018, having moved from London in pursuit of village life and more open space.

The couple were attracted to the Grade II-listed thatched property because of its period features and its transport links to London for work.

Mrs Webster-Luck, 41, said: “What we wanted to do was get out of London and enjoy a rural location while at the same time being close to it.

“Crazies Hill must be one of the most rural locations in Berkshire but we are still so close to London. I can hop on a train and be in the office in under an hour.”

Mrs Webster-Luck, who works in advertising, added: “The cottage is nestled on the edge of woodland and so it’s just so easy to take the dog for a walk.”

The ground floor of the cottage comprises a sitting room, reception room, shower room and an open-plan kitchen/breakfast room which has doors that open out on to the garden.

Mrs Webster-Luck said: “We have completely gutted and renovated the kitchen and put things like underfloor heating in. We spend a lot of our time there — it is the hub of the home.

“In the summer we have the doors open and with its windows and vaulted ceiling it is a very bright, happy place.”

The adjoining reception room is currently used as a reading/study area and has exposed beamed walls. Here is where you find the stairs to the first floor and its two bedrooms.

Next to this room is the sitting room, which also has beamed ceilings and a brick fireplace.

Mrs Webster-Luck said: “Next to the living room we have what we call a reading room where we like to sit and read and this room and the sitting room are very cosy.

“We have always looked to retain the character of the cottage in everything that we have done to make the most of its features. The thatched roof is a brilliant material. It’s been fantastic during the heavy rain that we have had and needs little maintenance, while the walls are thick and so the cottage is quiet while it keeps warm in winter and cool in summer. It is amazing.”

Having no bathroom upstairs hasn’t been a problem for the couple, who say it has not been an issue for them.

One thing the couple did was install a bath in the en suite which accompanies a bedroom in the separate annexe. The ground floor of this features a kitchenette, a downstairs toilet and large reception room.

Mr Webster-Luck, 45, works in the pharmaceutical industry and has been using the reception room as his office.

Mrs Webster-Luck said: “The annexe is a great addition to the house. As well as increasing the living space, if you have people to stay, they can have their own space. It is a great space for entertaining and you can also use it as an office. It has been great for Mark as he can work in a separate space and then close the door.”

The couple have also enjoyed making the most of the garden.

Mrs Webster-Luck said: “When we moved in there was a giant pond to the left of the house and it took up a lot of the garden. We decided to fill it in and create a large open space, which we put up a badminton court in the summer and we sit outside all summer long.

“Just outside the kitchen we put a table and chairs and to the right we have a pergola with a seating area and so we can still sit out there when it rains. We have also put up a table tennis table there and we can sit and have drinks and play games.”

The garden is surrounded by a hedge while there is also an outbuilding, a garage and space for off-road parking.

Mrs Webster-Luck added: “I feel the cottage would be perfect for a single person or a couple, weekenders who want to get out of London and use it as a bolthole, or an older couple who were downsizing or even those with a teenager, who could have their separate accommodation.”

The couple have found a property in Knowl Hill and Mrs Webster-Luck is looking forward to being back in the saddle.

She said: “Since I lived here I started horse riding again, which I did before I went to university. That’s the driving force behind the move. If a suitable house had come up in Crazies Hill we would have loved to stay. We have wonderful neighbours and love the village life but we are not moving far.”