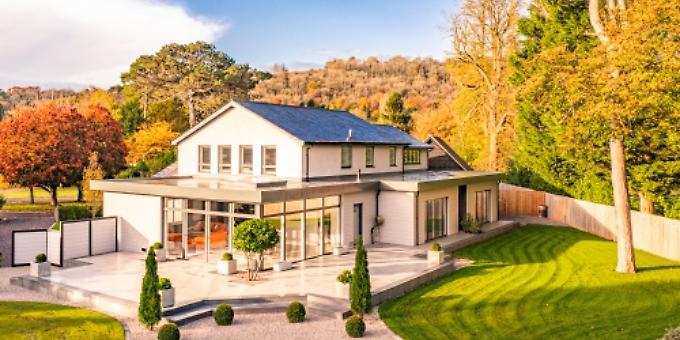 TEENAGERS are hard to please at the best of times so, when it comes to redesigning your home, you would do well to take their views on board.

That’s what Chris Nowell did when he began extending Ridgeway House in Goring in 2017, where he significantly increased the amount of living space.

The semi-retired IT executive bought the five-bedroom property in Long Meadow six years ago with a view to redevelopment as his work began to wind down.

Mr Nowell, 58, said: “I have two teenage children who live with their mother for some of the time in Streatley so I wanted to stay close to them by buying the house in Goring.

“I have self-built a couple of properties previously in Streatley and so I know the area well and houses like this with big plots are hard to come by.

“I knew when I bought it that it had a huge amount of potential. It was just a bit tired and needed some TLC.

“At that stage it was a four-bed, 2,500 sq ft property. I knew that in a couple of years I would be winding down my work so wanted to create a home where you want to spend more time in.

“I also had an aging father who thought he might downsize or move into a granddad annexe so he, along with having two teenagers, influenced how I went about the project.”

Mr Nowell built a single storey flat roof extension to wrap around the original house and added to it huge amounts of glass to give the feel of the garden being an extension of the house.

He said: “I built the extension to have an orangery style and from there I cut into the house and completely gutted and renovated it.

“I wanted something that was very open-plan and very versatile to support a whole range of situations.

“There are areas for teenagers to have their own space away from their parents and I wanted to make the garden more integrated with the house — to connect the inside with the outside.

“As a man living on my own, I also wanted to have a man cave with all the toys that one would expect.

“Having lived in quite a few barns that I’ve renovated I wanted to create something that was really spacious. This is why the rooms are so big — I don’t do small.

“I didn’t want a big home with lots of small rooms, which you would find in a more traditional home. This property needed opening right up to increase the amount of light.”

One of the biggest transformations was the kitchen. Once the extension was built, a former exterior wall was removed to make the room open-plan to create space to include a dining and sitting area.

Mr Nowell said: “The original kitchen was exactly what you would expect of a mid-size home built in the Seventies – it was really small and dark.

“So after the extension was built we knocked down what was the old exterior wall and created a big kitchen which is about 29ft by 29ft. It also has sliding doors and it looks all the way around the garden.

“It’s my favourite part of the house because it is so well thought through and is incredibly light and has a great ambience.

“As part of the renovation the whole of the inside was gutted and all the electrics were replaced. The historical laminate and lino flooring was ripped out and long, wide wood plank tiles were put down. There is some carpet as well.

The extension meant the footprint of the house went from 2,500 sq ft to about 4,000 sq ft and created some internal rooms, such as a cinema room and a smaller, second kitchen.

Mr Nowell said: “With two teenagers the pressure was on to put in a cinema room, which I did. It has special sound insulation and has been a massive success.

“The key for me was to make a house that balanced open-plan and private living. Areas of the house can be shut off such as the cinema room and the man room, which are away from the main area of the kitchen.

“The upstairs space previously had four pokey bedrooms but I knocked some of these together to create three very big bedrooms and three bathrooms.

“This place is very well suited to a couple with two young children, who they wanted to be close to, and those rooms have been fitted to a high standard.

“But there are another two bedrooms downstairs with their own en-suites. So, if you have two teenagers you could give them their own space. This is also where you could have a self-contained annexe. There is a neat kitchen there as well and so it could be separated off. Everything about this place is versatile and flexible.”

When Mr Nowell bought the house, the garden was mostly overgrown so, like the house, he wanted to make the best use of the space.

He said: “The previous owners were very garden proud but they reached the age where they couldn’t maintain it so it was mostly overgrown. It is about half an acre but you wouldn’t have known to look at it.

“I ripped out all the overgrown stuff so I was working with a clean canvas. I wanted to integrate it with the house but I didn’t want something that was high maintenance.

“The house points to the corner of the plot, and the garden wraps around so there are sufficient borders and banks of trees around it to give some colour.”

The property, which was built in 1970, has panoramic views across to National Trust woodland overlooking Streatley.

Mr Nowell said: “The house is in a beautiful quiet spot. It is one of four built in an off-shoot of Manor Road with big trees in between. So while it is a quiet spot you also have a few neighbours so you are not on your own.

Mr Nowell says that with his children now off to university he didn’t want to be “rattling round” a big house on his own.

He added: “I don’t know what I’ll be doing next. I’ll probably go into renting and look for another project.”

• Ridgeway House also features a detached double garage with adjoining workshop/studio. It is on the market through Warmingham estate agents, of High Street, Goring, with a guide price of £2.1 million. For more information and to arrange a viewing, call (01491) 874144.

A COTTAGE that was once used as a ticket office for Henley Royal Regatta has come on the market. ... [more]

TEENAGERS are hard to please at the best of times so, when it comes to redesigning your home, you ... [more]

A PROPERTY management expert in Henley has called for the end of the leasehold system. Alan Draper, ... [more]