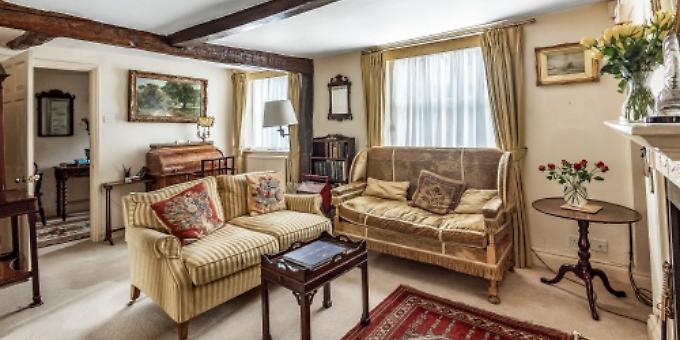 A COTTAGE that was once used as a ticket office for Henley Royal Regatta has come on the market.

Ausonia Simonds, 90, first rented the property in April 2002 after selling the family home in Church Street she shared with her late husband Derek.

She loved living there so much that within three months she persuaded her then landlord to sell it to her.

Mrs Simonds said that she was “thrilled” to buy the three-bedroom property as she and her husband had always wanted to live close to the river.

She said: “My husband rowed at school and his best friend rowed at the regatta. We married in 1945 and I have attended every royal regatta since then apart from one.

“The one year we didn’t attend was when one of my daughter’s was having a prize-giving so we went to this, but she didn’t win a prize.” The couple had discussed moving from Essex to Henley and had looked at a property off Wharfe Lane but they didn’t have the view of the river they wanted.

In the end they bought a house in Church Street instead and moved in 1982 when he retired and added a three-storey extension.

When Mr Simonds, a former secretary of the River Thames Society, passed away about 25 years ago Mrs Simonds decided that she needed to downsize.

She received an offer for her home but had not enough time to find a new one so she decided to rent at first. Mrs Simonds, who has three children and eight grandchildren, said: “I found this cottage and it was an ever so pretty thing — I loved it.

“We persuaded him to sell it to us and we bought it within three or four months of moving in — I was just absolutely thrilled. I just loved the cosy atmosphere and it had enough room for me and to have my family to stay.

“I have a love of antiques and used to work for an antiques shop in Burlington Arcade in London so I love everything that’s old. I just felt that, with the wooden beams, that the house has always had a lot of atmosphere.

“I had them dendro-dated to see how old they are and the ones in my bedroom have been dated back to 1438 and beams in another bedroom dated back to 1532. The sitting room used to be the ticket office for the royal regatta.”

Mrs Simonds, who is a member of the Stewards’ Enclosure and Leander Club, says she enjoys the views from her bedroom window. “I am nosey,” she said. “I used to go up to my bedroom and people watch and it is amazing what you see passing by.

“What strikes me is the amount of dog walkers — or dogs taking their owners for a walk.

“But I also love the river which, together with the bridge, you can also see from the window. It is so interesting to see what’s going on.”

Mrs Simonds said she has enjoyed living next door to the Anchor pub and that the house was a quiet spot. She said: “What’s really nice about it is the sitting room has double glazing and so it is not noisy and the pub next door is such a happy place that you can sit in the garden and there’s a nice atmosphere. The pub also has done great takeaways during lockdown.”

The eastern half of Baltic Cottage formed part of an open-hall house dating from 1438.

A hundred years later, a cross-wing was added to the western end of the building and, perhaps at the same time, a first floor and central stack was inserted to create a two-storey lobby-entry house.

A large new entrance wing containing a suite of reception rooms was added to the east in about 1800 and the older building was externally remodelled and the angle between the two began to be infilled.

Between 1944 and 1966 the house was used as the ticket office for Henley Royal Regatta and in 1976 the house was divided into two properties, with the Georgian riverfront block and half of the medieval hall becoming Baltic House.