Retirement project that benefited all the family 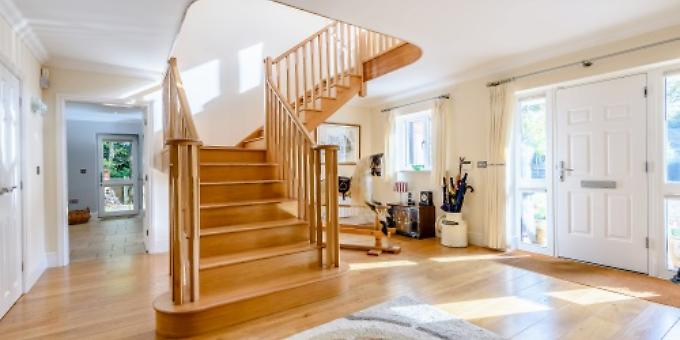 A HOUSE in Lower Shiplake has come on the market for the first time.

Chalcott in New Road was built 10 years ago by its owner Barbara Rowlett and her late husband Mike.

The couple had been on the lookout for a bigger home but found nothing suitable so decided to design one instead.

They bought a chalet bungalow which was on the site and had it demolished before starting again.

Mrs Rowlett said: “My husband and I moved to a four-bedroom house in the Chestnuts in Shiplake in 1975 with our two daughters who were aged five and three.

“We had been living in Holland where my husband worked as an accountant but he transferred to an office in West London.

“We settled in Shiplake because at the time it was a nice and quiet village, was close to the River Thames and Henley and is a great place for walking and has its own station to get to London.”

Mr and Mrs Rowlett spent 35 years there and having seen their daughters grow up they wanted to move to somewhere with more space to look after their four grandchildren.

Mrs Rowlett said: “We did think about moving for quite a time because we wanted something a bit different. Our daughters by this time were married and we wanted to have a bit more space.

“We were living in a four-bedroom house at the time but we wanted to have more space for our grandchildren to stay and play in when they visited.

“We bought a Forties chalet bungalow, which had four bedrooms and a tiny kitchen. We knocked it down because it wasn’t something that you could have altered easily to make it better than it was. We started it in 2010 when my husband retired, it was his project and he designed it.”

Construction of the new detached house took around nine months. It has five double bedrooms and six bathrooms. The ground floor comprises an open-plan kitchen, dining area and sitting room, cinema room, drawing room and study. There is also a wet room.

In the reception hall is a feature oak staircase and a wooden floor.

Mrs Rowlett, who has previously worked as an estate agent, said it was important to them that the living space was big enough for the family to spend time together.

She said: “We have a nice and big room which stretches from the kitchen to a dining space and a sitting space. That was what we really wanted and it’s my favourite room in the house. It is where we can all be together. It is so comfortable and it has a wood burning fire which makes it really cosy in the winter and with the doors that open out on to the garden makes it perfect for the summer months as well.

“We have also enjoyed having the add-ons of a cinema room and a study, which also meant that we could have our own separate spaces as well. It really fitted the bill for us.

“When my husband became very unwell he slept downstairs where there is a wet room and shows how right we were to create the space that we have.

“Most of the rooms are double aspect, such as the study and sitting room. We put windows in wherever we could so that we had lots of light coming in.

“Having the big staircase as a feature of the entrance hall was what my husband really wanted. We had it built by a local carpenter.”

Each of the five bedrooms are en-suite and the master bedroom also has a dressing area and a balcony overlooking the back garden.

Mrs Rowlett said: “The master bedroom is a nice big room with a vaulted ceiling, which really adds to the feeling of space. My husband wanted the vaulted ceiling because when we were looking at houses before buying this we saw one in a house we looked at in Henley and liked it.

“It is lovely to wake up in the morning and to see out of the balcony because you can see over the garden. If it gets really hot you can sleep with the doors open, too.”

The grounds are bordered by a hedge and the garden, which wraps around the house, is mainly laid to lawn, with a variety of mature plants, and there is a stone paved terrace.

Mrs Rowlett said: “The garden has been really lovely for our four grandchildren.

“They all live in London in houses with quite small gardens so it was lovely seeing them play football here. It has been great for us to see them enjoying the space.”

Mrs Rowlett, who has volunteered for the Oxfam bookshop in Henley for more than 20 years, said the house would be ideal for a family.

She added: “It will be perfect for a family with a couple of children. There is enough room for them to have their own space.”

Her husband passed away in November 2018 and she is now looking to move to Henley as it would be more convenient for her to live nearer the facilities and shops that it has to offer.

• Chalcott, which also features a double garage, workshop and summer house, is approached through electric gates. It is being sold by Knight Frank estate agents, of Thames Side, Henley, with a guide price of £1,995,000. To book a viewing, call (01491) 818415.