Hillside home that wows on many different levels 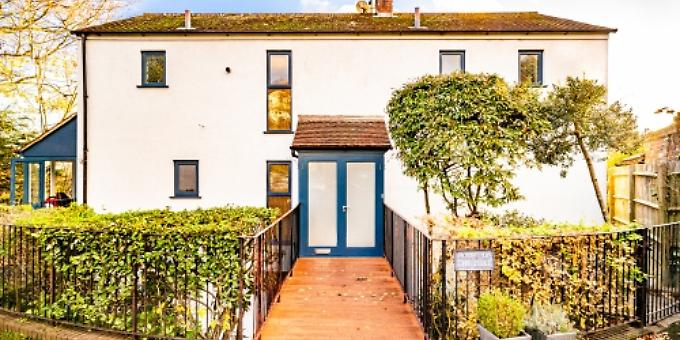 LOOKS can be deceiving and, more often than not, if you look a little closer you might find something special.

From the front of The House on Hill in Whitchurch you could be forgiven for thinking that there’s not much to it, but from the back it’s a different story.

Built in 1984, it was applauded at the time by Tomorrow’s World as a house of the future. The front is part white rendered with a contemporary feel, while at the back the true scale of the living space is revealed.

Spread over four floors, boasting open-plan living, the rear displays a mix of mainly glass, wood and solar panels with a balcony to make the most of views that go on for miles.

Victoria and Andrew Arthur bought the six-bedroom property in Hardwick Road in December 2005 following a fruitless search for the ideal period property.

But when they had a viewing and took in the scale and potential, they felt it was something they couldn’t walk away from.

Mrs Arthur, 46, said: “We were looking for a period property for about 18 months but we didn’t find somewhere that ticked all of our boxes.

“When we saw this house, it was modern and out of our comfort zone, but we couldn’t see past the views from all the windows out towards the back.

“It all happens at the back of the house and the views from the balcony and the bedrooms are just amazing. You can see for miles.

“What we liked about it was that it wasn’t showy. When we bought it, it was expensive, but from the front it doesn’t look expensive.

“While it doesn’t have a lot of kerbside appeal, when we invite people into the back they are just blown away. The fact that it is very understated is what we love about it.”

When the couple moved in a “fancy” kitchen had just been installed and they decided to renovate several of the five bathrooms. Four of these are
en-suite.

But the biggest changes the couple made were outside, where they installed a decked terrace and a swimming pool.

Mrs Arthur said: “When we decided to buy the property we could very much see the potential in it. We put in a swimming pool and the decked terrace in the first couple of years.

“The opportunity to have the pool presented itself when our neighbour’s house was being built.

“When it became a bit of a building site, it meant we could use them as an access point to our garden to bring in a digger and create the pool. We wouldn’t have been able to do it from our side because you have to go down steps. It is so private — it is not overlooked and feels very secluded.”

Mr Arthur, a sales director, and his wife, also repainted the exterior of the back of the house.

“It was this ugly brown colour before,” said Mrs Arthur. “We changed it to blue and when the sun shines on the back it looks like grey/blue glass.”

When the couple moved in their daughter Evangelina was eight months old and son Jacob was three and they say it was an ideal place to bring them up.

The lower ground floor has bedroom two and three as well as a study that can become bedroom six.

The garden level floor has the fifth bedroom and an open-plan sitting, dining room and kitchen which open on to the decked terrace.

Mrs Arthur said: “We generally live on three of the four floors. You come in on level three, which is where the kitchen is. You would think having four floors makes living in it disconnected but it’s far from it, I can walk around the open plan kitchen and living space. But because it is on four floors if I want to get away from it all I can go on another floor or go to my bedroom. It is to be seen to be understood really.

“On the bottom floor there is a bar and a kitchenette where we used to run an office. My teenagers would go down there with their friends and stick a pizza in the oven and watch movies.

“We now use it as an air B&B and it has been really busy since we opened it in October last year with some repeat guests. I had a builder who lived in Shropshire but was working locally and he came to stay here for anything from a weekend to 10 days. So it can also be used as a self-contained annexe, the house does offer flexible living.”

The family moved to South Africa for four years, returning last year, and in that time rented it out to a couple.

Mrs Arthur said: “It really is suitable for families and also couples and is great for having friends round. When we put the bar in we became known as the party house.

“I had a few friends round in August for my birthday and it was the six of us in the garden and some had a swim while we drank champagne. We love it and our friends love it, we have been so happy here.”

Mrs Arthur says she will miss the views when they move on.

“I like to sit out there on the balcony in summer if I don’t want to go down to the pool and there is a tree in front of the kitchen window that in September and October is bright red and so beautiful.

“There is also a tree in the distance which I love to see change and from where I’m standing you can also see rooftops. It is really nice to be this high up.

“The space does work well and it is quite modern. I love the back of the house and the outdoor space.”

The couple are now planning to downsize and buy a property in this country and in South Africa, where they have family.

Mrs Arthur said: “We just loved living in South Africa, the people and the way of life. We have had lots of visits there and it is our dream to have somewhere to live out there.”

• The House on the Hill also features a detached double garage, log store, garden shed, utility store. It is on the market through Warmingham estate agents, of High Street, Goring, with a guide price of £1.4 million. For more information and to arrange a viewing, call (01491) 874144.
• A report on Orchard Lodge, Checkendon, in last week’s Henley Standard, said it was priced at £650,000 but should have said £1.325 million. We apologise for this error and any inconvenience caused. For full details on the property, visit www.henleystandard.co.uk/news/checkendon/157539
/eat-in-or-out-at-our-lockdown-lodge.html