Pat’s number one in property game 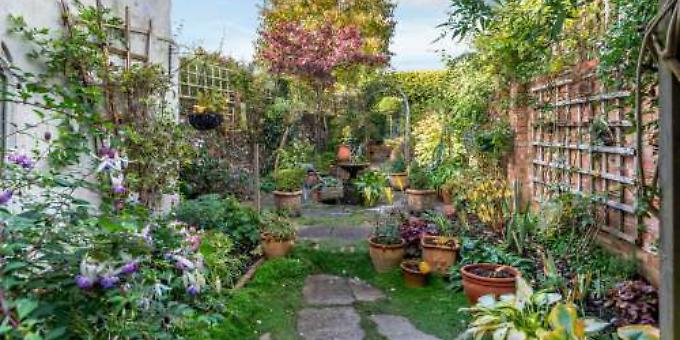 TO be number one in business or the arts is a triumph of achievement.

But for Pat McKenzie the top spot is a way of life.

She has had two number ones in Henley and one in Wargrave and has set her sights on a flat in a Devon retirement village with the same single digit.

Mrs McKenzie is selling Boundary Cottage, 1 Northfield End, which she bought with her late husband Malcolm in 2000.

The Grade-II listed Georgian townhouse, with trailing wisteria at the front, is arranged over three floors.

Mrs McKenzie, 82, said: “We moved to Boundary Cottage to downsize and because my late husband was disabled, he needed to be able to walk to the shops safely. I was born near the river in Twickenham and I feel deprived if I don’t see it every day. When we lived in Wargrave I could see the river and from here I have only a short walk.

“I have always liked Henley, it is a very vibrant little country town.”

The three-bedroom property was built around the 1760s and has many original features, such as fireplaces and coving.

There are three reception rooms, with a grand first-floor drawing room, plus a basement.

Mrs McKenzie, who is a trustee at Phyllis Court Club in Henley, said the cottage needed a lot of work when they moved in.

“It had not had anything done to it since 1950,” she said. “The main bathroom was a glory of avocado and the second bathroom was even gloomier — it was maroon — it really was grim.

“We changed these and redecorated throughout of course.”

Mrs McKenzie also had a Stiltz lift installed, which operates between the dining room on the ground floor and the main bedroom on the first floor.

“I put it in for me,” she said. “My husband died about 15 years ago but I have developed arthritics and rheumatism and other related things you get when you get older.

“When the machine was advertised they used the phrase ‘Beam me up Scotty’ from Star Trek and it is just like that. It is a clear tube and it is self-contained and can be removed easily.

“Most of the cottage was built in the late 18th century. In the 19th century it was extended into the attic where I have two very nice bedrooms and a bathroom.

“In the 20th century, the kitchen was added towards the rear and in the 21st century I added the lift.

“I have paperwork back to the 1800s when it was owned by one of the local butchers who rented it to ‘ladies’ which is rather intriguing.”

Mrs McKenzie’s favourite rooms are the sitting room, which she calls her study, on the ground floor and the drawing room on the first floor.

She said: “Downstairs I mainly use the front room, which I call the study as it is where I have my computer and have had bookshelves put in.

“I spend quite a lot of time there and it can be very interesting to look out on what’s happening outside.

“Upstairs, I have a drawing room, where the television is and both of these rooms have open fireplaces which produce wonderful fires. They have very tall chimneys so there is a great updraft. Being part of a terrace, it is very warm — it is a very cosy cottage. It also enjoys high ceilings with shutters out the front and great views from the back over the garden.”

Mrs McKenzie said it took time to adjust after moving from Wargrave to Henley but has enjoyed living in the town centre nevertheless.

She said: “It was a bit of a shock for me to move from a six-bedroom house in Wargrave with an acre of land to a cottage that is on the pavement.

“But you can barely hear the traffic as it has to slow by the roundabout nearby, so that’s not a problem, and in the 20 years that I have been here I have never been unable to park in the road outside my house.”

Mrs McKenzie loves her garden and has won silver awards in the Henley in Bloom back garden competitions.

“The garden is superb,” she said. “It is small because it is a cottage but I have won silver awards from Henley in Bloom. There is an old fountain, which has a base that keeps the birds happy, and it is very secure. From the bedroom windows you can see the trees out to Friar Park. There is a door from the kitchen out to the garden.

“I also have window boxes which are looked after by WindowFlowers, which also install and maintain the hanging baskets in Henley, so even if I am away it looks like the house is being lived in.

“I had the boxes put in when I first moved because I missed my big garden and I put in the wisteria at the front, which has really taken.”

Mrs McKenzie, who worked as a clinical psychologist, added: “Everybody who has visited, friends and family, seem to love it. They all feel like I do, that it is a comfortable place and it would suit a couple or someone who is single like me.”

When Mrs McKenzie began to think about moving, she had looked at Thamesfield in Wargrave Road then found the same company ran a retirement village in Devon.

She said: “They have a property in Devon, an old priory, which is just fabulous. I have had lots of holidays in Devon and love the area. The flat there that I am in the process of buying is number 1, this house is number 1, the house in High Street, Wargrave, that I lived in was number 1 and before that I lived in number 1 Queen Street, Henley. When it came up I just had to have it.”

• Boundary Cottage in Northfield End, Henley, is on the market with Robinson Sherston and has a guide price of £1.1 million. For more information and to book a viewing, call (01491) 411911.