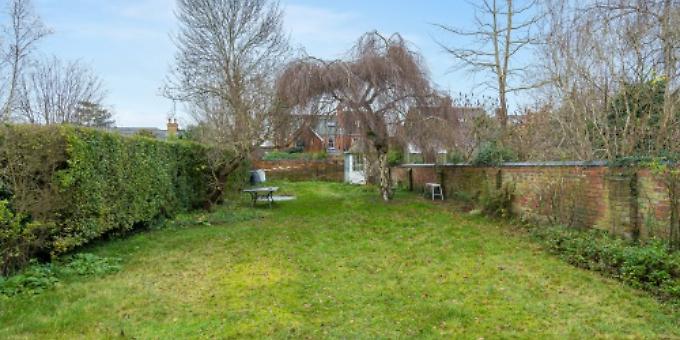 WHEN it comes to raising a family, there’s one road in Henley where they are all doing it.

Alex Templer and his neighbours in Hamilton Avenue enjoyed a socially distanced “street party” just before Christmas where they reminisced about their time living there.

He moved into a
semi-detached Victorian property in 1981 with his late wife Sheila and their two children, Joe and Holly, who were aged two years and six months.

Mr Templer, 74, said: “Before we moved here we lived in Friday Street, Henley, but having just had two children, we knew that we needed more space to watch them grow.

“What we really wanted was a bigger garden and when we saw this house in Hamilton Avenue we knew it was perfect.

“It was close to the railway station and to good schools. such as Trinity and Sacred Heart. Henley had everything that we needed.”

When the Templers moved in, the property had three bedrooms but they decided to extend it to create more space.

Mr Templer said: “We built the breakfast room at the back in 1985 and a side extension in 1987 when we took the opportunity to replace what was the original roof at the same time.

“When we built on the side of the house we moved the front door and by extending out we created an entrance hall. The extension created another bedroom upstairs for my son, who was starting to get bigger.

“The breakfast room we built out of the back used to be a coal house. It opens out on to the garden and in the summer we have the doors open and we might put the table on the lawn and we used to eat outside a lot.

“In winter it is also a great space to be in. My only regret is that I should have built it bigger, as some of my neighbours have done.”

A recessed porch leads into the large hallway, which has a cloakroom under the stairs.

The front room has a large bay window, fireplace and ceiling cornicing and flows into a living room, which were previously two separate rooms.

Mr Templer, who is a retired car dealer, said: “I always liked the open plan sitting room. It’s a great place to stretch out in if it is raining outside and do a bit of exercise.

“Originally the front room and living rooms were separate but we decided to make one big space because the living room was a bit pokey.

“It’s a great social space where the children used to have their friends over but we also used to love watching sport as a family, too.

“The changes created a nice size family space for four people and it really fitted the bill, which is why we stayed here for 40 years.”

To the rear of the property is the utility room and the kitchen, which has plenty of worktop space.

It also leads into the breakfast/dining room that opens on to a patio and the garden, which is south-facing.

Mr Templer, a member of Phyllis Court Club in Henley, is a keen tennis player and is ranked 33 in the world on the senior circuit. He has just moved into the under-75s category.

He enjoyed watching his children grow up in their 100ft garden, where they used to play football and tennis.

His daughter, who is a businesswoman, used to play tennis, while his son is a professional golfer and used to practise his swing at home with the aid of a net.

Mr Templer said his fondest memories of the house were sharing his love of sport.

He recalled: “One of things we did when we created the larger living room was to go out and buy a big TV and subscribe to Sky Sports just because we could watch things like Wimbledon and the French Open. I have always been interested in tennis but when you start work it becomes something you would do to keep fit.

“It is definitely something I enjoy and it’s where my son gets his sporting ambitions from.” Upstairs there are four good-sized bedrooms and the fourth is currently used as a study. There is also a family bathroom and a separate shower room.

Mr Templer said the Christmas “get-together” with his neighbours helped him decide it was time to downsize. He said: “We had a sociallydistanced ‘street party’ where all the people who live here were talking about how they bought their houses in Hamilton Avenue to raise a family and that is exactly what we did.

“When we moved here in 1981 to bring up our two children that was exactly what our next-door neighbours did and so did theirs. History repeated itself everywhere.

“I am now looking to downsize because I just don’t need this much space. I am looking at moving to the middle of Henley because I like the idea of being in the middle of everything while freeing up some money as well.”

The house has off-street parking for two vehicles.

A COUPLE who finished renovating their home towards the end of last year are planning to move on to ... [more]

TWO semi-detached properties in a development on the outskirts of Shiplake have come on the market. ... [more]