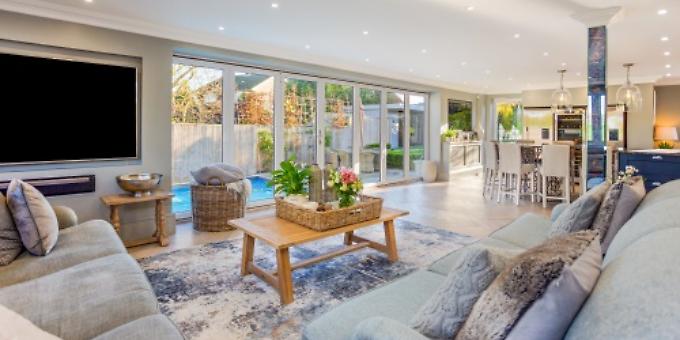 A COUPLE who finished renovating their home towards the end of last year are planning to move on to another project.

They almost immediately began updating and remodelling the property, adding an extension to create two more bedrooms, and renovated every room.

They also added an outdoor heated swimming pool and landscaped the gardens.

Mr Crook said: “We have done everything from taking the roof off to an extension and rebuilding the left wing.

“Every room has been refurbished, replastered,
replumbed and rewired.

“ We had lived in central Reading before but what we really wanted was a country lifestyle for us and our three children.

“When we bought the property it had three bedrooms so we really wanted to have lots more space.

“The property itself had not been touched since the Sixties and was in desperate need of modernisation. You could have thrown a curry on the carpet and not find it for three weeks. We started the work straight away to make it liveable.”

Hunters Moon is a five-bedroom, detached property. The front door opens into a large hallway which has a central staircase that leads to the first floor.

Off the hall there is a cinema room and a large cloakroom with built-in storage and a butlers sink. The main feature downstairs is the open-plan kitchen and dining and sitting areas.

The room features herringbone flooring while the kitchen has plenty of wall and base units and integrated appliances. There is also a large central island with a breakfast bar at one end. The sitting area has views over the fields and countryside to the front of the house and there are bi-fold doors at the side and rear that lead to the swimming pool and back garden.

Mr Crook said that the renovation work was something they kept adding to.

He said: “We didn’t really have a set plan for the work but it was something that escalated as time went on. We did have certain ideas, such as having an open-plan living and kitchen area, but our ideas did also change over time.

“For example, we decided after work had begun to put in lots of glass so we could make the most of the views over the cow fields over the road, which really makes you feel that you were living the rural life.

“The open-plan nature of the living space is what everybody wants nowadays and it really is a lovely space and it is brilliant for entertaining, especially as you have got the doors that open out on to the pool area, where we have a pizza oven.”

Mr Crook, who works as an architectural structural metal worker, said that while the downstairs is predominantly open-plan there is also plenty of rooms to relax in.

“While the rooms are big there is also enough room for people to have their own space,” he said. “We have the cinema room or a snug downstairs and five big bedrooms.”

On the first floor the principal bedroom has a striking triangular gable window overlooking the fields opposite and features a Porcelanosa-fitted en-suite as well as a dressing room.

There are four more double bedrooms and a family bathroom that is also fitted by Porcelanosa.

Outside, the back garden features a large patio area with a barbecue and the pizza oven.

Steps lead up to a lawn with a sunken trampoline and path to a home office/gym.

To the side of the house is the swimming pool while the garden is enclosed by fencing, trees and hedging.

Mr Crook said all the work inside and out was worth it. He

said: “Outside we took 200 tonnes of earth out as we fully landscaped it and put box hedging in all the way around.

“When the sun is shining there is no better place to be than in the garden and, to be totally hones, the lockdowns haven’t been that hard in our house. There are a lot worse places to be.

“I also have a separate office in the garden, which is really nice because you don’t feel like you are intruding on the living space and can keep the two separate, so having to work from home has been easy.”

Mrs Crook said the house really came into its own as a place for entertaining and she had really enjoyed the living spaces.

“To have a swimming pool, a large garden and reception rooms just makes it a great place to live in and entertain, It would 100 per cent suit another family but it could suit anybody really.”

Mr Crook said he doesn’t know where they will move to but guarantees that it will be another project, adding: “We will always make some changes.”

• Hunters Moon, which is accessed via an electric gate, has a guide price of £1.25 million and is available through Savills, of Bell Street, Henley. For more information and to book a viewing, call (01491) 843000.