House with 10 ovens can cater for your every need 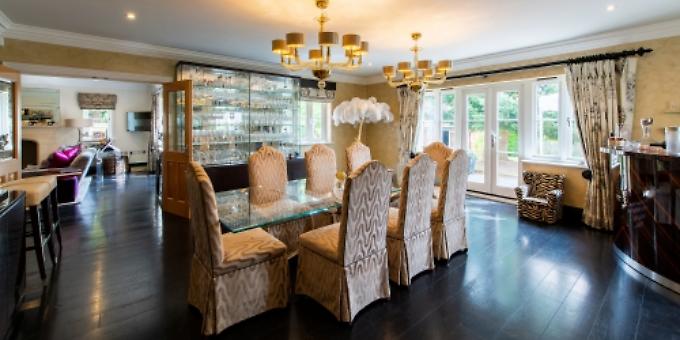 A FIVE-BEDROOM family home described by its owner as a great house for entertaining has come on the market in Shiplake.

A large stone terrace runs the length of the house and the kitchen is equipped with a total of 10 ovens while the garage houses a walk-in wine cellar.

Rosalind Kempner has lived there for five years, having moved with her late husband Nigel, the founder of London real estate specialists Grafton Advisors.

The couple, who have a grown-up daughter, had previously lived in Bix before relocating to London and then settling in Shiplake.

“Nigel was a Henley person born and bred, so it was nice to move back,” says Rosalind, who is Scottish by birth.

“We went to London for about three or four years but then we came back here because I decided I’m actually a country person and not a London person. Here it’s lovely to walk the dogs along the river and just have all the space outside.”

Sadly, Nigel died suddenly, aged 60, while on holiday in South Africa in January 2017.

Rosalind had been happy to continue living at Danes Place, which was built 12 years ago, but the ongoing coronavirus pandemic has altered her perspective and she has now decided she would prefer to live in Henley itself.

“But I now want to move into Henley because it’s too big for me, this house. I’ll still be living in the area and when I’m allowed to see people again I’ll be able to socialise much more easily.

“I have a second home in the south of France and I tend to spend six months a year there. So it’s a little bit of a shame to waste this place when I’m in France all summer.”

Rosalind is a member of a number of local clubs and societies, including Henley Golf Club, Shiplake Tennis Club, the Leander Club and Henley Royal Regatta.

“I will definitely continue doing all of those things after the move. Most definitely. Because in normal circumstances, as well, I would be in London a lot.

“I used to go up to London probably about three or four times a week, so it’s very handy to be able to get on that train, which is five minutes’ walk from the house.

“I’m normally very busy socially in London as well, so it has been perfect here. And of course for Heathrow as well. Very handy to be able to get to Heathrow if you can when we’re allowed to fly again.”

When did Rosalind decide to put the house on the market?

“Well, I think just in this past year, really. It was wonderful here when my husband was alive because you don’t feel overlooked and you feel very much that it’s your own space. But now I would like to be a bit more in touch with people.”

A spokesman for Knight Frank, which is marketing the property , said: “Danes Place is an attractive and substantial detached family home built to a very high specification, including underfloor heating throughout.

“The property sits in a large plot offering generous, flexible accommodation, which is light and airy and has been updated and beautifully presented by the current owners.”

A highlight of the property is the master bedroom suite, which includes a dressing room with built-in wardrobes and an en suite bathroom with a bath and walk-in shower.

The upper floor is completed by four further double bedrooms, all with fitted wardrobes and two with en suite facilities, a family bathroom and a laundry cupboard.

No major alterations were needed when the Kempners moved in, but Rosalind says the triple garage has the potential to be converted into a gym or a grannny annexe, subject to planning permission being granted.

“We’ve got a massive loft here that runs the whole length of thhe house, adds Rosalind. “You could easily build up there as well. However, it’s actually very handy to be able to chuck all your Christmas decorations up there.

“The only thing I’ve got in the garage at the moment is a wine cellar. It’s one of those great big things like an enormous Tardis that you walk in to. If somebody was very keen on their wines it’s the perfect addition to the house.”

What would Rosalind say has been the best thing about living at Danes Place?

“With this particular house I’ve really enjoyed being able to entertain and have lots of people to stay and make use of the garden all summer.

“We’ve got loads of space, a massive television room and the drawing room — so it’s really being able to have friends and family around. Not that you can do that at the moment.

“It flows very well, this house — from the kitchen to the dining room to the drawing room, the TV room and then upstairs. It’s a very friendly house.”