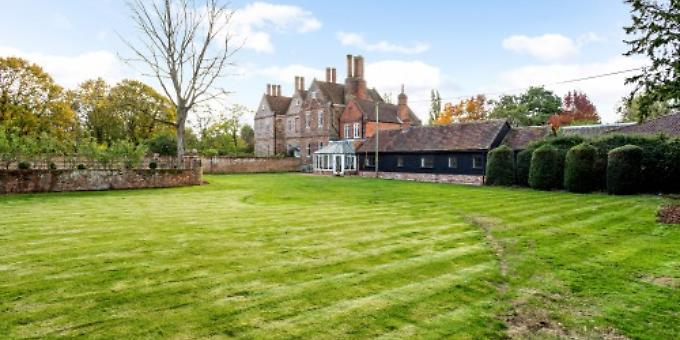 A FORMER hunting lodge dating back to the time of Charles II has proved something of a staging post for one young family.

The north wing of High Chimneys in Hurst, Berkshire, has been the home of Richard Griston and his wife Hannah since December 2018.

The couple, who have a five-year-old daughter and both work in the property sector, previously lived in Putney.

They had originally planned to make High Chimneys their forever home. But then covid-19 intervened.

Richard says: “The main reason we moved out of London was that we wanted more space. And we moved here because the transport links to London are incredibly good.

“But because of covid and what we do for a living, it’s a lifestyle change and we don’t need to be as accessible to London as we used to be. We just want to move further out, is the long and short of it. And it’s a big old pad for the three of us as well.”

High Chimneys, which is Grade II listed, was built in 1661, a year after the restoration of the Stuart monarchy. It was added to during the Victorian era.

Originally owned by the Barker family, it was sold to the Haines Hill Estate and then to the Godsal family in 1919 before being converted into two separate properties in the Sixties.

Outside is a detached triple garage with a room above and gardens of just over an acre, adjoining Dinton Pastures Country Park.

“They basically bought it as a ruin,” says Richard. “The person that had lived there before that had been there for about 40 years and hadn’t really touched the property, so it was pretty dilapidated.”

While the renovations carried out by the previous owners did not involve knocking down any walls, that option is something the Gristons have looked into.

“We wanted to do quite a lot of work,” says Richard. “And then covid came along. But they were pretty open-minded when we spoke to the conservation officer.

“We were just looking to open up the ground floor. You’ve got the original house and then we’ve got a Victorian add-on bit as well. Then there’s a wall that divides the kitchen and the dining area.

“So we were basically going to be taking down that wall and extending out into the courtyard and amalgamating it with the wooden-clad single storey building on the end. And they had no issue with us doing that.”

The planning documents relating to the Gristons’ proposed works are in the public domain.

“It’s all in the planning portal,” says Richard. “We did a heritage assessment, the whole lot, so there’s a lot of information if people want it.”

While the couple weren’t able to see their vision for the property through to completion, Richard is clear about what the main selling points are.

“The gardens are a massive highlight,” he says. “Just having the space that we never had in London.”

Then there’s the spaciousness of the house itself.

“A big plus is the wooden-clad single storey building where you’ve got two bedrooms and a bathroom,” says Richard. “It’s quite good when you have people to stay because they’re basically totally out of the way from the rest of the house. It’s almost like a separate annexe.

“The main central staircase is one of the big selling points too. It’s beautiful — it has got original carving and it runs the length of the house, from the basement right up to the third floor.”

With High Chimneys being marketed by Savills at a guide price of £1,250,000, the family are now eyeing a move to the Cotswolds.

But for Richard and Hannah there is still a lingering sense of what could have been.

“We bought it with a view that it might almost be our forever house because it was so well-connected. The link to London is so quick from Twyford.

“Half the time it’s quicker to actually get to work than it was in Putney because the train into Paddington is so fast.

“The plan was that it was going to work for us for a long time — 15 to 20 years — but obviously covid has been a game-changer for everybody.”