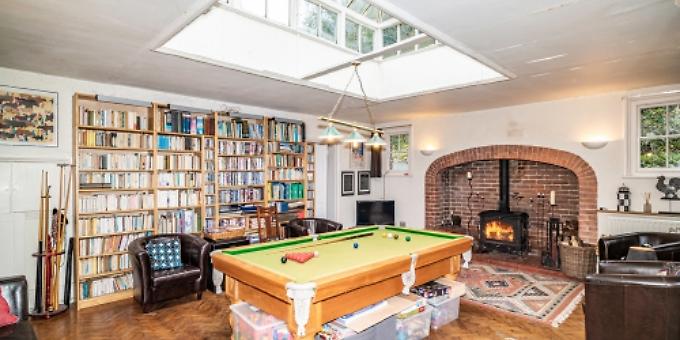 A HOUSE that has been home to one family for the past 43 years has come on to the market.

High View in Wantage Road, Streatley, has five bedrooms, two bathrooms, six reception rooms and three-quarters of an acre of gardens and grounds.

Ray and Veronica Angel have lived at the property since April 1977, having moved there from Lancashire when their children were young.

“They were two and four at the time so it has been a classic family home,” says Mr Angel, “And then for grandchildren as well.

“We moved because of work and because it was a nice commute to where I worked in London.”

The couple are now both retired and Mr Angel says they are looking to relocate to Sussex to be nearer to family.

According to Warmingham, which is marketing the property with a guide price of £1,850,000, High View dates back to 1890.

The property first came on to the open market in 1934, when it was listed for auction by Harrods.

Mr Angel says: “We’ve got some information because, it must be 20-plus years ago, we were visited by the granddaughter of the woman who owned High View in the Twenties.

“She’d been here a lot and absolutely loved it. And she’d come back, incredibly I think from Australia, partly to see it again.

“One little thing we asked her about was this great big dresser, which we found in two parts. We thought when we assembled it that it fitted the house perfectly. It looks as though it’s made for it. and indeed she confirmed it was. We’ve still got it here and it will go with the house since it was originally made for the house.”

High View sits just outside Streatley’s conservation area and is not listed. During the time they have lived at the property, the Angels have made some carefully chosen alterations.

Mr Angel says: “What we’ve done more than anything else is get rid of the Sixties and Seventies inappropriate things and returned it more to what it was like as a classic Victorian house.

“We’ve got rid of the weird fireplaces and the gas fires and things like that that, the Anaglypta wallpaper and a hideous brown Seventies bathroom suite. It’s now nearer to what it was.

“We added a conservatory but we haven’t added anything else because there was so much space already. The house has two great big lofts, which could have been converted to add more bedrooms and a bathroom, but we didn’t feel the need.”

As things stand, Mr Angel says there is scope to add at least one more bathroom without encroaching on the loft space.

He says: “The family bathroom is upstairs and there is a shower room bathroom downstairs. So by modern standards it’s probably not as many bathrooms as some people would want. There are five bedrooms of varying size, one of which is small and someone may want to convert it to an en suite for the master bedroom. It would suit that.

“You could make an en suite for the master bedroom or a general bathroom or both, whichever you prefer. The little bedroom has already got plumbing in it.”

One key addition that the Angels made early on was the installation of a heated outdoor swimming pool. Mr Angel says: “It’s technically an above the ground pool but it doesn’t look like it because it has got decking built around it.

“On the lawn there are French doors that lead into the big family roo and off that is the downstairs cloakroom, loo and shower room, which people use for getting changed.”

For Mr Angel and his wife, being able to entertain family and friends in normal times has been one of the best things about living at High View.

He says: “The dining room with the table we’ve got in there can seat 20 comfortably. We’ve had parties inside for up to 100 people and parties outside for 200.”

With the terraced garden backing on to National Trust land, the property lends itself to inside-outside living. And, as might be expected of a house built in the late Victorian era, High View more than lives up to its name.

Mr Angel says: “You can see the river, you can see right across. One of the great features of the house is that either from the balcony or if you’re going even higher, you can see just about everything for miles looking north.”

It’s a view that is always revealing different aspects of the river valley, depending on the time of day and the prevailing weather conditions.

Mr Angel says: “This morning, I thought, was the most fabulous dark red dawn, which was quite extraordinary. You do get different landscapes all the time. That, for us, has been one of the joys of the place.”

For more information on High View or to arrange a viewing, call Warmingham estate agents on (01491) 874144.

Former estate gatehouse has been brought bang up to date

A FAMILY who modernised a Victorian lodge that formerly served as one of the gatehouses for the ... [more]

A THREE-bedroom cottage has come on the market in Henley for the first time in more than half a ... [more]

Prices slip back from 2020 peak

THE average UK house price has slipped back slightly from its December high, according to the ... [more]

Bishopsland Educational Trust is based in Dunsden RG4 9NR. It is a centre of excellence for training talented ...