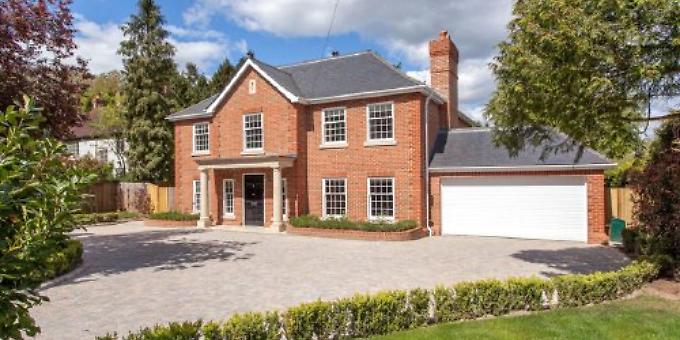 IT wouldn’t normally make sense to liken a house in Henley to a luxury hotel.

But Long Acre in Greys Road is not your usual residential property.

Built in 2015 by veteran property developer Jeff Shean, the house has six double bedrooms, each with its own en suite bathroom.

Jeff, who has worked in countries all over the world, says: “I do bespoke houses and I do big hotel chains. Long Acre has got all the quality of the Hilton. When I took Knight Frank in there, their comment was ‘There’s nowhere in Henley with this level of specification.’ It’s state of the art.”

Jeff has brought his experience to bear on the house with a number of distinctively luxurious features, including a linen lift and a “flying roof” over the breakfast area.

He says: “I was aiming for the highest possible market. When I’ve built houses for myself previously, and having worked for American companies like Hilton, they put their utility room on the first floor where the bedrooms are.

“The reason behind that is that the lion’s share of the linen is the bed linen, so it makes sense. But Long Acre has got a dumb waiter to take the linen from the upper floors down to the utility room in the basement, with all the washing machines and tumble dryers and everything else.”

On the ground floor, the kitchen-breakfast room is arguably the heart of the house, having been designed to maximise the natural light through the use of bifold doors and the flying roof.

“That’s a Canadian idea,” says Jeff, who has also worked in America. “The idea behind it is that you can sit outside if it’s a sunny day in the middle of the winter and it’s snowing or raining and you won’t get wet.

“You’ve got bifold doors that open right up on to the terrace at the back and you’ve got the flying roof above part of it. So you could sit out there underneath the flying roof, which extends about 3m, with tables and chairs, and even if it was raining or snowing you’re still under the roof.”

As you would expect, Long Acre is strong on home comforts.

The bespoke Italian “Pedini” kitchen is fitted with a range of high grade appliances and quartz marble worktops, while the adjoining 32ft drawing room features a stone surround fireplace and French doors that open on to the terrace. With views over the back garden, this is an ideal space for al fresco entertaining.

At the front of the property, which is set in one acre, is a double garage and ample driveway parking.

The front door opens on to a marble entrance hall, off which are a study, cloakroom, family room and the drawing room.

Further home comforts are to be found in the basement, in the form of a wine cellar and a purpose-built cinema room.

“You’ve got surround sound and a home cinema system,” says Jeff. “You’d have to connect it all up again, with Sky and everything else, but all the surround sound can be linked to your phone.”

An integrated Nuvo sound system has been installed and wired throughout the property.

“You can have it in every room,” says Jeff. “You’ve got speakers everywhere. You put an app on your phone and then you can play it from any room.”

Long Acre also has underfloor heating and mood lighting that can be controlled from a main pad in the entrance hall as well as individual pads in all rooms.

Four of the bedrooms are situated on the first floor, with the remaining two on the second floor. The master bedroom has a walk-in wardrobe fitted with wall units, shelving and hanging rails, while the bathroom has a walk-in shower, roll-top bath and mirrored, waterproof television.

“So you can sit in the bath and watch some football if you want,” laughs Jeff.

For anyone who loves sports and fitness, Long Acre is hard to beat.

Henley leisure centre is just around the corner in Gillotts Lane but in the basement, this property has its own gym, changing room, indoor heated swimming pool and steam room.

For keen walkers, Gillotts Field is just over the road, together with public footpaths leading to Harpsden and Rotherfield Greys, while the western end of Pack and Prime Lane starts just a short distance along Greys Road.

“You’re technically in Henley, but only just. If you were a walker you could walk to your heart’s content. So you’ve got the beauty of the countryside but the security of the town.”