Converted cottage that dates back to Elizabeth I 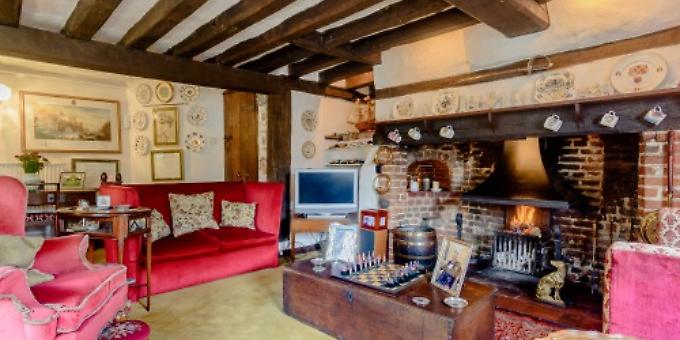 ONE of Henley’s oldest houses is on the market with two of the town’s estate agents.

Ancastle Cottage sits on the corner of Paradise Road and Gravel Hill, just opposite the gated entrance to Friar Park.

The house is believed to have been built around 1580, during the reign of Elizabeth I, and has retained many of its original features, including latticed windows and oak beams in the ceilings.

Brian and Susan Tiptree have lived there for 49 years this month.

The couple raised their two children at the cottage and now have four grandchildren.

“We’re downsizing,” says Mr Tiptree. “I’m 81 and my wife will be 80 in May. And basically we want something smaller. We’ve got five bedrooms, two annexe rooms — the house for the two of us is ridiculously large.”

Ancastle Cottage is believed to have started life as a farmhouse before becoming the town dairy in Victorian times.

Today the property’s walled south-facing gardens are home to a heated swimming pool and a barbecue area with a thatched roof.

“I’ve got a painting which must be 150 years old of a donkey and cart with milk churns at the back door, waiting to distribute milk around Henley,” says Mr Tiptree.

“I think the house was known as the old dairy until there was a doctor of botanics who lived here before the Second World War and he changed the name to Ancastle Cottage.”

“I come from Hampshire, my wife comes from Yorkshire and we moved to Burchetts Green five years before we moved to Henley, soon after we were married,” he says.

“The reason we moved to Henley was that in Burchetts Green we had a tiny little, also very old, cottage.

“Our second child was born and three months later we moved into Henley because we couldn’t expand the cottage and we needed somewhere bigger with two children.”

Ancastle Cottage is Grade II-listed, something that was the case when the Tiptrees moved there in 1972. Despite the restrictions, the couple were able to get planning permission for two lots of works to extend the property.

“The first stage was the swimming pool and the day room with a playroom for the children,” says Mr Tiptree. “That was about 45 years ago — about five years or so after we had moved in.

“Then on the next level up we buit a modern double garage with a utility room behind it.

“And above that another room, a spare room, and a patio for which we actually had planning permission for a conservatory — but we didn’t bother to build that in the end.

“The last extension, which was the one with the garage and the utility room and the room above that, that was 25 years ago.”

One typically British feature of the garden is a former BT telephone box by the swimming pool that now does duty as a shower.

“I bought it at the Henley Show a number of years ago from a company in Marlow that renovates them.

“It was a heck of a job to get it lifted over the garage into position because they weigh two and a half tonnes.”

Not counting the phone box in the garden, Ancastle Cottage has three bath and shower rooms, one of which is en suite.

But according to Mr Tiptree there is scope for another en suite to be created.

“In the early days we sliced off a part of the other large bedroom and put a sauna in there,” he says. “Then we got tired of that and turned it into a massive walk-in wardrobe which could easily be converted back into an en suite bathroom if the new owners wanted to.”

The accommodation elsewhere in the house is similarly flexible.

“We’ve got the dining room, the drawing room, in the old house,” says Mr Tiptree.

“Then we’ve got what we call the day room or sitting room, which is off the pool. So that’s three reception rooms.

“And then the other thing, which we’ve described in the brochure as an annexe, is two rooms above the day room and the garage, which have been used as offices, a children’s playroom, bedrooms for rowing crews staying with us — we frequently have a crew of nine for regatta week.

“They’re two empty rooms at the moment, apart from sort of blow-up beds for the grandchildren to bounce on if they want to. But they could be a suite of offices, a studio, an annexe for an au pair or granny.

“I mean, it could be used for fitness and things like that. You could have an office and a gym up there.

“Also what’s quite interesting and is not mentioned in the brochure is that we have steps from outside beside the garage that lead up to a garden gate and the top lawn area.

“So that if we have people who are cleaning the pool, for example, there’s a separate entrance. You can actually go up the side of the house and you could create almost a separate little dwelling there.”

Because the house sits on a hill, the garden is arranged over three levels. “Three separate areas,” says Mr Tiptree. “Which is rather nice because you’ve got a really private little patio, which is a total sun trap.

“Then you’ve got the swimming pool and terrace with a barbecue area and all that sort of thing.

With a guide price of £1,795,000, Ancastle Cottage is on the market with the Henley branches of Robinson Sherston and Savills.