Grounds Churchill strolled in remain an oasis of tranquility 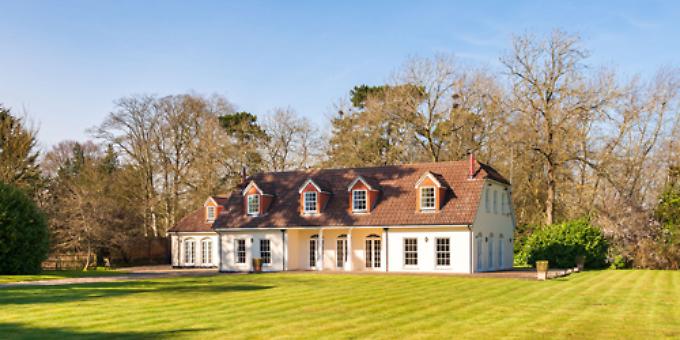 A HOUSE in whose gardens Winston Churchill liked to stroll and smoke his cigar during wartime meetings with General Dwight D Eisenhower is on the market in Hurley.

Accessed via a 400-metre-long driveway, Ash Lawn sits just off the high street in nearly five acres of land.

With seven bedrooms, one of which has been converted for use as a gym, it is currently the home of Mark Marengo, a Savile Row designer who has dressed the likes of Tony Blair and Jamie Foxx.

Despite the connection with Churchill’s cigars, the name Ash Lawn derives from the ancient ash tree by the main gate.

The property is next door to the Olde Bell, which claims to be the oldest hotel in the UK.

Mr Marengo said: “At the back of the property there is a very old wall, about 400 years old, which separates us from the Olde Bell.

“Within that wall we have a door, a very old wooden door, which enables us to go on to the Olde Bell grounds. So we have direct access via the property.

“The story is that Winston Churchill used to go through that door during the war. And he used to come into my garden and smoke his cigars because he used to come to Hurley very often.

Ash Lawn is on the market with Philip Booth Esq in Station Road, Henley. Offers are invited in excess of £3.2 million.

With nearly 6,000 sq ft of flexible accommodation, the house is light and spacious with a ceiling height of 9ft and deep sash windows.

It is ideal for entertaining as most of the ground floor rooms are connected by tall double tulipwood doors.

French windows open on to a terrace and the gardens beyond, offering panoramic views, and there are four spacious southerly facing reception rooms, including a dining room with an open-plan kitchen.

The other reception rooms are the drawing room, sitting room and family room.

Two of the bedrooms are en suite — one upstairs, one downstairs — and both have their own dressing rooms.

The downstairs bedroom forms part of the west wing of the property, which has the option of being partitioned off from the rest of the house to create a separate annexe with its own entrance and the use of what is currently the family room.

Mr Marengo said: “I did it initially for friends about three years ago and then another friend of mine said you should do an Airbnb, so that’s what we did. But it can be an annexe, it can be for the maid or somebody looking after the kids. You can do what you want with it.”

During peak season prior to the coronavirus pandemic, the Airbnb rental was generating an income of up to £7,000 a month, including rates of £500 a night during Henley Royal Regatta and the Henley Festival.

Having closed his Savile Row shop three years ago, Mr Marengo’s London team are now based at Home House, a private members’ club in Portman Square.

He also has a showroom in Manama, the capital of Bahrain, where he is planning to relocate in order to build up his business in the Middle East and Far East.

“That’s why I’m selling my lovely house,” said Mr Marengo. “A couple of years ago I decided to move to Bahrain and develop the Middle East. Because my job is designing and running the company.

“It’s my brother and my team that deal with all the clients, so I occasionally come up to London to meet people I know.

“I mean, I love selling as well. I’m not airy fairy — I love it. But I’m not involved, really.

“My kids are growing up and I just thought, ‘ you know, why not have an adventure and set up in the Middle East?’

“We’ve got the showroom now in Bahrain in the Ritz Carlton Hotel, which is a lovely establishment, and I’ve got two guys there who I’ve trained up and who are running it.

“We want to expand internationally. We have a showroom in Hong Kong as well and we want to open other showrooms around the world.”

Having lived in Hurley for the past 14 years, Mr Marengo plans to return to the area when he eventually moves back to the UK.

He said of Ash Lawn: “There’s five acres of land. It’s all fenced in, so totally dog-proof and all that. And we are right in the centre of Hurley yet we are 200 yards off the high street.

“It’s a really lovely location and we’ve got the biggest plot of land in the village.

“I love the fact that I’m in the centre of the village yet I’m in a kind of oasis of tranquility off the high street, which does get very busy in the summer with cars and people going to the river. I’ve had total seclusion here yet I have people right nearby and that’s what I love about the property.

“And the views. It’s south-facing and I’ve got a lovely view of the hill, which is about half a mile away.

“The wildlife on the property is amazing. I’m looking out of my window now and I can see two pheasants. We’ve got lots of ducks and sometimes you have deer that jump over the fence.

“And for people like me who travel, I’m 25 minutes to Heathrow Airport. If I need to go to Luton or Stansted it’s not even that far. Even Gatwick is just one hour and 15 minutes, so I’ve had the choice of all those airports.

“If I’m going to London I’ve got the choice of two motorways, the M4 and the M40, depending on which part of London I want to go to, or on roadworks.

“If you want to take the train at Maidenhead, again that’s about a 15-minute drive and there’s going to be Crossrail soon. So it’s just an ideal location.

“It’s a totally open canvas, the house. Basically it’s so flexible you can rearrange it as you wish.”