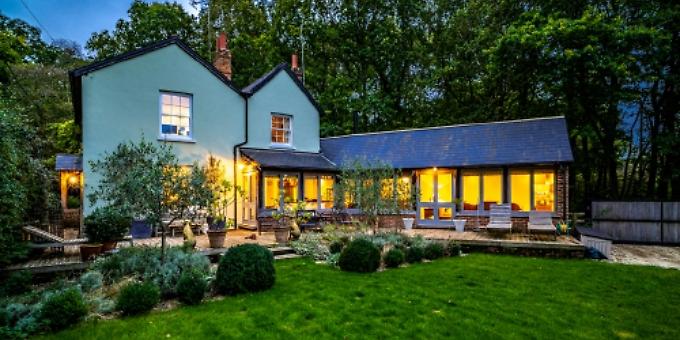 A HOUSE where the Chiltern Queens bus company used to have its offices is on the market in Woodcote.

Greenmore in Long Toll is home to Belinda and Nick Hough-Robbins, who have lived at the four-bedroom property since 2001.

The couple, who have two grown-up children, recently opened the Montpelier Interiors shop in Bell Street, Henley, having previously run the business online from home for 18 months.

In the short term they say they are looking to rent in Henley before buying, while also buying a second home in France.

Belinda, who is a former head of languages at Queen Anne’s School in Caversham, said: “My daughter is going to be buying a place with her boyfriend, hopefully in the next few months, and my son’s not at home any more, so we said, ‘Well, we can have a smaller space and be comfortable with that, and then think about buying abroad’.”

Situated over the road from the junction with Pot Kiln Lane, Greenmore dates from Georgian times but has been modernised throughout by Belinda and Nick.

“When we bought it the house was being used by the Chiltern Queens bus company as their offices, so there were various outbuildings which were mildly unpleasant.

“There was a sort of single skin Sixties office on the side and little bits that had been added on and around it. While they weren’t great, what they did do is they gave us the footprint that we were able to use for planning permission to build an extension, which we wrapped around the end of the house.

“So we’ve got a green oak extension and that gives us this sort of kitchen-dining seating area that’s quite unusual and pretty.”

In normal times, the extension has proved ideal for entertaining friends and family.

“We’ve had fabulous celebrations in that space,” says Belinda. “Dinner parties, whatever — it just lends itself really well.

“What’s nice about it is that you get that continuity between the kitchen and the table and then you can set up a dining area. So the actual extension area is very flexible for use.

“We play with it all the time — we’re always moving things around. We’re like, okay, we’ll put the seating area here, put the dining area bit down there. It’s a really adaptable space. We’ve got Velux windows in the back as well, so it’s flooded with light.”

A set of French doors open off the extension on to a large raised decking terrace that wraps its way along the rear of the house and is perfect for outdoor dining in summer.

“It’s a south-facing garden so you get enough sun to make your olive trees happy,” says Belinda.

“We finished the extension in 2007-2008, and then we’ve just had the garden landscaped a bit because it was never built with parking in mind.

“There isn’t a driveway but we’ve been creative with the parking space at the back of the house, so actually now there is much more parking space — you could get four cars in comfortably if you’re happy squishing around a bit — and we’ve got an electric gate on the back, a sliding one, as that gives you more space.”

According to Belinda, the house and gardens at one time used to provide the fruit and vegetables for the local manor house, which is now the Oratory School. She said: “When we were sorting the garden out I kept coming across lots of smashed glass because it was all from the greenhouses that had been demolished or broken up. There was a big Anderson hut in the garden as well.”

With the couple’s daughter Connie having been living with them during lockdown, all three family members have found themselves working from home over the past year.

“My daughter was holed up working from her bedroom,” says Belinda. “I was in one of the downstairs living rooms because I was doing some Zoom teaching and then doing the delivery and pick-ups and sorting things out before we had the shop. And then my husband basically planted himself in the extension, so he got the best seat in the house.”

A chief data officer in the oil and gas industry, Nick is normally based in London for work.

“And so, of course, as soon as lockdown happened last year, they said to staff that they should all be at home,” recalls Belinda.

“That basically gave him five hours a day of his life back from commuting into London.”

“In fact his operation, I don’t think they’re going to even plan for people going back until January next year.”

At the time the first lockdown hit, the couple had been planning to move into central London to live while continuing to run their interiors business online but the change of circumstances prompted a rethink.

“We looked at what was happening and went ‘this isn’t really going to work, is it?’ It was kind of weird times, so we changed our plans.

“But because we did that, that actually enabled us to set this operation up. Because we then spent the rest of lockdown having masses of furniture delivered and trading. So fortunately we had the space at home to accommodate all of that.”

Surrounded as it is by woodland, Greenmore more than lives up to its name — something that Belinda sees as a distinct advantage.

“The thing is that if you’re walking the dog you can actually just go out the back door. You don’t have to drive anywhere.

“And if I want to go out on my bicycle, which I do frequently, you just go out the door and you’re already in the place where you want to go for a great ride. You don’t have to deal with traffic and all the rest of it.”