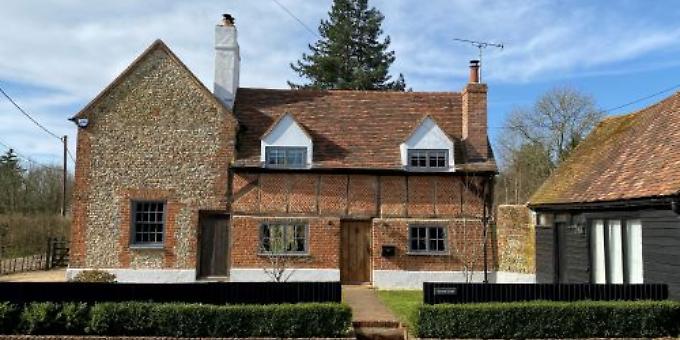 A FORMER village pub that has been extensively renovated and refurbished by its current owners is on the market in Northend.

Sitting just off the village green, the White Hart has been home to James and Tracey Wilson and their daughter Allegra since 2015.

Last orders were called for the final time in 2001 before the premises were sold by Brakspear and converted to residential use.

Vanessa Townsend, head of country homes at Penny & Sinclair, says that with its picture postcard views Northend has been used as a location for many well known TV shows over the years, not least Midsomer Murders and a series of Agatha Christie mysteries.

The sitting room of the White Hart is known to have doubled as Miss Marple’s parlour in one production.

Today the oak beams and inglenook fireplace in exposed brick remain, but the ground floor has been opened up and flooded with light thanks to a series of works overseen by the Wilsons during their time at the property.

Tracey, who is a chartered surveyor, says: “We knocked down a lean-to extension which had been the pub’s original kitchen space and rebuilt and extended that.

“Then we had 5m glazing put in all the way along the back and then also put a similar sort of length of glazing in the bedroom to the rear because we’ve always wanted natural light.

“I think cottages sometimes have that perception of being a bit poky and not much natural light, so that was really key for us.”

The ground floor of the house is mainly taken up by the linked sitting room and kitchen-dining room, with its sliding doors opening on to the back garden of around a third of an acre.

“They’re five-metre sliding doors which you can open either way,” says Tracey. “In fact, yesterday we were sat with the doors wide open, you know, going in and out, have lunch outside. It was that classic example of living inside out.

“I think that goes back to some time we spent in Australia with family — they do that sort of thing so well.

“So that’s always been an inspiration to make sure that the house flowed and that the kitchen was at the rear of the house overlooking the garden, because that’s where the majority of people spend their time — in that dynamic sort of area and kitchen space.

“I wanted to be able to kind of look out and watch Allegra on her trampoline or whatever she was up to when she was younger.”

For Tracey, it was important that the main living space be as flexible and adaptable as possible.

“That’s the joy of the house, to be honest,” she says. “What we tried to do is create flexibility for how we wanted to use it because from what I have experienced as Allegra has grown is that your requirements for that property need that flexibility.

“When she was very small, open plan was great. Now that she’s a bit older, and with everyone having spent so much time at home over the last 12 months, you want a bit more private space.

“So we’ve got a separate snug sort of sitting room where my husband will be sat watching the rugby, my daughter will be sat in the sitting room/living room area while I’m baking a cake or something. But everybody’s got their own separate area, which I think we really need.”

With Tracey mainly based in London for work, James, a tree surgeon by trade, has been the main point of contact for the various contractors the couple have employed.

“He’s done some of the work himself he’s fairly hands on,” says Tracey. “We’ve done everything from rebuilding structural walls — we took the roof off, replaced the roof on the sort of original phase of the house, extended, created the windows and the dormer, which you can see in some of the photos, and then made what was two small bedrooms into a sort of master suite.

“We’ve had all the beams sandblasted, we’ve repointed the flint in the brick, we’ve double-glazed the original windows. And right the way through that we’ve used skilled craftsmen, particularly for the brickwork and the joinery and things.

“We wanted to keep the integrity of the old part of the house but also then open up the rear of it with a much more contemporary feel. I’m quite a big fan of the combination of old and new together but without doing a pastiche on the old.”

Upstairs, the master bedroom has a dressing room and en suite bathroom with a stand-alone bath under the window, double walk-in shower, WC and hand basin.

On the same floor are two further double bedrooms and a family bathroom that has recently been refitted and has underfloor heating.

Outside, at the front of the property, is a timber-clad barn annexe that has planning permission for guest accommodation, though the creation of a dedicated home office would be another option open to the new owners.

“We’ve got permission to create another bedroom,” says Tracey. “A sort of self-contained annexe with a granny flat or space for a nanny. It’s got permission for a shower room and a loo and things.

“For us it was always going to be the way we created that fourth bedroom that would give the opportunity for my mum and dad to come and stay.

“Or if we had friends over the idea was to give us a bit more space, rather than having guests right on top of you.”

Had the family not decided to move on, the refurbishment of the barn annexe would have been their next project.

“We’re at the stage where our daughter has been offered a place at a school in the South West which is quite sports-orientated,” says Tracey.

“She’s very sporty and our family and friends are all in the South West.

“With covid we’ve not been able to see them as much as we would want. They’re not on our doorstep.

“So we want to relocate back down there and also get a little bit more land. We’ve previously had chickens and pigs, so we want the opportunity of having a bit more space around us and a few more animals.”

“We’ve got the planning permissions for, I guess, how to make the house of our dreams,” says Tracey.

“We have a permission to extend one of the bedrooms to make it bigger up on the first floor. But we decided that we didn’t really need to do that because we were going to do the barn annexe conversion at the front and that would be our fourth bedroom.

“We also just amended the planning to create a slightly different configuration of the ground floor, just to give another family room, but equally it could be used as a fourth bedroom if somebody wanted.

“The way we’ve done it is that you could live in the house as it stands at the moment. And you could then have a relatively easy extension in the future without it really impacting on your day to day life.

“Because having sort of lived in a building site for several years, I appreciate how horrible it is. So we didn’t really want to do that again.

“But equally the house is in that stage now where it doesn’t need any more work. So if somebody moved in and didn’t want to do anything it’s a really easy lock up and leave-type environment.”

A THATCHED cottage that dates back to the reign of Henry VIII is on the market in Whitchurch Hill. ... [more]

A DETACHED, double-fronted three-bedroom cottage in Fair Mile, Henley, is on the market with Davis ... [more]

RECOVERY is on the way, according to a survey of the commercial property sector by the Royal ... [more]