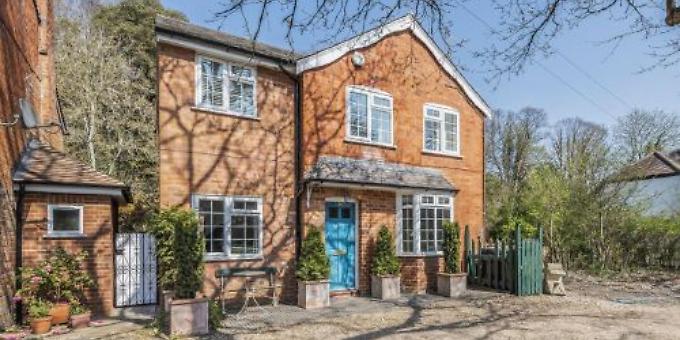 A DETACHED, double-fronted three-bedroom cottage in Fair Mile, Henley, is on the market with Davis Tate.

Set back from the road, along with its immediate neighbours, Jasmine Cottage has a low-maintenance courtyard garden at the rear and is just 15 minutes’ walk from Henley Bridge.

Hugh Rock has lived there since 2017 and last year oversaw the construction of a rear extension the full width of the property.

With its triple vaulted ceiling, eight roof lights, sliding doors and windows that look out on to the garden, the space currently houses Hugh’s grand piano and is used as a music room.

“I was brought up to play the piano and I wanted to have a nice concert hall-type place,” says Hugh, 68.

“On Fair Mile we’ve got that beautiful view over the woods at the back but the old house didn’t look at it at all.

“I wanted to take advantage of the view, so that’s why I put the extension on. It took a while in the planning but it was finished about six months ago. It was a lockdown build.

“I had a builder in and it worked very well because I was living in the house but the extension is out the back.

“They would come round the side so that we didn’t have to mix or anything, so it worked pretty well.”

Jasmine Cottage itself is not listed, but the brick and flint wall to the rear of the property is.

“That’s the Fair Mile wall,” says Hugh. “It runs for a mile from right down by Henley Rugby Club up to the top of Fair Mile.

“I’ve done the garden to make a feature of the wall. It’s beautiful to look at with trees at the back, so the wall became a feature in its own right.

“The garden came after the extension. It’s small but it’s a sunny spot and it’s ideal for sitting out if you’re happy with a small patch, which I am.

“I mean, the real garden is out the front, because the whole of Fair Mile is like a country park. It’s been wonderful during lockdown — people coming out cycling and walking and bringing the baby out in the pram.

“You step out of your front door and you can go for a walk in either direction under the trees. I mean, the council maintain it and it’s just lovely to step out into.”

Having previously lived near Twyford for 38 years, Hugh and his late wife decided to move to Henley after their five children had grown up.

He says: “We had a house sort of in the country, just outside Twyford, and my wife and I really fancied moving to town to have a bit of town life and to downsize and Henley was just perfect for that.

“We used to come to Henley every Thursday for 30 years because it’s such a fun town on market day.

“We had a lovely big sort of farmhouse but the children had all left home and we found ourselves rattling around in it.

“We thought let’s have a new life in town and be able to walk to the shops, walk to the river, walk to the library. You know, quite a different thing, really.”

For Hugh, the country flavour of life on Fair Mile includes the red kites that can be seen circling overhead most days.

He says: “We also get deer in the woods at the back, which we can see from the bedroom window. It’s just idyllic.”

Jasmine Cottage’s three bedrooms are all doubles, with the largest benefitting from an en suite bathroom. There is a family bathroom on the same floor, while the downstairs is divided into three main spaces — the kitchen, the sitting room and the full-width family room that Hugh added.

“The sitting room is the cosy winter room with the fire and the dining table in it,” he says.

“The back extension is just a lovely light morning room, a sunshine room. It’s a nice combination having the two.”

While Hugh worked with an architect to design the extension, the project was very much his vision. “A lot of people put extensions on the back of their houses but they usually have a big flat roof and I thought that was a bit boring, ” he says.

“I wanted to make three separate spaces in there, with three vaults. So I call it three boathouses on the back of the house. It looks like three beach huts, if you like.

“The pitch gives it a lovely bit of extra height, the acoustics are nice and it also allows you to have lots of skylights, which you don’t get as many of on a flat roof. So the design really worked. It’s going to be a wonderful entertaining space but with lockdown of course we just haven’t had that chance. We’re just on the verge of it now.

“The parking is fantastic, too. It’s a complete free for all on Fair Mile, whereas in town you’re in trouble, aren’t you? It’s difficult.

“But when we are able to have visitors there’s no problem with any number of people parking, which is really wonderful.”

While Hugh will be sorry to leave Jasmine Cottage, he does have a new project in mind.

“To tell you the truth, I’m a building enthusiast — a hobby builder — and I’ve seen a lovely derelict barn in Wales which is very attractive, so I’m looking for a bit of something completely different,” he says.

“I mean, I’m very reluctant to leave that house. It’s beautiful now, it’s perfect for me and I love Henley, but I’ve got the building itch.

“The attraction is that the barn is completely derelict and I like starting like that — you can have a vision, you know?”

Offers in excess of £900,000 are invited for Jasmine Cottage.