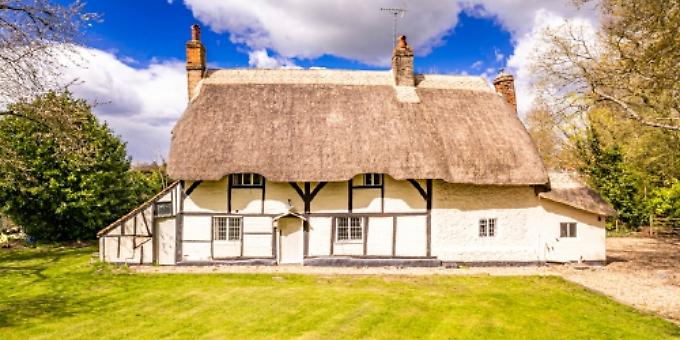 A THATCHED cottage that dates back to the reign of Henry VIII is on the market in Whitchurch Hill.

The appropriately named Thatched Cottage in Bozedown Drive has been home to Peter Briffett and his family since 2012.

Peter, who is the founder and chief executive of financial wellbeing specialists Wagestream, says: “We were only there for nine years but the house has been there since about 1530, I think, so there have been quite a few previous owners.”

With three bedrooms, two bathrooms and two reception rooms, Thatched Cottage is Grade II listed and stands in mature landscaped gardens and grounds of just under a third of an acre.

At the entrance to the property, a timber five-bar gate opens on to a gravel driveway with plenty of parking and space for a garage to be added, subject to planning permission.

The Briffetts have now moved to Highmoor, but during their time at Thatched Cottage they refurbished and modernised the property’s interior.

“We didn’t do any exterior work but we did a huge amount of work inside — bathrooms, plumbing, heating and everything else. We spent a lot of money on it inside, says Peter.

The roof of the cottage has recently been re-thatched.

“We’ve just had it done at the top,” says Peter. “You would call it topping, so it’s had all the tops done and been re-thatched down the side. That was in December/January time, so only a few months ago, but normally you have to re-thatch every 20, 25 years.”

With its traditional Tudor construction, Peter says the property is cosy in winter.

“It’s got really thick walls, a nice log-burner in the sitting room and a big oil-fired Aga in the kitchen, so it’s really nice and warm.”

For Peter, Thatched Cottage is a character property that would be perfect for a young family or an older couple.

“There’s original oak beams in their original walls,” he says. “That’s why they’re sort of 2ft thick. You’ve got original brick walls and then probably original brick floors. So it has got a lot of the sort of Tudor character to it, still.

On the ground floor of the property are a kitchen-breakfast room and utility room, a family room and a double-aspect sitting room.

Two stairways lead up to the first floor — one from the kitchen and the other from the sitting room. Upstairs are the three bedrooms, a family bathroom and a family shower room.

At the far end of the property is a lean-to storage area divided into two rooms.

“There are two big sheds at the back and there’s a tree house in the garden,” says Peter.

“It’s just really nice. You’ve got all the fields around and you’re able to walk in those and there’s a good amount of space all around.

“It’s great for entertaining, it has got a really big garden, everyone loves coming over and the house is great inside as well.”

Like many people, the past year has seen Peter working from home a lot more, but he says Bozedown Drive has a good internet service and he has had no problem making Zoom calls.

“I used to commute into London from there and you can either go from Pangbourne or Reading,” he says.

“You can rollerskate down to Pangbourne station but it’s a bit harder coming back up the hill.

Back in 2015, one of the biggest projects overseen by the Briffetts during their time at Thatched Cottage was the installation of a bespoke kitchen and utility room designed by Caversham firm Griggs & Mackay. With Miele appliances and a butler’s sink, the kitchen features marble worktops and wooden oak units shaped to fit the distinctive contours of Thatched Cottage.

“Because it has got the brick floor we had to build it all into the window frames and the floor,” says Peter.

“Kitchen units, cooker, dishwashers — everything’s built in, basically. So they did it into the utility room and all the way around into the kitchen. There’s wine racks under the stairs and stuff, so they did the whole thing and sort of built it around everything.

“Because it’s an old house it has got sort of no walls straight — it’s a bit all over the place, so they had to build it all into the actual house.”

For Peter, one of Thatched Cottage’s biggest selling points is its secluded location next to a big field and close to public footpaths.

“There are lovely views, lovely walks around there,” he says. “It’s in an Area of Outstanding Natural Beauty.

“You can see all the Thames valley and the hills — you can see into Reading from the top of the hill. There are loads of footpaths around there too.”

Whitchurch Hill village green is close to hand, along with Goring Heath parish hall and the church of St John the Baptist.

Down the hill are the shops, pubs, restaurants and river walks of Whitchurch and Pangbourne and the area is well served by both state and private primary and secondary schools.

Thatched Cottage is on the market with Warmingham in Goring with a guide price of £950,000.