Two became one to make apartment on three levels 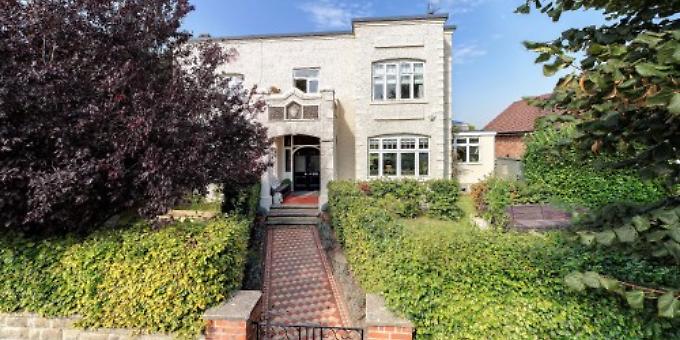 A THREE-bedroom apartment in one of Henley’s most sought-after residential roads is on the market with Savills.

Number 74 St Mark’s Road was originally built as a family villa at the start of the Edwardian era before being divided into four flats in the Seventies, each with its own garden.

Suzi Taylor, who has lived in the building with her husband Peter Lacey, a retired GP, for the past nine years, said: “The house was built between 1902 and 1904 as a single residence, one of the grand old houses of St Mark’s Road.

“We bought flat number one in 2012 and then we saw this opportunity — flat number three was on the market.

“So we thought, ‘Well, if we actually acquire that flat and combine it with number one, we’ll have this really unique property’ because the resulting flat would then be over three levels.

“Flat number three was the smallest in the property it gives us these beautiful sweeping views from the first floor and it looks right over the Thames valley.

“So we thought, ‘This is actually quite cool because we can put these two flats together’ but the really amazing thing was that we could then get this garden, which is quite special.

“We kept peeking over into this big garden that number three had and we were, like, ‘Hmmm, there’s a real opportunity here.

“If we acquire flat three and amalgamate them through a staircase, we’ll get all this goodness.’ So the building now has three flats in it — it went from four down to three.”

Having started out in flat number one, Suzi and Peter’s property is now known as apartment one.

“It’s hard to know what to call it because it’s not really a flat,” says Suzi. “People come in and they just think it’s a house, you know, because the rooms are so grand and have high ceilings and there are the garden aspects and everything.

“We thought, ‘Let’s call it an apartment because flat wasn’t quite right’. Often we just refer to it as number one, 74 St Mark’s Road.”

“There was some structural work,” says Suzi. “And flat three did need a bit of overhauling. There was quite a lot of work because it’s an old property.

“Predominantly the work was around getting flat three amalgamated into flat one and bringing flat three up to modern use and standards. Things like putting in really great insulation.

“Flat one was in very good nick when we bought it in 2012. We haven’t had to redo the kitchen or anything. It was actually really beautifully done.”

The garden has been a longer-term project, but one that has proved its worth over the years.

“One of the things we were keen to do was get that outdoor space really usable,” says Suzi.

“Our formal dining room opens out on to the garden and the kitchen-breakfast room opens on to a patio and a sunken patio into the garden. So it’s real indoor-outdoor living and all that garden space is ours privately.”

Today the garden is arguably one of the property’s biggest selling points, but that wasn’t how things were when Suzi and Peter started work on it.

“To be honest, it was a big mess back there,” says Suzi. “It had a huge old terrible pine tree right in the middle and we had to take out about 12 big mature but really scrappy trees.

“We wanted to just make sure that the native maple tree and the flowering cherry tree were really highlighted.

“Then we put in five multi-stem silver birch at the bottom of the garden and a number of acers and Japanese maples. So many properties have these flat rectangular gardens but this just has this amazing ‘pull you into this new space’ kind of feeling.

“In the winter months, when you’ve got lots of darkness out there, we have uplights at the base of the birch trees and it is magnificent.

“Everything’s lost its foliage, you know, but you’ve got these architectural, beautiful tree trunks that you illuminate.

“You can just be sitting in here on a cold winter’s afternoon at 4pm and these lights go on. And you’re looking either from our living room or our dining room and you just see this — it’s actually quite spectacular.

“So it hs been a progressive thing but we had a very good tree consultant working with us during 2013 to get that structural garden aspect.”

Other highlights of the garden include a large wooden table for outdoor dining under the maple tree and a summer house with a storage area and greenhouse at the rear.

“I designed that to have just one structure built but multi-purpose,” explains Suzi. “So it’s a greenhouse and shed on the back and summer house in the front, all in one.”

Two of the bedrooms are situated on the lower ground floor of the property and the master bedroom is on the first floor, where there is also a study, dressing room and bathroom. For Suzi, the views from the balcony of the first floor bedroom are another highlight.

“When you’re up in our master bedroom and we’ve got the study/office space up there, it is a breathtaking view over the Thames valley,” she says.

“Well, actually, it’s an uninterrupted view because of the shape of the property. You’re up there and you’re just looking straight down.”

The couple are selling up due to Suzi’s work, which is principally based in Australia.

She is a healthcare executive and, like many people over the past year, has been mainly working from home.

“It’s nice to have a workspace because I’m dealing with different time zones,” says Suzi. “It’s very convenient when I’m doing 5am Zoom calls to Australia.”

The couple had lived in Australia for 15 years before moving to the UK, where Peter was born. “We really settled on Henley because it’s just beautiful and a great location,” says Suzi.

“I’d never lived in the UK but Peter was quite keen to be sort of up a hill a bit — not only for the views and aspect and whatnot but just to be away from any potential flooding.”