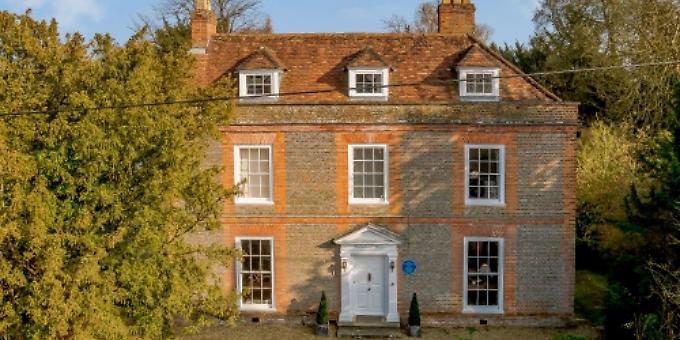 IT provided inspiration for some of the greatest crime novels of the 20th century — and now the former home of Dame Agatha Christie is up for sale with a guide price of offers in excess of £2.75 million.

The popular wordsmith, who created the fictional detectives Hercule Poirot and Miss Marple, bought Winterbrook House in Wallingford with her archaeologist husband Max Mallowan in 1934.

She lived in the now Grade II listed property until her death in 1976 and is believed to have written many of her most famous novels in the house.

The property, which has a blue plaque by the front door in recognition of its famous former owner, is described by selling agents Savills as an elegant five-bedroom home with a Queen Anne façade and later Georgian additions, complete with River Thames frontage.

Stephen Christie-Miller, head of residential sales at Savills Henley, said: “Agatha Christie is one of Britain’s most loved authors and it’s a genuine opportunity for someone to own a piece of literary history.

“She wrote some of her bestselling novels in the house and Winterbrook itself is thought to have been the model for Danemead — Miss Marple’s house in the village of St Mary Mead. Set in about five acres, the property is arranged over three floors with well-proportioned rooms, high ceilings and large windows that provide plenty of natural light.

“Many period features have also been retained, creating a stunning family home full of immense character and charm.”

Winterbrook House is currently the home of Gregor Kleinknecht and Karen Holterman, who have lived there for 20 years with their two sons.

Mr Kleinknecht said: “Winterbrook House obviously has a wealth of history and it has been a privilege to live somewhere that has such a special place in the hearts of so many.

“There was no blue plaque on the house when we moved in and we weren’t aware of the Agatha Christie connection when we first saw the house — we only found out later on.

“Most importantly it has been a wonderful family home. It has been a very happy place for Agatha Christie and so it has been for our family and we will of course be sad to leave. We have enjoyed our time here immensely. However the time has to come to pass it on to someone new.”

Rooms of particular note include the study, library and drawing room — all with dual aspect — while the spacious kitchen leads to a breakfast room with a dining and seating area and doors opening to the garden and covered porch.

A door from the kitchen opens on to the dining room which has French windows to the garden, while there is also a walk-in larder and separate utility room. The generous principal bedroom suite comprises a bedroom with windows overlooking the gardens, dressing room with a range of built-in wardrobes and an en suite shower room.

There is also a guest bedroom with en suite bathroom and a further first floor bedroom with dressing area and door to the Jack and Jill family bathroom. On the second floor are two further bedrooms.

Also attached to the main house is a one bedroom cottage with shower room, kitchen and sitting room. The private gardens include a south-facing terrace with views across the lawns, which run over a ha ha and sweep down to the River Thames.

“The formal gardens are divided with mature hedging and flowerbeds and are planted with a variety of perennial plants and shrubs providing year round colour and interest,” Mr Christie-Miller added. “At the end of the garden there is also the potential to install a pontoon mooring subject to the usual planning permission.”