Former weigh house has front row seat for the Mill 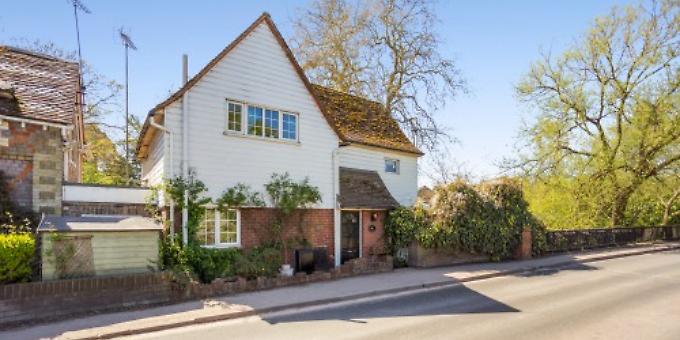 A THREE-bedroom house overlooking the Mill Stream at Sonning Eye is on the market with Savills Henley.

Millgate more than lives up to its name, having originally been built as the place where deliveries of wheat for the former flour mill were brought in.

“It was called the weigh house,” says Alan Smallman, who has lived at the property for the past 20 years.

“They had another entrance, I believe, where the boats brought all the wheat, or it was brought on horses, and they had a gantry-type thing where they weighed all the wheat and then it was put into the mill for the flour. So the house is probably early 1900s.”

Today the ground floor of the property is divided between the sitting room, which benefits from an abundance of natural light, a similarly sized family room and the kitchen.

With its exposed brick and timber beams, the kitchen is fitted with a range of wall and base units.

Just off the kitchen, at the junction with the sitting room, is a downstairs shower room.

The sitting room also opens on to a conservatory, which was added six years ago and enjoys views of the River Thames.

Upstairs are the three bedrooms and a family bathroom.

One unusual feature of the property is a spiral staircase in the corner of the sitting room that takes you up into the largest of the bedrooms. This is in addition to the main staircase leading up from the family room to the first floor.

Alan, whose mother sadly died recently, says that at one point he had hoped it might be possible for her to come and live with him and for them to each have their own areas of the house.

“Upstairs you could actually split it into two parts,” he says. “My idea was that my mother was going to live there and so it would be two halves, really.

With its riverside location, Millgate has direct access to a private mooring that leads through the Mill Stream to the Thames.

To the rear of the house is a paved seating area that is ideal for al fresco dining during the summer months.

A decked area covers the pathway to the mooring and there is a summer house that could potentially be used as a home office or for storage.

Equipped with electricity and
Wi-Fi, the summer house overlooks the river.

“I do a little bit of artwork and stuff, so sometimes I sit out there,” says Alan. “I’ve made like a put-you-up bed and you can go out there and do a bit of yoga or just have a sleep, really. Just listen to the river going past.”

Alan has also made good use of the paved seating area, which in normal times he has used for entertaining.

“There’s quite a large area there overlooking the river and I’d have drinks inside and then you can wander outside and have a bit of a barbecue or a party or whatever.”

Alan’s relationship with the River Thames stretches back to his childhood.

“My parents owned a place down in Loddon Drive and Heron’s Reach at the river there. So I’ve always liked the river and hence why I’m on the river.

“All the fish here are pretty tame because I feed them every day. They’re pets, really.

“I mean, I have friends who come over with their kids and they can catch a five pound chubb if they want. You know, a big fish. They’re easy to catch. So it’s like a giant fish pond.”

Having previously run the Jazz Cafe in Market Place, Henley, and later at the Madejski Stadium in Reading, Alan is a lover of the arts and enjoys having the Mill at Sonning as a neighbour.

“We go and watch the shows, so it’s quite handy,” he says. “The French Horn’s very close by and we’re good friends with them. So you’ve got a lot of stuff going on in Sonning. You’ve got the Bull Inn and the Coppa Club, so it’s nice.”

A keen sportsman, Alan is a cyclist, a climber and a skier.

“I’ve got a little workshop around the corner which is where I put all my bikes and stuff,” he says. “I’ve ridden over to Paris from here before. I do a lot of climbing and I keep all my climbing gear around the side too.”

He also enjoys taking long walks with his dog.

“I just go out the door, across the footbridge and I can walk all the way to Henley or go around the back of Binfield Heath and Dunsden and all round that area.

“I mean, you’ve got seven or eight miles of walking or more. You don’t need to go and get in a car to take your dog out.

“There’s a lovely little woodland there which is all daffodils and bluebells, which I’ve planted in the spring. It’s beautiful.

“Over the last six or seven years, I’ve planted thousands. Any daffodils you’ll see on this side of Sonning, they’re mine. I plant them every year.”

To the front of Millgate is ample private parking for a number of vehicles.

While the bridge gets its fair share of passing traffic, Alan says this is not something that has bothered him.

“The funny thing is, my lounge and other parts of the house, they’re not actually facing on to the road.