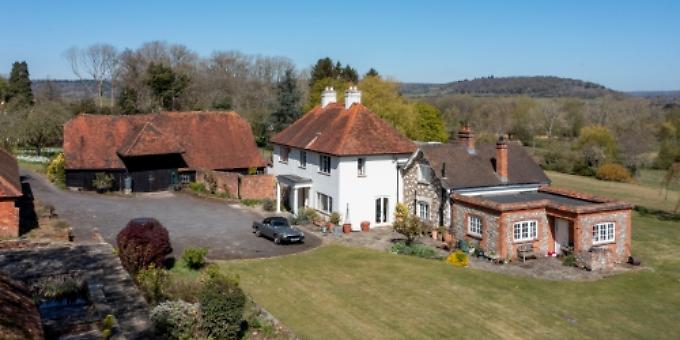 A FIVE-bedroom house that has been in the same family for 55 years has come on to the market in Aston.

With glorious views over the River Thames and unspoilt countryside, Holme Farm sits in just over three acres of gardens and grounds.

Charlotte Every, who together with her younger brother George is selling the property, has lived there since her parents bought it in 1966.

She says there were originally two cottages on the site.

“There was an old gasworks up at Park Place which they demolished and the farmer bought the bricks and built the house. The major portion is from the Fifties and the two end bits are much older.”

Charlotte says that when her parents bought the property, they did a lot of work to improve it.

“They completely renovated it and made it into one family house because it had been two dwellings and the front of the house where you can now see the terrace was a milking parlour, which they demolished.”

One legacy of Holme Farm’s agricultural past are the outbuildings, which include a large period timber-framed and clad barn, with double doors on either side. Estate agents Knight Frank say this could be used for garaging or as an entertaining space, subject to planning.

“There’s masses of storage space,” says Charlotte. “The barn is absolutely sensational and then there are two separate blocks of outbuildings.”

The barn has previously been used as a garage and to keep gardening equipment.

With a mixture of deciduous trees, including cherry, willow and horse chestnut, the grounds are also home to an apple orchard.

There is a recently refurbished all-weather tennis court to the west of the barn and a disused outdoor swimming pool to the east of the house.

“The tennis court’s in good condition,” says Charlotte. “We’ve got a swimming pool that needs a little bit of love.

“It has got heating but it hasn’t been used for three years, so I think you’d most probably want to put in a new heating system and a new filter, but none of that’s difficult.

“The pool is all there, it just needs a very good clean.”

For lovers of the outdoor life, the views from the terrace are matched by the countryside on Holme Farm’s doorstep, with the river a short walk down Ferry Lane from the nearby Flower Pot Hotel.

“It has got lovely views. It’s just got the most unique position,” says Charlotte. “It’s marvellous walking country because there are lots of lovely walks in Remenham and you can walk along the Thames Path to Marlow or you can cross over the lock at Hambleden weir and walk all up through the Hambleden valley.

“During lockdown I’d walk to Ibstone and back — 20 miles — it’s fabulous.”

A driveway leads to a large turning and parking area in front of the house.

Charlotte says there is space for as many as 10 vehicles.

“Quite a few, it depends how people park,” she laughs. “We’ve had lots of good parties here, particularly over the regatta.”

Inside there are character features throughout, including wooden floors, ornate plasterwork and open fireplaces.

The entrance hall leads to the reception hall, with bifold doors that open on to the terrace.

There is also a downstairs cloakroom with a separate WC off the hall, a larder, a utility/boot room, a boiler room and another WC.

The library has fitted handmade bookshelves either side of the fireplace, which has a carved wooden mantelpiece, slate hearth and marble slips.

A door leads through to the dining room, which has a separate door to the reception hall and doors to the terrace.

Upstairs off the galleried landing are the five bedrooms, all of which are doubles.

The principal bedroom suite has an entrance landing with fitted cupboards and an en suite bathroom, while the other bedrooms are served by a family bathroom and a shower room.

“The great thing about the house is that all the rooms are a decent size,” says Charlotte. “It’s a really lovely family home and it has got plenty of space.”

Built in brick and flint, a garden/workshop building in the grounds could potentially be converted to secondary accommodation, subject to planning consents.

Holme Farm is not listed but Charlotte points out that the exterior of the property is covered by a National Trust covenant dating back to 1944 that applies to nearly the whole of the former Hambleden Estate.

“If you wanted to update the interior, you could do anything you like to it,” she says. “I think you’d certainly want to update it because although it has been well looked after, it has been in the same family for 55 years, so it needs some modernisation.”