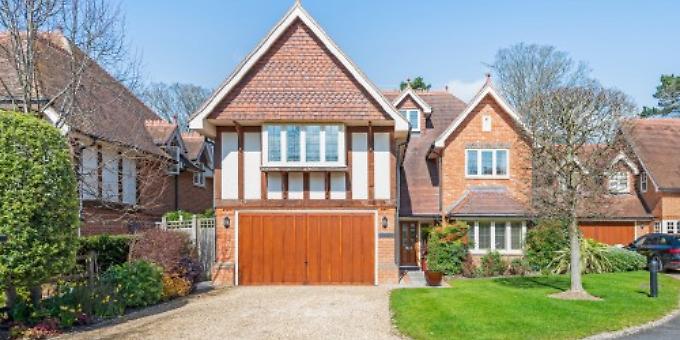 A FIVE-BEDROOM former show home with rooms on three floors has come on to the market in Wargrave.

Montrose in Wyatt Close was built by Millgate Homes as part of a cul-de-sac development of six executive homes off School Hill.

David and Sue Reynolds have lived there since 2007 but are now looking to move back to Henley.

Having previously lived in Parkside, off Gravel Hill, where they raised their three children, they have recently been looking at properties in Laureate Gardens.

David says: “The only reason we moved is that when our kids all deserted us and went to live abroad there was a huge garden and we didn’t want to look after a garden as big as that with no kids around — or grandkids. So that’s why we moved into where we are now in Wargrave.

“Now our kids are permanently abroad, we can’t see any of them coming back — we’ve got one in America, one in Singapore and one in Germany. And during the last year we’ve realised we don’t need all of the space here.”

In keeping with its status as a former show home, David and Sue haven’t had to do much to Montrose during their 14 years at the property, which adds up to 3,200 sq ft in total.

“The only thing we’ve done since we moved in is recently upgraded the kitchen,” says David. “Just put a nice new floor in and painted all the woodwork in more Farrow & Ball kind of colours. We did that in October last year.”

With its vaulted ceiling and skylights, the light and airy kitchen doubles as a family room. There is also a separate utility room with a side door opening on to the back garden.

The other reception rooms on the ground floor are the dining room at the front of the property and the large sitting room at the rear with a fireplace as the focal point and double doors opening on to the garden.

There is also a ground floor study with a range of fitted furniture. On the first floor David and Sue have converted the largest of the bedrooms by area into a media room.

“It’s the largest but because it’s at the front of the house it wasn’t considered to be the master bedroom,” says David.

“We’ve turned it into a media room but it could easily be reconverted back to a bedroom. We don’t use it as a bedroom unless we’ve got a whole crowd of people staying.”

All five bedrooms are doubles and benefit from fitted storage and en suite facilities, with the master bedroom having a full bathroom en suite. David, who is a former managing director of a life insurance company, says: “We’ve got five bedrooms and up here on the top floor there’s a lovely space for another office,” he says.

“My wife uses the downstairs study and I use this space, which is like on the landing, but it’s a perfect space for an office which leads off to the bedroom on the third floor.

“That almost sold the house to us by itself,” says David. “It’s about 23ft long and 6ft wide. We had it fitted out with some shelves and it’s just brilliant to put something in that you don’t really use that often but don’t want to throw away.”

Also handy for storage is the integral double garage, which both David and Sue are able to keep their cars in when needed, thereby freeing up two parking spaces on the drive outside.

In order to maximise the storage potential of the garage, David hired a company called Garage Tech to fit it out with a modular arrangement of units.

“It’s a real feature,” says David. “All the walls are fitted so that you can hang cupboards and move them around and hang bikes — you can put one on top of the other, all very easy. I’m so glad we did it before we moved in. It’s perfect.”

When not in use as a garage, the space is flexible and easily adaptable.

“It has got a beautiful floor,” says David. “We covered the concrete with a proper lacquer. It’s a plasticky kind of material but it’s very easy to wash and keep clean, so the garage is lovely — you could literally eat your dinner out there if you wanted to.”

There is also the option of using the space as a games room or home gym. “You could put a snooker or table tennis table in there,” says David. “During the last lockdown, until a few weeks ago, we hired a cross trainer and put it in there.”

At the rear of the property is a secluded and well-maintained garden that has been designed with hideaway spaces, pergolas draped in climbing plants such as roses and clematis, a lawn, an array of raised borders and patio spaces for entertaining. “There’s a lot of space for tables and chairs out there and the garden was all landscaped,” says David.

“The garden looks fantastic at the moment because it’s all coming into colour. We’ve got the azaleas and rhododendrons now and the roses will be out in a few days’ time.

“And it’s a very manageable garden. It’s not huge. That was one of the attractions that brought us here.”

Montrose is being marketed by the Twyford branch of Davis Tate. The asking price is £1,750,000.

HOUSE sales have eased back but remain above pre-pandemic levels, according to Savills estate ... [more]

Cottage’s views down the valley are ever-changing

A THREE-BEDROOM cottage with a separate one-bedroom annexe is on the market in the Stonor Valley. ... [more]

Country estate being sold as the complete package

A WORKING 478-acre country estate in the heart of the Hambleden Valley is on the market with Knight ... [more]