Town centre cottage has peace and quiet to spare 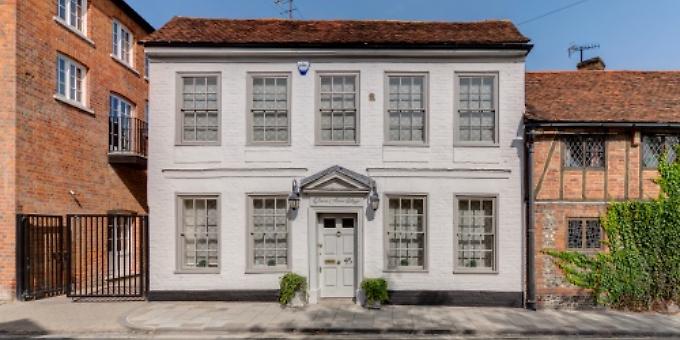 A DETACHED three-bedroom cottage in Friday Street, Henley, is on the market with Knight Frank estate agents.

As its name suggests, Grade II listed Queen Anne Cottage has a long, rich and varied history, having once been a tannery known as the Tann House.

Documents show that the building took its present form some time between 1695 and 1730, a period that coincided with the reign of Queen Anne from 1702 to 1707.

The site later became a foundry and was rebuilt in the Forties, having been used to house soldiers during the Second World War.

From 1954, the cottage was the home of Air Vice Marshal George Brindley Aufrere Baker.

In 1963 he wrote a history of the property, a copy of which was lodged with the town hall before later being reprinted in the journal of the Henley Archaeological & Historical Group.

Today the cottage is home to Alexandra Watkinson, a student of Chinese medicine and acupuncture, and her sister Zara, a chiropractor.

Their late mother, Vivienne Lyle, who died in 2017, bought the house 15 years ago, having earlier founded the Back in Line chiropractic clinic that was first based in Bell Street, then Duke Street.

Alexandra says the main changes her mother made to the property were to renovate the kitchen and to landscape the walled garden to make it an ideal space for entertaining.

The garden is laid with York stone and the flower beds are filled with box hedging and mature plants, with Virginia creeper growing up the walls.

It also has a side gate and a covered well that can be used for watering purposes.

Alexandra said: “The garden was completely different and she made it completely enclosed. It feels incredibly private.

“The beautiful thing about the garden is that living in Friday Street, right in the town centre, normally I could imagine that standing in the garden you’d hear some traffic and footsteps and conversation from people outside.

While the garden is in many ways Alexandra’s favourite “room” at Queen Anne Cottage, she also enjoys the peace that the house itself offers.

She said: “If there’s one room I’d want to sit in and appreciate it’s actually the guest bedroom — the room with all the beams in the ceiling. That room for me is really beautiful. It’s really quiet because it’s towards the back of the house. Literally there’s no kind of sound or anything.

“It has got the history but also the windows look out on to the beautiful red slopes of people’s roofs, so it’s really picturesque.”

Being a student, Alexandra also makes good use of the downstairs study, which has a large bay window overlooking the garden, a working fireplace with marble surround and fitted cabinets either side.

She said: “I use it when I work from home and when I do university work, so it can be used as a reading room or a library.

“It is a bit more tucked away, so you can’t hear what’s happening in the kitchen and what have you because it’s more private and quiet.

“It also has these beautiful bay windows, which are the same with the bedroom above, the one next door to the master bedroom.

“You can see the church and the whole garden as well, and it brings a lot of light in. It’s a really handy office because you can be tucked away and no one would know you were here and vice versa. It’s a really productive room and a good, sizeable area as well. It’s not like you’re cramped in.”

The cottage’s two main reception rooms are situated on either side of the front entrance hall.

With high ceilings, large windows, exposed beams and an open fireplace, one of the rooms is an ideal formal room while the panelled sitting room serves as a family room linking directly to the dining room and kitchen.

The kitchen has a range of fully fitted wooden units and integrated appliances beneath a granite worktop and a large window looking out on to the garden. A utility room and cloakroom are located at the rear of the kitchen, where a door opens on to the garden.

There is another door on to the garden from the property’s inner hallway, where stairs lead down to a two-room cellar that is used for storage.

On the first floor there are three double bedrooms off a central landing that is lit by an attractive window on the half landing.

The principal bedroom at the front of the property has three large windows with window seats and a dressing room with fitted wardrobes between the bedroom and en suite bathroom.

The second bedroom, Alexandra’s favourite room, has a vaulted ceiling with exposed oak beams and an en suite shower room.

The third bedroom above the study has a large bay window and is served by a separate shower room.

Outside, Queen Anne Cottage has two private parking spaces and residential parking permits can also be applied for.

With two more years of studying ahead of her, Alexandra is planning to stay in Henley.

She said: “My degree is in acupuncture so I hope that I’ll be an acupuncturist.

“I’m kind of hoping that I can open up a little place in Henley and treat people here, but I’m not sure what speciality.

“My mum was also an acupuncturist. She helped a lot of fertility cases and I find that really interesting.

“But I also find menopause an interesting subject as well because I know a lot of women struggle with that transition.”