Riverfront cottage's view of the bridge can't be beaten 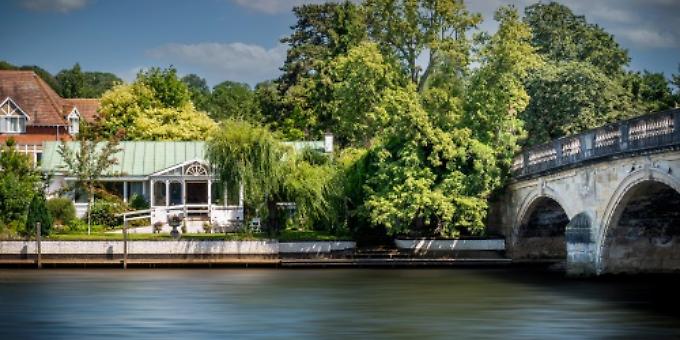 A TWO-BEDROOM cottage next door to Henley Bridge and Leander Club is on the market with Savills estate agents.

As its name suggests, Toll Gate Cottage occupies the site where the bridge’s former toll house once stood.

Toll charges at the time were one old penny for any horse or mare not drawing a carriage and three pence for a carriage drawn by any horse, mare, gelding, mule, ass or beast.

History records that royal carriages and soldiers were exempt from the toll.

In the event it took almost a century to repay the original £10,000 loan towards the construction costs but in March 1873 the toll gate was pulled down to much rejoicing.

With its distinctive green roof, Toll Gate Cottage was built in the Sixties and enjoys unmatched views of the River Thames and Henley Bridge, which is now Grade I listed.

Also visible are St Mary’s Church and the businesses and residences in Thames Side on the Oxfordshire bank of the river.

The single-storey property is located in a no-through road behind secure electric gates and benefits from 90ft of river frontage and moorings. While Henley Royal Regatta taking place this week is a major highlight of the town’s calendar, Toll Gate Cottage offers the chance to enjoy the life of the river the whole year round.

The vendor, Melanie Page, said: “It was my parents’ home for 20 years. My mother would have attended the regatta in her own right with her parents back in the Fifties. They always had boats on the river and that’s where the love of the river came from.”

Before moving to Henley in the Nineties, Melanie’s parents had lived on the River Thames.

“And they did just suddenly decide to move to Henley, I think because they had just always loved it.”

Melanie added that prior to buying Toll Gate Cottage, her parents had lived at another riverside property, Green Isle in Wargrave Road.

She said: “My parents bought Green Isle and then they downsized. They were looking for a bungalow and then Toll Gate Cottage happened to come on the market. It was a stroke of luck.”

Being boat owners meant that Melanie’s parents were able to avoid the worst of Henley town centre’s traffic.

She said: “It means that you can access Henley by river instead of by car.

“So if you were a member of Phyllis Court Club you’d just go by boat — no need to get in a car and do the traffic. You could even go up to Tesco by boat. You would have to walk up Mill Lane but, technically, you could go by boat, tie it up on the footpath and pop into Tesco.

“My father’s pleasure in the morning was taking the dogs for a walk by the river. He always took them for their walk via the boat — he’d take them downriver to one of the fields.”

Toll Gate Cottage also lends itself to friends and family with boats being able to visit by water.

Melanie said: “There’s certainly room for more than one boat, let’s put it that way. On one occasion my parents were able to use a Hobbs of Henley steamer to entertain and of course it could just come and pick everybody up.

“They actually picked us up from the towpath below Leander — I’m not suggesting you could put a steamer alongside the house but the proximity to the water allowed them to be able to facilitate that sort of entertaining set-up.”

A keen paddleboarder, Melanie said that in addition to the garage at the front of the property there is space around the side to store canoes and small dinghies if required.

The west-facing riverside garden is laid to lawn with mature trees, including a weeping willow.

It abuts Henley Bridge on one side, with mature hedging bordering the other.

At the end of the garden, steps lead down to a recently
re-decked area for mooring.

On the other side of the house, steps and a ramp lead up to the front door and there is also a separate secure side access to the rear. Inside, the large entrance hall gives access to each of the main rooms of the property.

There is a kitchen-breakfast room with a range of wall and base units, a walk-in larder cupboard, a separate storage cupboard and a side door.

The drawing room has an elegant fireplace with an electric fire and a large bay window with a seating area looking out on to the garden and the river beyond.

At the other end of the room there is space for a dining area, next to which is a large sliding door that opens on to a triple aspect garden room with large windows and charming views.

On the other side of the entrance hall are the bedrooms, with the principal bedroom being situated on the river side of the house.

Melanie said: “Both bedrooms are sizeable, both have full walk-through dressing rooms, both have an en suite — and they’re almost identical in size.”