Hidden gem’s so handy for popping to the shops 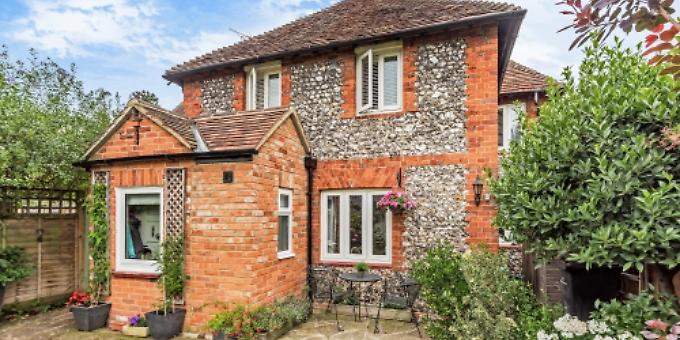 A DETACHED two-bedroom cottage in the centre of Henley is on the market with Davis Tate.

Flint Cottage in West Street has been home to Helen Slade for the past four years.

But having got married in June, she and her husband Ian are looking to move on for the happiest of reasons.

Helen, 65, who previously lived in Seer Green, near Beaconsfield, said: “What happened was I bought this property by myself, as a single lady. Subsequently I’ve met my partner and we got married earlier this year.

“Although the house is very much fine for size for two people, we’ve now doubled our number of children. I’ve gone from having two children to four, basically.

“While they live in different parts of the UK, we need to move to a slightly larger house so we can have them to stay.”

Helen and Ian got married at Henley town hall and had their wedding reception at Badgemore Park, where they are both keen golfers.

Helen said: “We had to have a wedding for 30 people but it was actually fabulous. It was a nice number to have.”

The couple are planning to stay in the Henley area.

Helen said: “We met online and it was all very romantic. Ian comes from Stevenage and he loves Henley to bits — probably even more than me. He retired the same month as covid struck. At that point he’d been living in Stevenage and was just travelling back and forth.

“But he moved in permanently when he retired, so it all worked out very conveniently for us.”

Helen, who is also retired, was originally drawn to Henley for a number of reasons.

She said: “One of my best friends had moved here and I had an elderly aunt who lived along Fair Mile and I used to regularly come and visit her. I looked after her in her latter years because she was a spinster. The other reason was because I wanted a two-bedroom property and they just don’t exist in Beaconsfield, where there are more flats.

“I had a dog when I was moving as well, so I needed a garden.

“The choice of two-bedroom properties in Henley was vast compared with Beaconsfield and I think that was really what made me look in this area.

“I was lucky enough to find Flint Cottage on the day that I got an offer on my property in Seer Green, so I jumped at it. I had looked at a few others, but I fell in love. In fact everyone who visits, whether they’re tradesmen or the postman or friends that come and visit, they all say that it’s unique.

“People don’t realise it’s here because it’s a little hidden gem, really. We’re sort of diagonally opposite the Row Barge pub, but Flint Cottage is down what they call an easement, which is basically a footpath.

“It’s only a few yards and the cottage is down the end, so we hear absolutely no traffic from here. We certainly don’t hear the Row Barge.

“It’s amazing, you’d never believe you were in the middle of Henley. It feels very safe as well.

“I met the previous owners and they were saying that in West Street, because you’re on foot most of the time — we don’t get the car out apart from when we’re playing golf — you meet so many more people.

“West Street is a lovely street to get to know people, really. It’s very neighbourly.”

Having the shops on the doorstep also comes in handy.

Helen said: “We get a Waitrose delivery once a week for heavier items, but other than that I literally just pop down the road — not quite every day but sometimes if I’m cooking something and I haven’t got an ingredient, it’s no problem.”

Flint Cottage doesn’t come with a garage, but Helen and Ian currently rent one close by for £98 a month.

The house dates back to the mid-19th century and has a garden that wraps around the property, with both a lawned area and a patio garden ideal for dining and a brick and flint wall and outside lights.

Helen said: “We’ve got a door going out from our kitchen-diner on to the patio area and one from our lounge, so it flows well.

“We tend to do most of our entertaining in the summer months outside. We can seat up to about 14 people.

“I just came across a photo from last year when we were having a gathering and we had to set the gazebo up because the weather looked a bit dodgy.

“With the gazebo up and the table laid for 14 people it looked really quite something.”

When Helen first moved into Flint Cottage four years ago she redecorated the whole house.

She said: “I also added a downstairs cloakroom, which is really useful, and a log burner. There was an open fire here but I decided a log burner was the way forward.”

Once past the entrance hall and the cloakroom, the ground floor of Flint Cottage is divided between the sitting room and the kitchen-breakfast room.

Helen said: “The other nice thing about it, I always think, is that you can’t tell where the stairs are. There’s actually a door to the stairs.”

Upstairs are two double bedrooms with built-in wardrobes and a family bathroom.

Having embarked on a search for a house with more bedrooms, Helen now has an even keener appreciation of Flint Cottage’s virtues.

She said: “We’ve been looking at a few houses. We haven’t found anywhere we like yet but some of the kitchens have got less cupboard and worktop space than we seem to have. The kitchen works very well and I wouldn’t want to change it. Even if I could change it, I wouldn’t.”

It’s a similar story when it comes to the bedroom accommodation.

“We’ve been looking at houses with no built-in wardrobes and you can’t even get a wardrobe in a room,” said Helen. “So, yes, we came back to our house thinking, ‘My gosh, our storage is far superior to some of the houses we’ve been looking at.’ ”

The rented garage offers extra storage space but in addition to its cupboard space and built-in wardrobes, Flint Cottage has a garden shed and a loft space, with the latter currently being used for Christmas decorations.

Having recently become grandparents, Helen and Ian are prioritising being able to have family to stay.

“We’d very much like to stay in the town centre but I think prices are going to dictate that we’re going to have to move a little bit further out,” said Helen.

Flint Cottage is on the market freehold, with offers invited in excess of £700,000.