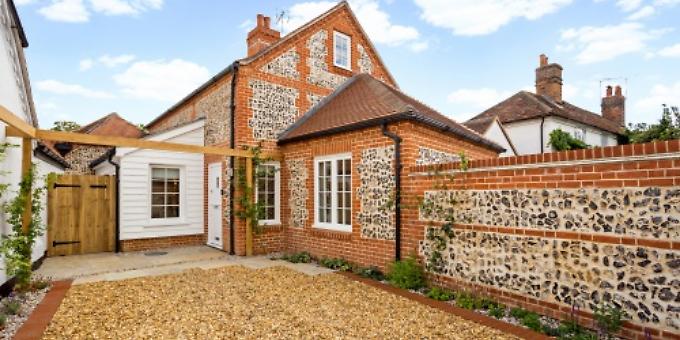 A NEWLY built brick and flint house with a cottage feel is on the market in Peppard Common.

The Lodge, off Church Lane, has been developed by property designer Damien Birtwistle and former estate agent Chris Kelly.

Their company, Light Space Land, of Clapham, acquired the land three years ago.

Damien said: “We bought the site with planning consent on it.

“It was going to go to auction through Savills but the company that we bought it from, which was a small independent firm, had been instructed to try to sell it before the auction.

“There happened to be a company that deals with development properties that I know. I saw it and it seemed like a good property to get my hands dirty with.”

With the site being located in a conservation area and within the Chilterns Area of Outstanding Natural Beauty, Damien was concerned to ensure that any changes made would be consistent with the surroundings.

He said: “One has to be rather careful about what one does and as a developer you don’t want to be fighting the planners all the time if you can possibly avoid it.

“The idea is to do something which is in keeping with the neighbourhood but to also give people what they want.

“Generally people like the charm of the brick and flint effect on the outside but they want something which is contemporary on the inside and that’s what we’ve provided them with.”

When Light Space Land acquired the site, it was home to just a small brick and flint shed.

Damien said: “The front part was just a single floor and had until recently been used for storage.

“It was fairly dilapidated, so we knocked it down and rebuilt it over two storeys, obviously with planning consent.”

Seen from the road, The Lodge is unobtrusive, but once through the front door it unfolds in a surprising way.

Damien said: “If you look at it from the kerb it looks like a small two-bedroom cottage, but it’s a real Tardis once you get inside.

“It opens up and the whole idea is that the rooms interconnect and give you the sensation of space and light.

“The name of our company is Light Space and that’s very much part and parcel of what I try to put into the designs.”

With parking at the front for two cars, the entrance hall opens on to the sitting room, which has an open fireplace with an oak mantel and bifold doors opening on to the garden. Adjoining the sitting room is a double-height dining area with a vaulted ceiling and roof light.

At this point, the property divides.

Damien explained: “What we did was to dig down half a level to achieve a long addition at the rear.

“The planning consent when we bought it was for just a single floor at the rear. By digging down half a floor at the back we created effectively a mezzanine floor above it.”

Stairs from the dining area lead down to the kitchen on the lower ground floor, which features an island unit and bespoke cabinets with integrated appliances and worktops in quartz and oak. There is also a larder and a utility area with a drying room.

From the kitchen, French doors open on to a sunken garden terrace that is ideal for outdoor dining.

Damien said: “If somebody really wanted to put an awning out there or something similar, it would become an outside room.

“But because it’s south-facing the whole of that side of the house becomes a fantastic sort of barbecue-cum-before-dinner drinks area where you can sit down and just enjoy it.” Back in the dining room, a staircase leads up to the mezzanine floor, where two of The Lodge’s four bedrooms are situated.

The first of these, which has the option of being used as a study, has bifold oak doors that open over the dining area.

Next door is a bathroom and a larger bedroom with views over the garden.

Meanwhile, the Lodge’s principal bedroom suite is located upstairs from the entrance hall at the front of the property.

This comes with a bespoke walk-in wardrobe in oak and a spacious en suite bathroom with twin sinks, a partially sunken bath and a separate walk-in shower.

Downstairs, also off the entrance hall, is the fourth bedroom.

With bespoke fitted wardrobes and an en suite shower, this could potentially be used as a guest suite.

Damien said: “One of the features a number of people have commented on is that effectively you’ve got two first floors.

“You’ve got a first floor at the front and a first floor at the back, separated by that dining area, which means that you can separate off people who may be staying or they may be family or whatever and not have to worry about them, which is actually quite an attraction to a substantial number of people.

“The way the double-height dining room interconnects with the living room and also with the half-height mezzanine which looks down over it — and with doors that open out on to the garden as well, from both areas — makes this a fantastic place for entertaining.”

An interior designer by training, Damie is proud of the level of finish.

He said: “Certainly in terms of the carpentry and all the fittings, it really is exemplary.

“But what I don’t do is put expensive fittings into the property — I think you can get the wow factor just by applying some good design rather than by fitting £500 taps and suchlike.”

A 360-degree virtual viewing of the property is available online at https://my.matterport.com/
show/?m=LZwVd1Kzxok

For more information and to arrange a traditional viewing, call Matt Davies at Knight Frank Henley on (01491) 844903.