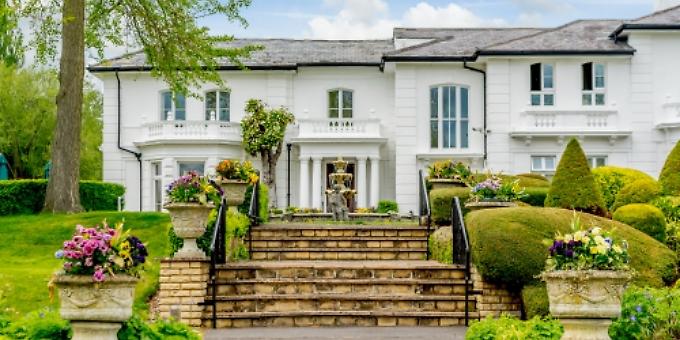 A ONE-BEDROOM first floor flat at Henley’s Thamesfield Retirement Village is on the market with Knight Frank estate agents.

Until January, it was home to Briant Holland, a former RAF test pilot who served all over the world.

One tour of duty was spent at the United States Naval Test Pilot School in Maryland, where he trained with NASA astronaut Buzz Aldrin.

He then returned to the UK to help test the P1127, which was later known as the Harrier Jump Jet once in service with the RAF.

Mr Holland was also part of the team that developed head-up displays for aircraft, a technology now commonplace in cars.

His son Quentin said: “My father was a test pilot in the RAF for all his career, which one thinks of as an exciting job.

“Of course, he wasn’t an exciting and dangerous man, he was a very careful man. That’s why he was still alive.

“He flew things like Harriers and Concordes and Vulcans and all sorts of exciting stuff. He was a rather cool dad to have.

“My mother, Diana, was Chilean. They met in Cherbourg. They both sailed into port at the same time and rather spotted each other.”

After marrying, the couple went on to have four sons, Quentin and his brothers Nicholas, Toby and Ben.

“Dad forged a career around the world as a test pilot and a fast jet pilot,” said Quentin. “I lived in 18 different houses growing up — from Hong Kong to Cyprus to America to Malaysia to Singapore to everywhere.

“Very sadly, upon retirement, my mother got Alzheimer’s, so Dad spent 13 years looking after her, which was not the retirement that we or anyone had planned for him.

“And the moment my mum died he decided to sell that house.

“He said, ‘Look, I don’t want to live here. You know, your mother was my life. I’m going to sell it and I’m going to enjoy life.’

“So he went and sold the house, he bought a Bentley and he moved to Thamesfield.

“He spent his life travelling — he went to Vegas, he went back to all the places we’d been posted — and Thamesfield was a really remarkable base for that because it gives you this sort of concierge-type lifestyle whereby you have a kitchen in your flat but nobody uses it. Everyone either has food delivered or goes and eats in the restaurant.

“It’s a gorgeous building, it really is, and the gardens are spectacularly beautiful. They have a croquet pitch 30 metres back from the river but then the rest of it is turned over to pretty flower gardens and a perambulation area for the residents.”

Mr Holland was 85 when he died in January.

Quentin said: “During his dotage, for want of a better word, Dad had taken to travelling somewhere warm for January and February.

“He wanted to go to Penang in Malaysia this year but we couldn’t do that, for obvious reasons, and there were massive restrictions on travel. But on December 2 last year we came out of restrictions and I booked a flight with Dad to Tenerife. He stayed in a lovely hotel on the seaside and my girlfriend and I stayed in a flat 500 metres up the coast in a little fishing village.

“Very sadly, my father passed away while we were there. But it did mean that he got to spend his last winter in the warm.”

Quentin said that as a regular churchgoer his father had enjoyed attending services at St Nicholas Church in Remenham.

Having grown up in Whitchurch Hill, he was also devoted to the sport of rowing.

“He rowed for Cambridge in his day and loved going to the Henley Royal Regatta,” said Quentin. “He went every single year no matter where he was in the world.”

As a town, Mr Holland found that Henley had a lot to offer.

“It has so many nice little restaurants to go to,” said Quentin. “The walk across the bridge and lunch with your grandchildren or great-grandchildren is a lovely thing for an older person to do.

“There’s Phyllis Court Club and, of course, he used to go to the Picturehouse as well.

“Henley is about as nice as England gets, isn’t it? It’s comfortable, it’s quiet, it’s peaceful and it’s got good restaurants.”

With 34 apartments in total, the retirement village offers hotel-style living on the banks of the River Thames.

Number 24 has an entrance hall, cloakroom and a spacious sitting room with large doors opening out on to a Juliet balcony with views over the grounds and access to the kitchen, which has fully fitted units.

The double bedroom comes with an en suite bathroom with a large walk-in shower and the apartment has its own parking space.

As well as the communal gardens, residents benefit from exclusive facilities including the restaurant, conservatory and sitting room.

There is a full programme of social activities plus hairdressing facilities and a treatment room.