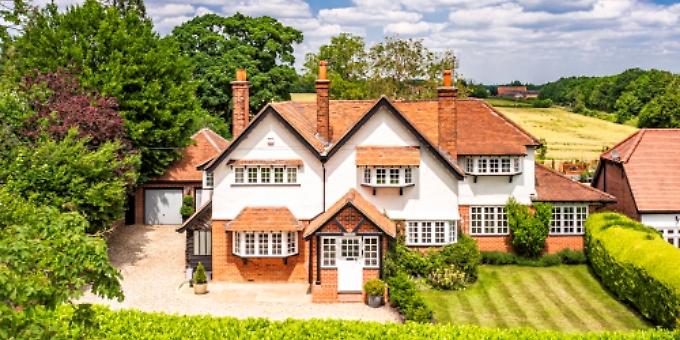 A FIVE-BEDROOM family home with three bathrooms and six reception rooms is on the market in Streatley.

Built in 1902 in the Arts and Crafts style, Dunvegan House in Townsend Road has been home to Ian and Sue Liddicoat for 20 years.

“We’ve brought our four children up here,” says Sue. “They’ve all finished university and they’re all going off to do their various things.

“So it has been a wonderful house, but for us now it’s time to downsize a little bit and for something new.

“My husband had his career in London but he’s now semi-retired so no longer needs the commute and we’d rather go and live somewhere near the sea. We’re looking at Devon at the moment.”

With Ian being descended from the Clan MacLeod, the Liddicoats also have links to Scotland.

Dunvegan House is named after Dunvegan Castle on the Isle of Skye, which is the family seat of the MacLeods.

Sue says: “My husband’s family are the only Scottish family still to have their castle. It’s very beautiful there and I suppose we felt that the hills and the countryside at Streatley reflected the beauty of the Isle of Skye.”

Backing on to open farmland, Dunvegan House enjoys an elevated setting but is still only 15 minutes’ walk from Goring station.

“That’s downhill,” laughs Sue. “It’s harder on the way back. And my husband does walk very fast.

“We’ve got all the facilities of the village, the convenience of the train line for London, and yet you look out of the kitchen window and you’re looking across rolling fields with hills in the distance and it’s very tranquil and beautiful.

“You do feel as though you’re right out in the country but you’ve got the convenience of civilisation on the doorstep, if you like.”

A door from the utility room adjoining the kitchen opens on to the extensive garden terrace, which is ideal for outdoor dining and entertaining.

“There have been a number of parties across the years of all the ages we’ve had,” says Sue.

“When the kids were younger we had all the children’s parties with all sorts of climbing equipment in the garden and trampolines and swing sets — it was like living in a park for the children.

“And then we’ve moved on from that and we’ve had the teenage parties and family parties — lots of families all getting together. It’s a very sociable village and we’ve had loads of friends bringing up their children in the village as well.

“Our garden used to be a popular choice at the end of the regatta. Everyone would walk back from the river because it’s really not very far to the river from our garden.

“We used to have one of those big above-ground pools in the garden and all the kids would come back and jump in — and we’d put the barbecue on and basically carry on until the next morning.

“Sadly, the regatta has been scuppered by covid the last couple of years but hopefully it will return one day.”

Set in just over half an acre, Dunvegan House’s mature gardens wrap around three sides of the property. And being situated relatively high up means that there is plenty of natural light flooding into the house.

Sue says: “If you live in Streatley, one of the problems you have is that because of the enormous hill a lot of the properties lose the light at certain times of the year.

“Most properties lose it sort of mid-afternoon but because we’re a little further away from the hill, the sun comes around and we have beautiful sunsets — it sets over the fields behind the garden.

“So we never lose the sunshine until it dips out of the sky.”

When the Liddicoats first moved to the house 20 years ago, a detached double garage had just been added by the previous owner.

This replaced what had previously been an integral double garage on the right hand side of the property, as viewed from the road.

This has now become a breakfast room off the kitchen and a dining room that leads through to what is now the drawing room at the rear, with a set of French doors opening on to the garden.

Upstairs are five double bedrooms and a family bathroom, with the master bedroom having its own en suite shower room.

Sue says: “We didn’t have to do anything structural when we moved in but everything inside really needed a little bit of loving up, shall we say?

“Part of the extension was done in the Seventies and it needed making more tasteful, so we did a lot of new windows, changed doorways and moved internal walls.” One innovation on Sue’s part was the addition of an Art Deco-style cocktail bar to the drawing room, which was added to the property in the Seventies as part of what was then a two-storey granny flat extension.

Sue says: “There’s a pillar which is holding up the back of the house and which you obviously can’t take down because it’s structural.

“Previously, when it was an annexe, it had this really bad kitchen in there. So we stripped it out and I just changed the layout of it. That came to me in my sleep, actually: ‘I think we’ll build a bar.’

“When we bought the house we used to have parties in the drawing room because it was just a great big empty room. It was a bit of a disco room, I suppose, and I think that was probably why we put the bar in there.”

While the Liddicoats have configured Dunvegan House as their family home, Sue says it would be very easy to turn that wing of the property back into an annexe if required.

On the other side of the kitchen is the snug, whichis one of the main hubs of the home.

“And in fact it’s amazing — everyone congregates there. You will always find someone sat on that sofa and if there are people meeting up at our place to go off somewhere, everyone comes and stands in that room — it’s the heart of the home, I think.”

The kitchen, which was designed and installed by Caversham firm Griggs & Mackay, also opens on to the sitting room, which in turn leads through to the family room/study also known as the Red Room at the front of the property.

“The kitchen area is quite open-plan but the rest of it is quite zoned,” says Sue.

“So you’ve got the best of both worlds, really, because you’ve got that lovely open plan family space in the middle where you can cook and everyone chats and so on.

“Then when you need to take yourself off to work or do homework or study there are plenty of other places where you can go to concentrate.”

Sue suggests that were a professional couple who both wanted to work from home to buy the house, they might want to think about converting part of the double garage into an office.

“The garage is an extra large garage, so where the up and over door bit finishes, there’s another section, probably at least half as much space again, which has a side door from the garden.

“You could put a partition wall up there and it’s a very sound structure — you can see all the steel that’s in there and so on. The garage has got its own fuse box and it would be very easy to convert that into a separate office if you wanted to walk across the courtyard and into a separate building for work.

“The structure is all there already and it has got lots of power sockets. It has got windows that look down over the garden — it would make quite a nice space.

That said, my husband likes to work in the kitchen.”

Dunvegan House is on the market with Warmingham estate agents in High Street, Goring, at a guide price of £2,445,000.