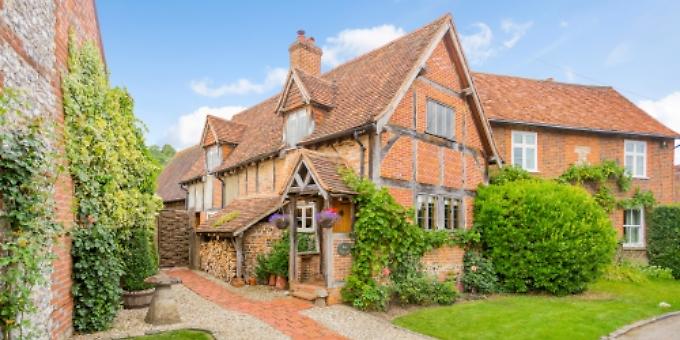 A LATE 17th century cottage that used to be the village bakery is on the market in Turville.

Grade II listed Rose Cottage, which enjoys views of the Cobstone Windmill that featured in Chitty Chitty Bang Bang, has been home to Tim Ireland for the past 11 years.

Having spent the bulk of his career working in the oil industry, Tim retired in March last year, just as the first coronavirus lockdown was introduced.

He says: “I’d long planned to retire at the end of March — the end of the financial year — and the two coincided.”

Tim, who previously lived in Oxford, moved to Turville in order to enjoy the benefits of country living while at the same time having a shorter commute into London.

He says: “I always used High Wycombe. It’s a 20-minute drive from here and of course the train service is very good because you’re on the main Chiltern line.

“I tried the Marlow route as well but there’s two trains an hour whereas at High Wycombe in the rush hour in the morning there’s a train every 10 to 15 minutes.

“It’s half an hour into Marylebone and I could be at my desk in central London in an hour and a quarter, door to door.”

After opting to stay put during the pandemic, Tim now plans to move to live in Devon.

He says: “I’m completing my plans for retirement — I just bought a place down in Devon and I’m going to live by the coast, near Dartmouth. I’m not married, my kids have grown up and left home, so retirement down to Devon was always part of the plan. I’m told I need to provide a holiday home for my granddaughters.”

Tim is a keen dog walker but is hoping to have more time for his other hobbies in retirement.

“I’ve surfed in the past,” he says. “I must admit I don’t do as much of it now but I will definitely get back into my surfing because I’ll be by the sea.

“I dive as well — I’m a very keen scuba diver. Most of my diving is done in warmer water but the south coast is very popular for scuba diving and fishing, so I will definitely be having a boat in Dartmouth and getting out fishing.”

Tim’s love of the outdoors extends to being able to entertain friends and family in the garden at Rose Cottage, where there is a flagstone terrace at the rear of the property and a separate sun deck higher up the garden.

He says: “Immediately out the back there is a patio area with the bench and the fire pit, so late in the evening we often sit down by the back of the house. But lunch tends to be up at the top of the garden.

One part of the property that stays cool all year round is the cellar, which Tim uses to store his wine collection.

He says: “I developed a love of wine 30 years ago, I guess, so having a house with a cellar was a real bonus, because you can store all your wine down there and keep it cool. Some men have man caves, I have a cellar.

“The great advantage of it being underground is that it’s self-regulating, so it stays within about a five-degree range throughout the year, from the hottest to the coldest temperature, so you save on having to basically air-condition the place — you can just leave it all down there.”

Before Tim moved in, the property had been extended by one of the previous owners, creating what is now the dining room with a spiral wrought iron staircase leading up to the mezzanine-style principal bedroom suite.

“While I’ve been here I’ve redone the bathrooms and changed all the external doors on the property because they were getting very old and tired. I had the cellar lined in concrete — they call it tanked — and put all the wine racking in there.”

The wine cellar can currently hold a total of 864 bottles and the racks that Tim installed are available by separate negotiation.

Two open brick fireplaces with original brick and flint oven projections and a covered well in the dining room testify to the property’s history.

“The old cottage was originally two cottages, both of which were one up, one down,” says Tim.

“It had been the village bakery, hence the bread ovens. There’s two big bread ovens, one in each of the two cottages, as it were, front and back.

“The cottage has also been the post office, so there is a small window in the front wall, which is where the letterbox used to be when it was the post office. But yes, its main history is as the village bakery.”

The addition of the rear extension 20 years ago means that there is an element of separation in the way that Rose Cottage is now configured.

Downstairs, the front door opens on to the sitting room, which leads through to the country-style kitchen and then the dining room.

The main staircase leads up from the sitting room to the first floor, where there are two double bedrooms and a family bathroom with a free-standing bathtub.

Access to the principal bedroom, which has an en suite shower room, is only via the spiral staircase from the dining room.

Tim says: “My son lived here with me for three or four years in his twenties, when he was working in Oxford and before he went out to Australia.

“That makes it sound like we didn’t want to integrate at all. But yeah, it gave a little bit of separation and a bit of privacy. It actually worked perfectly.”

As well as the cellar offering plenty of storage space, there is also loft access from one of the bedrooms.

“Part of the ceiling in the third bedroom and above the bathroom is boarded,” says Tim. “There is also storage under the stairs going down to the cellar.

“It would be criminal to put anything other than wine in there in my mind but, you know, not everyone would agree with me of course.”