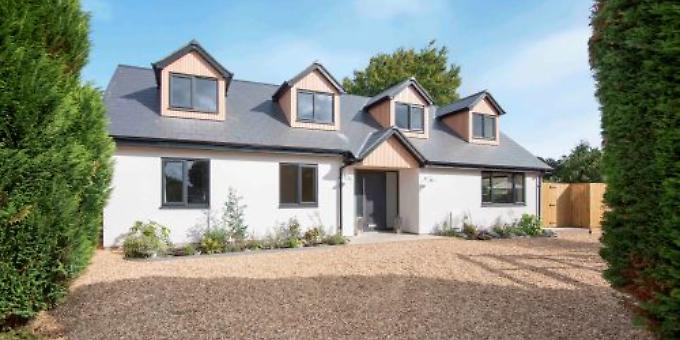 A HOUSE that has been transformed from a bungalow into a two-storey home with five bedrooms is on the market.

The new-look number 23 Makins Road, Henley, is the creation of property developer and construction project manager Gemma May-Brown, who has worked with Soho House and the Candy brothers during her 18 years in the industry.

Gemma, who lives in Thame, says: “When we saw the bungalow we just thought it was an amazing opportunity — a great corner plot with so much potential to transform into something really special.

“I love buying bungalows because the right bungalows on the right plots are just fantastic opportunities. We have purchased other bungalows in the past and turned them around, similar to this.”

Number 23 as it now stands was not built wholly from scratch and so counts as a redevelopment of the site rather than a new development.

Gemma says: “The property was an existing bungalow, so technically the works that we’ve done are classed as an extension, which is a bit silly really because there were only two walls left standing.

“The whole thing’s really been taken apart and then a huge amount of steel has gone in to form the bones of the new house.”

Work on the build started at the end of March and the house, which totals 2,966 sq ft, is now ready for in-person viewings.

Gemma says: “We started just as spring was coming in to make it a little bit easier because there was a lot of external work. And it’s taken us about five to six months to complete with dressing and finishing inside.”

At the front of the property there is a large gravel driveway with a high hedge surround, together with a covered parking area and a lockable store.

There is space to park four cars, while the carport includes an electric charging point.

“There’s power back there for if you wanted to have your electric car, so it’s got its own little distribution board,” says Gemma. “We tried to think ahead for people in the future that they would want to be charging a car in the carport and not having to have a cable trailing through the house.”

A similar design philosophy applies inside the property, where the rack housing audio-visual equipment for home media is fitted in one of the two walk-in eaves storage spaces on the first floor.

Gemma says: “The whole house is cabled back to an AV rack to enable you to be able to pop all your Sky boxes or whatever you’ve got up there and out of the way so that you can just have a TV on the wall. It’s really nice and clean without lots of cables everywhere.”

The eaves storage spaces sit on either side of the family bathroom, which has a free-standing bath, separate shower and a marble-topped vanity unit.

Off the same first-floor landing are four double bedrooms, including the principal bedroom, which has an en suite bathroom similar to the family bathroom, plus ample room for a dressing area.

Downstairs there is a further double bedroom with a large en suite shower room. This sits just off the entrance hall at the front of the property, where there is also a study and an individually designed WC, next door to which is a spacious sitting room with wood-panelled walls, a multi-fuel burner and bi-fold doors opening on to the garden.

On the other side of the entrance hall is an open-plan and multi-purpose kitchen/dining/
living space.

The kitchen is a balance of classic and contemporary design, with a dark green island and units topped with marble and a range of integrated appliances.

A set of aluminium-framed
bi-fold doors open on to the outside and there is a separate utility room just off the kitchen.

The house has been designed to Gemma’s brief by Paul Morgan, of Morgan Architectural Designs, in Princes Risborough.

Gemma says: “We worked very collaboratively with them and we’ve always got a vision of what we want to achieve.

“We really wanted a ground-floor bedroom and a study and a utility room to make sure there was space for people to work at home and also perhaps to have elderly relatives or
co-dependents staying.

“I think flexibility is king for everybody at the moment, isn’t it?”

The original bungalow on the site dated from the early Sixties, a time when garden plots were typically much larger than today.

Gemma says: “I think that’s one of the compromises with buying a new property, that developers are obviously tight on space.

“For families you do want a bigger garden and it’s really difficult trying to buy a new house because you just don’t get the space, unfortunately.”

With an outside plot that wraps around the house, the gardens at number 23 have been laid out to create two distinct zones.

At the side of the property, an entertaining/dining terrace leads directly off the kitchen/dining/
living area, while at the rear there is a “family” garden with a smartly finished expanse of lawn, a patio/deck with contemporary water feature and a mix of well-stocked and attractive beds and borders.

Gemma says: “At the side we’ve got a limestone and larch deck — I call it an adults’ entertaining area.

“It would be perfect for a big outdoor kitchen and some space to sit and relax.

“I’d call it more of an adult space, with the kids probably taking over the lawn at the back.

“You’ve got these different zones that flow quite nicely off the kitchen, which is really lovely.

“The garden was designed by Sarah Naybour, who is a Chelsea Flower Show award-winner, and she was just absolutely fantastic, such a find. We loved working with her.

“We always wanted to do something special with the garden. We met quite a few landscape designers and when we met Sarah we really felt that she perfectly understood what we wanted to capture. The design that she put forward was just absolutely perfect, so we’ve been really happy with what she has done.

“There’s lots of soft, wide curves, which is quite unusual — so no kind of square, boring borders.

“There’s lots of waves and shapes and we’ve planted some new trees and the shapes lead your eyes into certain corners of the garden that you wouldn’t necessarily look at otherwise.

“We’ve made a little coffee terrace for the water feature, which is a really nice spot, and there’s space for dining and sitting and the big lawn for kids as well.”

Given the current popularity of working from home, Gemma says that at one point she considered installing a stand-alone home office in the garden.

“There is actually quite a lot of space at the bottom of the garden,” she says. “The only reason we didn’t was because the floor plan of the house has so much space, but there’s certainly the potential to put quite a large office at the back of the garden if somebody wanted to — or even at the front because the driveway is huge. There’s definitely plenty of space.”

Gemma says the option of installing a large garden office could in turn enable the downstairs study to be turned into a TV room or similar.

“If you had an older relative staying with you on a permanent basis then perhaps you might want to change the study into a little TV room for them so they’ve got their own space and then you could put a big study outside.

“When we were developing the property we thought it would be quite a lot of extra money to do it and you’re trying to anticipate personal circumstances at that point.

“But what we’ve done is we’ve got the space, we’ve got the power out there and it’s all ready to go, so hopefully it would be really easy for somebody.”

The house has been furnished to help prospective buyers visualise themselves living in the property.

Gemma says: “We’ve learned that even with a new house, people struggle to fully appreciate the space when it’s not dressed, so we always dress properties now because it shows them off to their best potential.