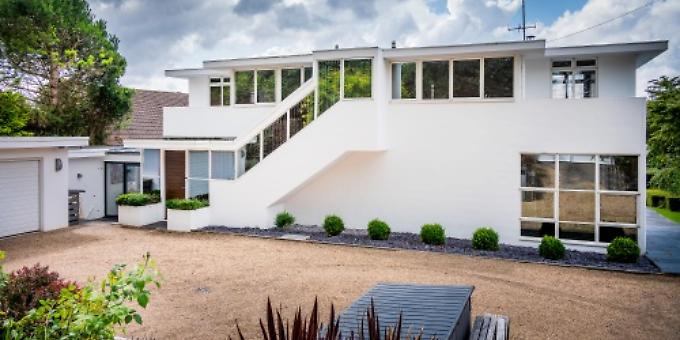 A PIONEERING modernist house that won a design award after being restored by its present owners is on the market in Little Frieth.

Flat Roofed House has been home to Chris and Sue Munro for more than 20 years.

But after buying the Grade II listed property, they rented another house in the village while refurbishment works were carried out by Dennis Sharp Architects over a two-year period.

A film industry veteran, Chris is a production sound mixer who won Oscars for his work on Black Hawk Down (2001) and Gravity (2014).

Flat Roofed House had previous links to the entertainment world, having been home to the actress Phillada.

Chris says: “We bought the house in 1998 and it was in a more or less derelict state. It was built in 1934 for a portrait artist of the day called Margaret Sewell.

“Her husband was a war artist in the First World War and was killed, leaving her with a young daughter, Phillada Sewell.

“They used to travel yearly to the war graves and every time they went they went further and further afield and they started to see these modernist houses, mainly in France.

“Nothing like this existed in the UK and because Margaret was an artist she actually made a model of what she wanted her house to be.

“She contacted an architect called Colin Lucas who had already shown some interest in this type of work. She showed him her model and basically he made her the house.

“This house was a very early commission for Colin Lucas and that’s why it’s a Grade II listed house and considered architecturally significant.”

Following Margaret’s death, the ownership of the house passed to her daughter. “She lived in the house for the rest of her life,” says Chris.

“Phillada was a well-known character in the area. She was an actress and she’s in a lot of films.

“She died, I believe, aged 90. Then after her death the house sat vacant for a couple of years because there were a number of conditions on selling it.

“One of them was that Phillada insisted that the house was written up in an architectural magazine, but basically we bought it in a fairly rundown state and completely refurbished it.”

Chris says he and Sue were drawn to Flat Roofed House by a combination of factors.

“First off, it has the most incredible views, so it was the position that sold us on the house. It was listed and we knew there was a lot to do to it, but the position just made it all worth it.

“And by getting involved with the refurbishment, my wife and I both became very interested in modernism and that period of architecture.”

Architecturally, one of the property’s most striking features is the staircase.

Cantilevered from the main house, this leads up from the reception hall to the first floor.

“It’s a very clever use of the space because you know how much space a staircase takes up within a house,” says Chris.

“The house has a really nice flow to it. Modernism was quite an interesting thing because it was really about the start of living without servants.

“The reason why there were no cornices or fancy bits is because there were no staff to clean them. Modernism was very much a way of life.”

Despite its listed status, Chris and Sue have been able to make a number of additions to Flat Roofed House during their time at the property.

These include a garage block, a downstairs shower room, a utility room, a walk-in pantry and a breakfast room. “We were able to add all that on and it’s separated from the main house by a glass structure,” says Chris.

Other additions include substantial improvements to the property’s insulation, which contributed to the awarding of the design prize, and a pair of electronically controlled gates that open on to the gravelled parking area at the front of the property, with space for up to eight cars. There is also an electric vehicle charging station.

Inside, the ground floor is dominated by the living room, with full-height glazed doors opening on to the garden terrace.

This enjoys uninterrupted views of the surrounding countryside extending to the Chiltern hills in the distance.

The living room is flanked by the kitchen and the dining room, with the latter also providing a useful space for working from home.

“The dining room is a particularly nice space,” says Chris. “We have our desks in there and it kind of doubles up a bit as a study. But also, because we have a downstairs shower room, it could even be another bedroom if anybody wanted it.”

Upstairs are two spacious bedroom suites and a family bathroom.

Both bedrooms have their own dressing room and access to balconies at the front and rear of the property, with the principal bedroom also having an en suite shower room.

“The house is not just a house, it’s very much a lifestyle,” says Chris. “It has that amazing garden and great views, so especially in the summer it’s fantastic for garden parties and a great weekend place for having friends come to stay.

“Funnily enough, when we first moved there my wife always said, ‘I just feel like I’m on holiday all the time.’”

However, after 20 years at Flat Roofed House, the couple are now ready to move on and are eyeing a move to Henley town centre.

“Frieth is a fantastic place, it has a great community and it’s a really nice village, but it isn’t like living in a town centre. If you want to go out for a loaf of bread you have to get in your car.

“We really enjoyed that way of life, of living in the country in a rural area which is actually so close to London.

“It’s probably the closest you could be to London and still have that rural feel. But we now feel we want to move to Henley.”