Cosy up in listed former inn with period features 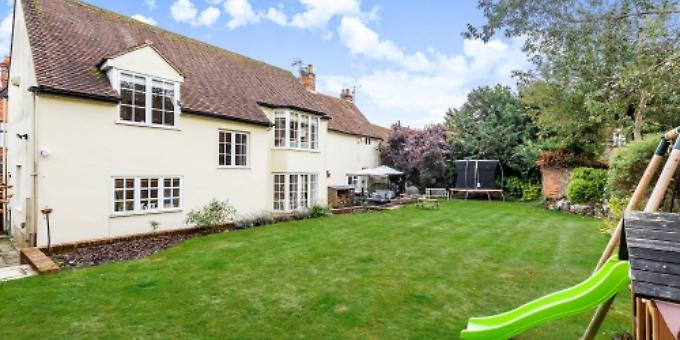 A COUPLE are selling their Henley home so they can give their children more space to grow.

Will and Veronika Laithwaite bought Old Ship House in Wharfe Lane in 2012 knowing it was the perfect location to start a family.

They knew this because they had moved from another property in the same street in search of a big enough garden to have a dog.

Two months after getting the keys, the couple welcomed Hector, a Bernese mountain dog.

Thought to date back to the 16th century, Old Ship House is a five-bedroom Grade II listed property and was once an inn.

Mr Laithwaite, who is on the board of Laithwaites Wine and runs his own brewery, said: “It is like three buildings in one. The oldest part of the building was a pub when Wharfe Lane was a working wharf.

“The old building has been added to over the years. The newest bit was built in the Eighties and is a bit more modern in style but it does fit well with the rest of the house, it is complementary.

“It has got so much character and that was what attracted us to it. There are lots of exposed beams and an exposed fireplace — we really could picture ourselves by the fire on a cold winter’s night with a glass of wine in hand.

“It does have that old-fashioned pub feel with roaring fires and it even has a cellar.”

A small lobby is at the entrance where there is a place to store coats and shoes and glazed double doors lead to the reception hall, which is used as a sitting room. It has an open fireplace, vaulted ceiling and double French doors to a patio.

The room is double aspect, a feature that is replicated throughout the majority of the rooms, creating light and space.

Next door is an open plan kitchen, which was fitted last year and has under-floor heating and a dining area. There is also an island with space for bar seating and a bay window and French doors to the garden.

Mr Laithwaite said: “When we moved in we did quite a bit of work. We had all new carpets and renovated the main bathroom and gave everything a lick of paint. A lot of it was cosmetic stuff to freshen it up.”

Mr and Mrs Laithwaite have two children, Marcus, one, and Josie, three, who attends Treetops nursery in Henley. The family spend most of their time in the kitchen.

Mr Laithwaite said: “The kitchen was satisfactory when we moved in but it was quite old and was suffering from wear and tear. It had a bar area jutting out, rather than an island, and had probably been installed in the Eighties.

“We wanted to have something that was light to make the most of the windows that are there and when we replaced it a year ago it felt like the whole place had been renewed.

“We also put in under-floor heating with wood-effect tiles on top so it is really easy to keep clean. It is really nice to come downstairs in winter and keep your toes warm.

“It is also next to the playroom so we can make sure that the kids stay out of trouble and we can see out of the big bay window and see what they are doing if they are in the garden.

“The other side of the kitchen is a large hallway which we use as a sitting room. There is a sofa and one of the old fireplaces for if we want to have somewhere that is more comfortable to spend time with the kids.”

Beyond the reception hall, the house reveals its character with exposed beams, painted brick walls and wooden panel doors throughout.

A more formal living room is reached at the end of the hallway with exposed wall timbers. It is spacious, has multiple aspects and exposed beams in the walls and ceiling.

Up a short flight of stairs is the fourth and final reception room, currently used as a study and fitted with a wall of shelving. The property also has a fitted wine cellar and storage area on the lower ground floor.

Mr Laithwaite said: “There are plenty of options for doing things a bit differently from how we have done them. I would say the living room is my favourite part of the house because of its old style.

“The walls are also very thick. I don’t do very well in summer and when it is warm the room stays very cool while in winter it retains the heat of the fireplace so it is very cosy and it is also very quiet.

“We used to do a lot of entertaining pre-covid so the living room was a dining room as well, although a lot of our friends have kids too so no one has really got back into the habit of meeting up yet but it can easily be turned back into that.”

The five bedrooms are spread between two “wings” on the first floor. The southern wing has a family bathroom, fitted with a bath and shower attachment.

Further up the staircase there is a guest bedroom which has six windows, giving east and west views. There are also exposed wall and ceiling beams.

Two more double bedrooms are further up the stairs, which again enjoy multiple windows with river views, exposed painted brickwork and built-in shelving. One of these provides a connecting door to the principal bedroom which has its main access from the north staircase. This room has built-in wardrobes and a seating area in front of a bay window overlooking the garden.

The fifth bedroom could be used as a dressing room as it has a wall of built-in wardrobes.

Mr Laithwaite said: “The master bedroom is in the newer part of the house and is quite big and has a bay window so it is nice and light. The rooms have tonnes of character, especially in the older part of the house with big beams and the middle part has a vaulted ceiling.”

In the cellar there is also a stable door which opens out to a west-facing walled garden, which can also be accessed by a side gate.

There is a patio that runs the length of the house and a paved seating area with bench seating built around a pizza oven. There are steps up to a level lawn area, which includes mature flowerbeds, trees and a storage shed.

At one end, the garden has a formal raised vegetable area beneath a pergola that offers additional patio for seating.

Mr Laithwaite said: “The walled garden has quite high walls so you can be tricked into thinking you are in the middle of the countryside rather than in the town centre.

“The large patio goes up to a lawn and we also have a ‘secret garden’ which we use for vegetables and we have some raised beds and an area to sit which captures the last of the sun in the evening. It is quite the sun trap.”

Mr Laithwaite said the house is in a perfect location for anyone with, or hoping to start, a family.

He said: “It has been great to start a family here because of the great location because it is so close to everything in town, everything is in walking distance.

“It is great for going out to restaurants or the Kenton Theatre or to a café. It is also great to meet other parents because you are really close to the park and cafés.

“Living close to the river is such a bonus and there has never been any issue with it and the children love to go and feed the ducks.

“The lane is a fantastic place to live because it has a village atmosphere where everyone knows each other and you can go out for a walk and end up chatting with a neighbour.

“There really was a sense of camaraderie during the lockdowns with people chatting through their windows. It is also really quiet, which might be surprising given it is just off New Street but the noise doesn’t travel.”

Mr Laithwaite grew up in Peppard and is looking to relocate his family there in pursuit of more space. It will be without Hector, who passed away at Christmas, but they have recently welcomed Hank, another Bernese mountain dog.

“The reason we are moving is a space thing,” said Mr Laithwaite. “We have been very fortunate to have lived here and it has a really decent size garden for a property in the centre of Henley. We are moving to Peppard, which is where I grew up, because we want to have more space for the kids for when they get older and start to run around more and making more mess.”

• Old Ship House is being sold through Davis Tate estate agents in Henley with a guide price of
£2.5 million. For more information and to book a viewing, call (01491) 412345.