Cottage could have garden office added 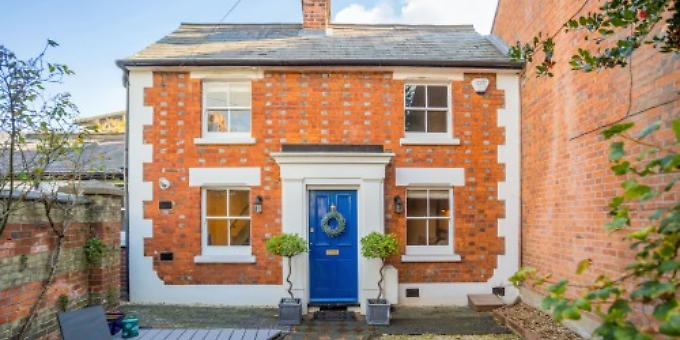 A DOUBLE-FRONTED two-bedroom Victorian cottage with the option of adding a garden office or studio is on the market in Greys Road, Henley.

Number 75 was originally built in 1885 and has been home to Louis Brown and Charlotte Hazell for the past three-and-a-half years.

The couple, who are in their early thirties, both work in the music industry and are currently preparing to move to Manchester, where Louis is the chief operating officer and general manager of talent and entertainment company NQ.

Louis said: “We were previously living in London, so this was our first property purchase. We wanted to buy somewhere outside London and we loved the area.

“I was familiar with Henley anyway as I went to university in High Wycombe and I came to Henley a couple of times while I was based there, so we decided to buy here as our first house.

“We’re now moving up the ladder, looking for more space, but also we’re having to relocate to Manchester for work purposes, so unfortunately we’re having to leave Henley altogether — but I’m sure we will be back at some point.”

Louis and Charlotte, who is a label manager for London-based Killing Moon Records, are glad they had moved out of the capital before the coronavirus pandemic struck last year.

Louis said: “Henley’s an amazing place and it was probably the best place for us to be, especially during lockdown.

“I couldn’t imagine living in London while all of that was going on, so it was a really great place to spend our time and if it wasn’t for having to relocate I think we would probably have stayed here.

“We were both able to work from home and I think the fact that Henley has got so much greenery around made it a lot easier.

“We’ve got a small dog, so being able to go out on nice walks and still keep socially distanced from everyone was great.

“I can only imagine that was very difficult in London with limited park space and very built-up areas.”

Situated a short walk from the town centre, number 75 is approached via a passageway leading to a full-height front gate that opens on to a courtyard garden.

Louis said: “Because Greys Road is quite busy it’s nice to have the house set away from the road because it means we can keep our original sash windows without having that immediate traffic noise.” The late Victorian property’s other character features include exposed beams and open fireplaces.

On the ground floor, the spacious sitting room has a wood-burning stove but the house also benefits from gas central heating.

Next door to the sitting room is a well-appointed kitchen-dining room with wall and base units and a contemporary family bathroom.

Stairs lead up from the kitchen to the first floor, where there are two double bedrooms.

During their time at number 75 the couple have made a few alterations while being keen to preserve the property’s original character.

Louis said: “We’ve redecorated to a higher modern standard. We’ve redone the flooring in the living room, so we’ve laid down real wood flooring as opposed to the previous carpet. We also changed the cabinets in the kitchen. It has been a lot of kind of furniture and interior work but there has not been any need for any structural work, which has been good.

“We’ve recently repainted all of the outside frontage, including the front door. It was all stuff that we were able to live in and do.”

Downstairs, the wood-burning stove in the sitting room was installed by the previous owners shortly before Louis and Charlotte moved in.

Upstairs, the fireplace in the master bedroom is more of a decorative feature.

Louis said: “Although it’s the original fireplace it’s not commissioned, so it’s more of a façade on top of it now. But if you were to knock through that it still runs through to the main chimney.

“The one in the main sitting room is a new log-burner unit, so that does wonders in terms of giving additional heating for the whole house, especially in winter.”

With two bedrooms at their disposal, the couple have used the second bedroom as more of a multipurpose space.

Louis said: “The master bedroom is extremely spacious with its original flooring and good-sized space for a wardrobe and storage.

“The spare bedroom is slightly smaller but you can still fit a double bed.

“We currently have a double sofa bed in there, which makes sense as it means we can pull it out for guests, but we can then tuck it away and use it as a home office, PlayStation room, additional storage space and for getting ready. As a multipurpose space it has been really good.”

The couple considered making a number of changes to the property that they ultimately opted against.

Louis said: “There is a loft and it’s fantastic for additional storage. You could potentially extend up.

“There’s probably a few things that you could do with this place but we decided not to because we wanted to keep the character of the house intact.

“We thought about whether or not we could extend out at the front, but we feel that the front of the house, the character, is what really sold it to us and we never wanted to do anything to ruin that, so to speak.

“We feel this house is kind of perfect as it is. It’s the perfect character cottage and we just think it’s absolutely ideal for couples or first-time buyers.”

One change the couple did not make but which they think may appeal to the next owners of number 75 would be to replace the large shed in the front corner of the courtyard garden with a home office or studio.

Louis said: “Especially if you’ve got two people working from home quite a lot, it would give everyone that additional bit of privacy to be able to be in their own space and do their own work.

“Again, you could multipurpose that — you could have a desk scenario but you could also have bit of a mini-gym/yoga studio if needed.

“There’s enough space there to create a nice-sized additional room at the end of that garden, so it could be viewed as a multipurpose space.”

On the other side of the courtyard garden — the left-hand side as you face the house — is a decked seating area. Louis said: “That’s the side that gets the sun, which is great, so we’ve got our garden furniture there and it’s particularly nice in the summer.

“It sits just below a rose tree which is up against the main party wall and that blossoms most from the spring all the way up until now.”