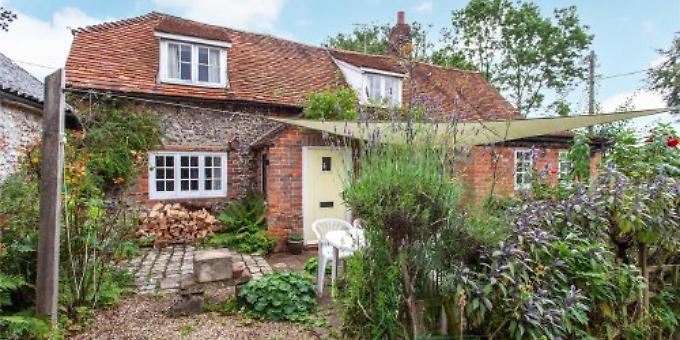 A DETACHED three-bedroom cottage is on the market in Park Corner, Nettlebed, with no onward chain.

Situated in a quiet lane close to open countryside, the property is being marketed by the Henley branch of Ballards, who describe it as offering wonderful potential and a superb opportunity to improve, subject to planning consents.

Vivien says: “Mum lived perfectly happily in it for years but it needs a new kitchen, new bathroom, probably electrics and plumbing, windows, all that sort of thing.

“We’ve had a few people look at it who have sort of said, ‘Oh, it’s lovely, but it’s too much work.’

“And I said to the estate agent, well, you know, in actual fact you could move straight in because we’ve lived in there over the summer while we’ve been sorting everything out.

“Although it’s ancient, everything does actually work, so you could move in and then do stuff at your leisure sort of thing.”

Vivien says the estate agents had also suggested that anyone wanting to do up the cottage while not living in it could put a temporary caravan in the garden, at the front of which is off-road parking for two vehicles.

“There’s room to get a caravan in and then you’d have somewhere to be,” she adds. Outside the front door, the cottage garden is enclosed by high brick and flint walling and panel fencing.

Well stocked with a variety of different plants, it also benefits from a south-facing patio and a greenhouse.

Vivien says: “Mum was a keen gardener so the garden is done, so to speak. Over the summer I’ve had a good go at it and when you start weeding you can see it has obviously been gardened because it’s relatively easy to do. It’s a cottage garden with lots of hollyhocks and all those sorts of things, which is what she loved to have. For her it was ideal because she didn’t want a big garden.”

With parts of the cottage thought to date back 400 years, Vivien says the reasons for the property’s Grade II listing are the feature inglenook fireplace in the living room and the turned-back staircase leading up to the two main bedrooms on the first floor.

Both have fitted cupboards and there is a cloakroom next door with a washbasin and WC. The third bedroom, which can also be used as an office, is accessed via a separate staircase leading up from the kitchen.

Vivien says: “I think that probably the kitchen and the bit upstairs is slightly newer and then Mum had a bathroom and utility room put on in the Nineties.

“She wanted to just extend on to the end of the house, which had been the obvious thing, but for various reasons the planning people wouldn’t have it — although we’ve got pictures of an extension in the past.

“So that’s why we’ve got that extension on the side with an almost flat roof, because they saw that as more fitting.

“I think now probably the planning has got a bit easier again. You just have to put in planning and see what they say.”

As well as tackling the garden, Vivien spent the summer clearing out the cottage — one advantage of which has been to highlight the spaciousness of the living room and dining room.

“We finally got rid of about a ton of furniture,” she says. “There was far too much but I got it down to a good-sized dining table and chairs and sofa and armchair because there’s plenty of room if you don’t over-clutter it.”

Next door to the living room, the centrepiece of the kitchen is an oil-fired Rayburn range cooker that also heats the water for the radiators.

Vivien says: “The room above the kitchen also makes a very good drying area because the house is heated by the Rayburn.

“It heats the place beautifully and there is always that warmth in the background even in summer. We always say to open a window if it’s too hot and if it gets cold just light the wood-burner in the sitting room.”

With Nettlebed and its amenities just over a mile away, one of the chief delights of Priors Wood Cottage is its rural setting.

Vivien says: “The whole area is just wonderful for riding, walking and cycling — there’s lots of bridleways and tracks and all the rest of it.

“The cottage is right on a bridle path and there’s a dressage yard up the lane.”