Arts & Crafts ‘cathedral’ was a true labour of love 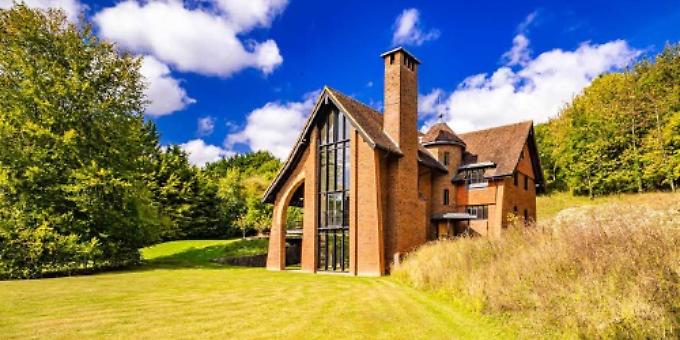 A MODERN four-storey house in the Arts and Crafts style is on the market in Stichens Green, near Streatley.

Checkendon Hill House was designed by Richard Cutler, of Cutler Architects in Wallingford, and has been home to Simon and Alison Walker since 2010.

The couple, who are preparing to relocate to Portugal, previously lived in a bungalow next door that was demolished when work on the house was completed.

With six bedrooms, five bathrooms and six reception rooms, the property was a labour of love for the Walkers that took a number of years to bring to fruition.

Simon says: “We moved here in late 1999. We bought the overall property — the land, as it were — with an old bungalow on it.

“The house was not very attractive, so it just seemed the obvious thing to put up a house that was good enough to justify being in such a lovely location.

“That was really the way round we approached it.

“We made contact with Richard Cutler, who was then in Goring. He’s an award-winning architect who does one-off large houses in the country with an Arts and Crafts theme.

“We spent a couple of years working on the design with Richard and then the planning process and associated admin took quite a time, as it tends to.

“The build again took quite a time because it’s a complex house that was built very much in a kind of bespoke fashion. For example, for all the internal oak — of which there was lots — we had a specialist carpentry firm over from the Czech Republic.

“They did all the floors, skirtings, bespoke doors, library area, furniture and the kitchen.

“This was a slow, careful process, so we took some time over it.”

Simon recalls that at one point, the new house and the old bungalow were very near neighbours.

“Happily they met corner to corner with about a metre’s gap, so we could live in reasonably civilised conditions in the bungalow while the new house was built,” he says.

Simon, who describes himself as an engineer/scientist involved in the design and safety analysis of nuclear power stations and nuclear submarines, says the move to Portugal is the only reason for selling the Stichens Green property.

“We didn’t build it intending to sell it,” says Simon. “That was never the intention. It is just that our plans changed.

“We bought some land in Portugal and we liked it so much over there that we started building a house, being gluttons for punishment.

“And that is just about finished now, so we decided to move and go in the sun more permanently.”

Despite the decision to relocate, Simon is not ready to retire quite yet. He says: “The kind of work I do is consulting and I can do that from wherever, so I will continue till I get fed up with it — doing it from there and coming back to the UK as required.”

Checkendon Hill House is on the market with Knight Frank in Henley and Warmingham in Goring with a guide price of £3,500,000.

With four floors of glazing at the front, the agents describe the house as having a cathedral-like ambience, with rooms that flow seamlessly into one another and out on to the decked terrace and balconied veranda that wraps around the property.

At the same time, they note that the flexibility of the design means the lower ground floor has the potential to be used as self-contained accommodation by relatives, staff or guests, with two large rooms, a full kitchen and bathroom and its own front door.

There is also a suggestion that the space could be used for a business or consulting practice.

Simon says: “What I had in mind with that was that a doctor or someone could easily see patients down there because it has got its own entrance.

“Obviously if you wanted to run a full-blown business you’d be in change-of-use territory but basically the space is very flexible.”

Set in gardens and grounds of 1.8 acres, the property is surrounded by countryside that is largely owned by the Yattendon Estate and the National Trust.

Simon says: “On ancient maps the area on which the house sits is called Checkendon Hill. We were needing a name for the house so it was the obvious one to choose.

“The plot is sloping. It goes up at the back towards the National Trust ground. The Holies is right on the top, which looks down into the Thames Valley and Goring and Streatley.

“So to build the house at all we effectively had to dig a big ledge into the hillside first, which means that what we call the lower ground floor is on the platform that we dug.

“And by the time you get to the back of the house you’re up to the upper ground floor.”

“On the lower ground floor you’re right in the garden,” says Simon.

“Whereas in the view from the main lounge on the upper ground floor you’re up above it and there’s a little Juliet balcony.

“As you can see from the front elevation, the main lounge is very tall internally, so you’ve got that full-height curtain walling which gives quite spectacular views from the ground right up into the sky.

“The lots and lots of glazing — front, back and side — is like a curtain wall, effectively, and it gives magnificent light and views from the house. That was a big part of the design. In the same aluminium arrangement there are six large sets of sliding, folding doors, like bifold doors.

“These are big commercial-grade bifold doors that allow the inside to pass through wide openings — five metres wide, say — out on to the outside decking, some of which is covered as a kind of cloister.

“It is frankly brilliant for entertaining. We had a wedding there for our son back in June and that was glorious.

“Everyone could just spill through and out and back in and out — and it was a seamless transition from inside, so it worked really nicely. It was great fun. We hosted it within the covid rules, I hasten to add, but it was brilliant because we had 30 people for a sit-down meal in the room and tables inside, just within the house, and the big openings from the main lounge and the kitchen-family room were both opened fully out on to the deck.

“The champagne was out on the deck — we had to go out there to get it.

“A third of the people ate outside under the covered cloister and the others were inside, so it was a superb event.”

Outside, the landscaped gardens and grounds are laid mainly to lawn with a variety of trees, shrubs and hedging that create a park-like setting with plenty of diversity throughout the seasons.

For Simon, though, there is nothing to rival the untended parts of the grounds.

He says: “The rear of the house as it goes up the hill getting steeper we leave untouched and it’s the most wonderful wildflower meadow.

“Not in mid-November, plainly, but most of the year. It’s absolutely full of wildflowers and associated butterflies and the like. It is literally stunning.

“That is, I think, one of the nicest parts of the property.”

Another eco-friendly aspect of Checkendon Hill House is the use of open fireplaces and wood-burning stoves.

Simon says: “One of the features we went for was, because there’s lots of wood around there, we have two giant fireplaces burning logs and three stoves burning logs — one in the kitchen-family room and the main one in our bedroom, which has got a big lounge associated with the bedroom suite.

“There’s a sleeping area and a private big lounge with its own log-burning stove.

“There’s a lot of wood gets burned there and a lot of oil consequently saved, which is a good thing these days.”

Simon adds that even taking into account its distinctive design, the house very much functions on a human scale.

“It just really works,” he says. “I mean, Richard Cutler is a brilliant architect.

“Much of the time and certainly now there’s only two of us there and it still feels a very comfortable home just for two people — it’s remarkable how cosy it feels despite its big spaces.”

Having become friends with Cutler during the creation of Checkendon Hill House, the Walkers invited the architect to help them design their new home in the south-western corner of Portugal.

“Richard’s office is just near Waitrose in Wallingford and for many years he kept pictures of our house in his front window.

“He says it’s one of the best things he has designed. Maybe he says that to all his clients but I don’t think so. We know him too well by now.”