Five-bedroom house gets 10 out of 10 for location 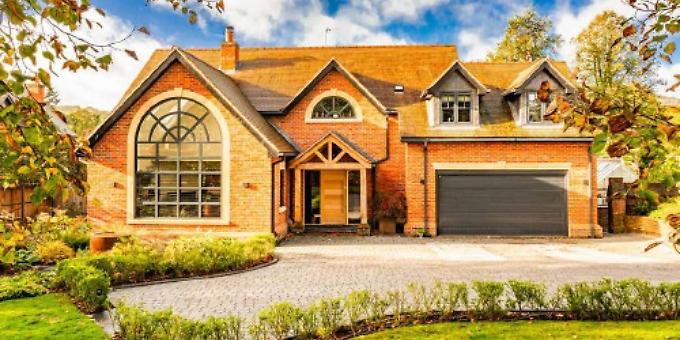 A FIVE-BEDROOM house with four bathrooms and six reception rooms is on the market in Little Croft Road, Goring.

Manor Croft has been home to Meine Oldersma since 2017, when it was first built.

Mr Oldersma, who advises on private equity investments and holds a number of non-executive directorships, said the property was one of three constructed by Reading developers Lukmore Monogram.

He said: “On the plot previously there was a very large old manor house that was not sellable and therefore had to be redeveloped.

“The plot was divided up into three pieces and I bought the corner plot with the old gate, which is still there.

“I bought the house at a time when easy access to London was very important to me. On average I moved every four years for work.”

Mr Oldersma, who has grown-up children from a previous relationship, has met a new partner since moving to Goring.

He said: “We want to look for a house that is for the both of us rather than my house, so that’s the reason we’re moving.”

A desire to downsize is also a factor.

Mr Oldersma said: “I had some furniture and my partner brought some of her furniture and made the house more of a home, but still we felt that the house was quite big and we wanted to start again.”

One indication of the space available at Manor Croft is the integral double garage at the front of the property. Mr Oldersma said: “At the moment it’s used for normal storage, so quite traditional, with nice windows in the door to the back garden. It’s quite large but it’s painted and has window dressing so it looks quite nice.”

Next to the garage is the front entrance porch, which opens on to the galleried reception hall with an oak staircase winding up to the first floor, underneath which is an air-conditioned media cupboard housing home entertainment equipment.

Mr Oldersma said: “It is quite a substantial cabinet. You have all the Sky boxes, the network distribution, the hub and also Apple TV, everything — so from every location in the house you can have access.”

Situated off the reception hall is a vaulted drawing room with a double-height arched window looking out on to the front of the property with its electric-gated driveway and forecourt.

On the other side of the hall is a study with a fitted desk and library furniture by Neville Johnson plus a cloakroom and a door to the garage.

Looking out on to the garden patio, which wraps around three sides of the house, is a sitting room with a limestone fireplace and an integrated log burner.

Next to this is the open-plan kitchen and breakfast room, with separate utility room, which in turn gives on to the dining and family room.

The kitchen has hand-painted oak units that blend with the stone work surfaces. There is also a ceiling lantern.

“It’s very difficult to leave that place, if that makes sense, because it is not only large but so cosy that you have the ability to live in one place, having so many other rooms still available. At times when we have a cleaner coming in there are certain rooms we haven’t even used in the week just gone.”

The abundance of natural light flooding into the property led Mr Oldersma to install awnings for use in sunnier weather. He said: “There is a lot of light coming in and in the summer you want to be sitting as well shaded as possible.”

The dining and family room opens out on to the back garden on two sides, making it ideal for outdoor dining and entertaining in warmer weather.

Mr Oldersma said: “If you look to the kitchen you’ll see that there are bifolding doors on to both sides of the back garden and you have a very nice area where you can sit and dine.

“There is also a nice area where you can just sit with a glass of wine — not at the table but more comfortable.”

As well as the patio, there is also a traditional summer house with a decked veranda and a greenhouse.

Mr Oldersma said: “There are about 1,300 plants and it is landscaped — there are some water features in it, so it’s a nice garden. If you like gardening, this is probably a house for you — and if you don’t like gardening you end up spending a bit on the gardener.

“The house is situated in such a way that we are not overlooked and then on top of that we have the walls around the property, so it is very private.”

With so much space at their disposal, both Mr Oldersma and his partner have been able to work from home in recent times, but the house also benefits from being just three minutes’ walk from Goring and Streatley station.

Mr Oldersma said: “You have the double-height room at the front that is used not only as a sitting area but also as my partner’s office.

“I use the study more because I’m quite often behind a screen with video calls, which is more suited to that room, being shielded from the rest of the house.

“The station is three minutes’ walk and that is so easy. For London I would never ever use the car — I would always use the train because within 50 minutes you’re in Paddington.”

Upstairs are all five bedrooms, three of which are en suite and two of which have dressing rooms.

The two non-suite bedrooms are both doubles and are served by a family bathroom with Hansgrohe and Villeroy & Boch fittings, including a roll-top bath.

With bifold doors on to the balcony, the view from the main bedroom is of Streatley Hill on the other side of the River Thames.

Mr Oldersma said: “Location-wise, this is 10 out of 10 and wherever you go you will take a step backwards. In summer the river is a couple of minutes’ walk, so we spend an awful lot of time walking the dogs and it is lovely to sit next to the river. It is a lovely village, it really is.”