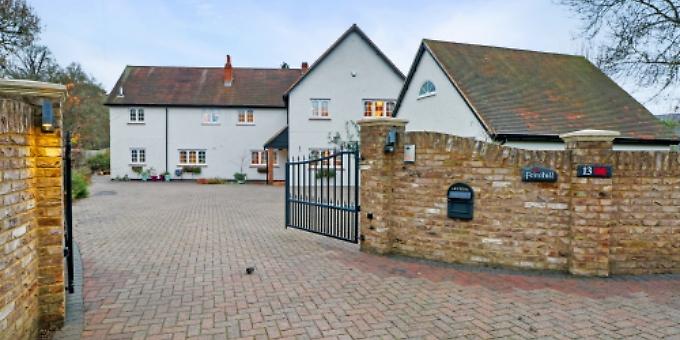 A SIX-BEDROOM house dating from the Twenties is on the market in Kidmore Lane, Sonning Common.

Fernhill has been home to Mark and Lin Kenealy for 19 years.

The couple purchased the property in 2002 through the Beville Estate Agency in the village.

The firm, which was then newly established, celebrates its 20th anniversary next year and Fernhill was one of the first houses to be sold under its banner.

Now Beville, which is based in Peppard Road, is marketing Fernhill once more, with a price guide of £1,750,000.

Marcus Witt, of Beville, says: “This is one of the premier houses in Sonning Common. It offers spacious accommodation, presented in immaculate order, on a plot of more than 1.5 acres combining formal gardens and a paddock with a stable.

“Fernhill is situated in a highly desirable semi-rural lane on the edge of the village overlooking open countryside. It is less than half a mile from the centre of Sonning Common and there is a bus stop within 100 yards. Reading station, with Crossrail services starting in 2022, is within easy driving distance.”

Having both recently retired, the Kenealys are looking to downsize while staying in the village.

Mark, who previously worked in IT, says they might well have put the house on the market much earlier had it not been for the coronavirus pandemic. “I think it probably delayed things,” he says.

“In my last job I was working in America for three years and my wife had literally retired about a year before I came back to run a company in Henley — and then because she had retired and my contract was up in America it was a perfect time to retire.

“What we said was, well, let’s just take a year out instead of deciding if we want to carry on doing some consultancy work or something and see how we feel.

“So we took a year out, which became about 18 months, and travelled the world. That was fantastic — and then covid hit.

“After that, obviously, we couldn’t travel, so that stopped everything. We were always intending to downsize when we retired but because we did so much travelling we put it on hold.

“We’re now at the point where, because we’ve seen houses that we like around the corner, we’ve decided that the time is right.”

Lin adds: “We are interested in one of the houses on T A Fisher’s Paddock Green development off Kennylands Road.

“Although there’s only ever been us two in this house since we moved in, we have large families and lots of friends, so we have had lots of parties and the house certainly lends itself to that because of the size of it.

“Now it’s time for us to downsize and move to something that’s a bit more manageable because, covid permitting, we want to start travelling again.”

During their time at Fernhill, the couple have been able to make a few changes to the property.

Mark says: “Originally we had a small conservatory on one side at the back of the house and the lounge was almost like an L-shape, so there was a gap between the old conservatory and the house.

“What we did was we actually put an orangery along the bottom, which is now the dining room.

“The new dining room is actually an orangery that we put in to replace the old, small conservatory and square the house up, and to be honest we tend to live most of our life there now. It’s a great room.”

The dining room, which opens on to the paved garden terrace, is situated next to the downstairs sitting room and the fitted kitchen, off which is a separate utility room.

The largest room on the ground floor is the drawing room, which is off the main entrance hall along with a study and a cloakroom.

On the first floor are five bedrooms and a family bathroom.

A staircase in the fifth bedroom leads up to a sixth bedroom with a vaulted ceiling and two windows looking out on to the back garden.

The two largest bedrooms are en suite, with the other bedrooms being served by the family bathroom.

Situated at the rear of the property, the principal bedroom also has a dressing area.

Mark says: “When we bought it this house had seven bedrooms and you used to come up the main set of stairs and the seventh bedroom was in front of you. It was a tiny little room and quite dark, so what we did was take it out and create a gallery landing.

“You then walk down the corridor to the family bathroom and next to that is what we call bedrooms five and six.

“Bedroom five could almost be a stand-alone annexe if you wanted because we’ve got a sofa and a television in there, so it’s just like a sitting room, and then you walk upstairs to the bedroom, which is actually in the eaves of the house. It looks really nice.

“Our god-daughter came and stayed with us for a couple of years, so she had that part of the house with the bathroom and the sitting room and the upstairs bedroom as her own little unit that she lived in.

“That’s ideal if you’ve got your mum living with you or teenagers or whatever — to almost separate that little bit of the house off if you wanted.”

Lin adds: “We were going to put an en suite in that fifth bedroom at one point and then we just decided, oh, it’s not worth it, it’s only the two of us.

“But it would be easy to take the water in there because you’re next door to the main bathroom and it would be really easy for somebody to put in a smaller suite to create those two rooms as a stand-alone unit.”

At the front of the property, which is entered via a pair of electric gates, is a detached double garage with space above for either a home office or a gym.

Lin says: “It’s a gym at the moment but it could easily be used as a second office if there were two professional people here.”

Mark says he will be sorry not to have the gym any more but adds that there is plenty of great walking country in the area.

“In lockdown, like a lot of people, I used to do a lot of workouts and I’m still doing a lot of running,” he says.

“I used to go through the fields and run right the way up to Stoke Row through the back lanes and through the woods where there’s loads of deer — it’s absolutely gorgeous countryside.

“There’s a footpath that goes around the back of the farmer’s field there up to Kidmore End and our closest pub is the New Inn there, which we love, and which is a little stroll through the woods for us.

“I mean, we love this area so much and we love the lane we’re on — it’s really quiet and the neighbours are fantastic, so we definitely wanted to stay in the village.

“If everything goes well, we are literally going to move round the corner.”