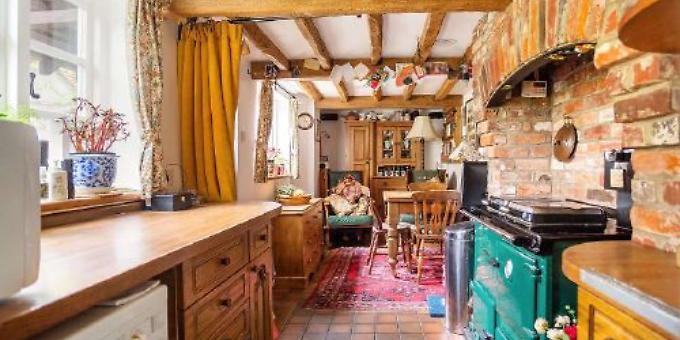 A FOUR-BEDROOM thatched cottage that dates back to the 17th century is on the market in Brightwell-cum-Sotwell near Wallingford.

Orchard Cottage in Old Nursery Lane has been home to Steve and Shena Luck for the past 39 years.

The couple, who are now in their sixties with two grown-up sons, enjoyed a whirlwind romance before marrying in July 1982 and moving to Orchard Cottage in December that year.

Shena says: “We met on holiday. I was living in Somerset and he lived in Essex, so this is our first and only house together.

“He was living in Harlow at the time but we met in Cornwall at a disco at Widemouth Manor, near Bude. We had mutual friends and I went with a group of my friends who were also his friends.”

Shena, who was then 28, was working as a teacher and living in Bridgwater, where she had bought her first house a few years earlier.

She says: “I’d only met Steve on three occasions when he proposed and that was three months apart.

“I wanted to wait until I finished my school year and so we got married in the July at the end of term.

“I sold my house — I had a terraced house in Bridgwater that had doubled in value.

“I had a mortgage at 23, which for a single woman was quite hard and I had to have a lodger. But that made us able to afford here.”

With Steve commuting up to London and Shena continuing to teach, the couple were able to set about restoring and redecorating Orchard Cottage, which is Grade II listed.

Shena says: “Over the holidays we had some friends coming to stay and we set about stripping the paint off the beams.

“All the beams were painted — everything was battleship grey and there were so many layers of paint that it took us a year to do just the lounge because we were both working.

“The flooring that’s in there now is a wood-block parquet floor that came from a household reclamation place at Pampisford, near Cambridge.

“It was an old school floor and Steve did two or three trips with black bags bringing all this stuff back, all covered in bitumen, so we had to clean it all off and lay each block ourselves.”

After living in the property for seven years, the Lucks added a
two-storey rear extension.

“We did the main house, which is what you see from the front,” recalls Shena. “And the L at the back, which goes off the kitchen, we did in 1989.

“The family room is the extension, so if you’re looking from the kitchen that was a window and the only beam we had to cut was the cross-beam, which was rotten and wearing away, so needed to be replaced in any case.

“But we’ve touched nothing else with the extension, nothing of the listed part of the house. In fact, the beams in the extension are probably over 100 years older than the house because they came from a barn in Bridgwater that dated from 1500.

“Then at a place in Bristol we bought a bucket of lime putty, because I lime-washed the outside.

“It’s all lime-washed properly, as it should be, because it’s brick and it makes the brick breathe.”

Having lived in Orchard Cottage for nearly 40 years, Shena has come to rate the construction standards of the 1600s very highly.

She says: “Believe it or not, if you touch the walls the original house is warmer than the extension, which is all done to modern standards with the breeze block and the wadding inside and the bricks outside. But it’s not as efficient as the old method of single brick. It’s soft brick so it breathes, you see? It’s very good and we don’t have any draughts.

“It’s the most gorgeous place in summer because it’s as cool as anything and in the winter it’s cosy. It’s perfect, really.

“We’ve loved it here so much. I mean, it sounds daft — why are we moving? Well, I thought if we didn’t move now we’d never move — we’d be here till the end of our lives, you know?”

While neither of the Lucks have retired just yet, they have set their sights on a move to the West Country — though they haven’t quite decided which bit.

“I don’t think my husband would want to go to the Taunton area but we love South Somerset,” says Shena. “Anywhere, really, even Dorset or Devon, we don’t really mind, but I don’t think we’d want somewhere out in the sticks. When you’re older you have different requirements and I think we want to be near a community.

“I mean, we’re very involved here — I’m the booking clerk for the village hall, my husband is a trustee and he was a parish councillor for eight years.”

Set in roughly a fifth of an acre, Orchard Cottage lives up to its name.

“We’re right in the middle of the garden,” says Shena. “The garden goes all around and we’ve got a little terrace by the pond.

“We’ve got a gin and tonic terrace, we’ve got a terrace outside the kitchen and we’ve got two other terraces by each side of the shed, so we’ve always got somewhere to sit in or out of the sun.

“We are keen gardeners and we’ve enjoyed the garden these last two years. We have a big shed with all the garden furniture and we’ve got an apple press in there, a rotavator, a lawnmower, all those sorts of things.

“It’s a big shed and we’ve got a small greenhouse as well.”

If having an apple press makes it sound as though the Lucks have been making their own apple juice, they have.

However, as Shena explains, the press has a slightly different purpose.

“It’s for storing apples but it’s called a press,” she says. “It’s a wooden store with a door and wooden racks and you put the fruit in there to keep longer and we have apples at Christmas, which is lovely.”

The ground floor of Orchard Cottage features a sitting room and a dining room, both of which are dual aspect. The dining room opens on to the kitchen, off which is the family room.

The kitchen has a range of wall and base units and space for a fridge, freezer, dishwasher and washing machine as well as a built-in hob and oven.

In the family room is a Rayburn range cooker which also provides hot water and central heating.

Also off the kitchen, a rear hallway gives access to the study and a downstairs cloakroom with a shower, WC and washbasin.

Upstairs are four bedrooms and a family bathroom. Three of the bedrooms are doubles and the principal bedroom has a shower en suite.

Shena says: “It’s very handy to have the downstairs shower room and it’s great for guests because the main bathroom has a bath and one of those shower handsets and a lot of people like showers.”

At the front of the property, a gravel driveway provides parking for two to three vehicles and there is also a detached garage with double doors, adjoining which is an office/garden room with stairs leading up to a walk-in loft space that is currently used for storage.

Shena says: “We’ve got two studies, so I think that’s a very good selling point. We also have loads of storage.

“And then under the stairs I’ve got a larder — not walk-in but lots of shelves with all our food and tins and things.

“There’s storage from the porch that you access from the downstairs loo, there’s storage above the study, all that whole roof space where there’s a loft hatch.

“There’s also storage in our bedroom — a big airing cupboard with high-up storage cupboards built in.”

As she and Steve prepare to leave Orchard Cottage, Shena is happy that the work they did to the property early on and since has lasted the course.

“We knew we were going to live here for a long long time, which is why everything has been done properly,” she says. “Not just sort of a quick cover-up as if we were not going to be here long.

“Everything we have done, we’ve not had to touch. Every brick up the chimney has been pointed, everything has been checked, you know? We went back to basics — you have to know that the building is sound.”