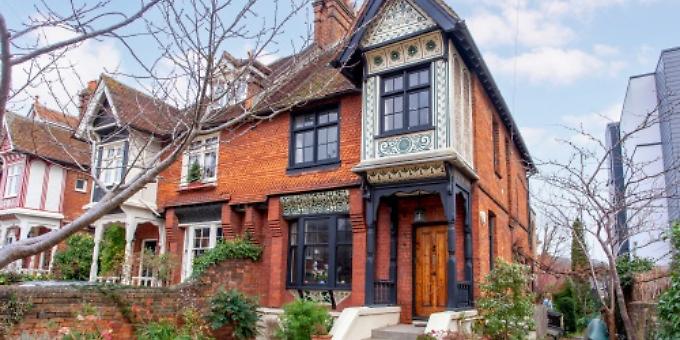 OF all the architectural gems dotted about Henley, the three pairs of so-called “painted ladies” in Queen Street are among the most charming.

The imposing semi-detached houses are decorated with painted plasterwork known as pargeting and because they are so distinctive, they are highly sought-after properties.

Queen Street runs parallel to Thames Side, between Friday Street and Station Road, and number 33 is now on the market.

It was originally built in the 1880s, when Victoria was on the throne and people travelled by horse and carriage.

The house was originally advertised for sale with an annual rental income of £40 per year, a large sum of money in those days.

Since then, every owner has handed down a package of information about the people who have lived there over the years — a portfolio of glimpses of times gone by and faded memories.

The vendor has been living and raising a family there for the last 20 years.

He said: “When we bought the house, we were given a big envelope and it had all the particulars of everybody who has ever owned it. There used to be a nursery downstairs and I think it may once have been purchased from the Imperial Hotel.

“When I moved in it was divided into three, and I think several of them were sub-divided.”

The internal changes were easy to fix and the house has been lovingly restored back into a lovely family home with a room layout that is close to the original. The living accommodation is spread out over four floors, so there are separate living spaces and, unlike with more open-plan houses, it is easy to find a room that is quiet and self-contained.

“What’s nice about this house is that it was purpose-built for four storeys and has not been converted to four storeys,” said the vendor. The basement floor is very light, very dry and high — it’s not a converted cellar, it’s a proper cosy living space.”

The front door opens from the porch into an entrance hall with high ceilings. There is a living room at the front of the house and a sitting room at the back with French doors that open on to the garden.

There is a small boot room on the ground floor that can be used as a study. The kitchen is on the lower ground floor and that opens on to the back garden too. There is also a dining room, a bathroom and a utility room down there.

On the first floor there are three bedrooms and another large bathroom with classic green tiles and a free-standing bath.

There are another two bedrooms on the top floor.

The house has retained many of its original features, which give it character and a feeling of timeless homeliness.

“The fireplaces are lovely,” said the vendor. “The original floorboards and the doors and door handles with all their fittings are almost all still here and there’s a mahogany door, which would have been original.”

The roof was recently redone and a new Worcester-Bosch boiler has been installed.

But while the house is perfectly comfortable and attractive exactly as it is now, there is plenty of scope to make changes if required, or possibly extend it.

You could also potentially open up the ground floor hallway and remove the boot room to make a bigger sitting room at the back of the house, or create a large storage space under the eaves in the big pitched roof.

Because this house is at the far end of the row of “painted ladies” at the Station Road end, it gets a lot of sunlight, which means the rooms are bright and the lawn in the back garden grows well.

“For a town garden it’s a nice size,” said the vendor. “There are acers that really like growing there and a little pond.

“There’s a nice cherry tree at the back, which I planted, and there are two flowering cherries at the front.”

There is a gravel driveway with plenty of space to park a couple of cars at the front of the house and an old brick and flint wall that may have been there since the house was built.

But it’s the distinctive decorative pargeting that really turns heads and sparks the imagination.

The six houses have all been repainted in a variety of colours over the years — sometimes in bright and jazzy colours, sometimes more muted and austere — but they have always reflected the personal tastes and characters of their owners.

At number 33, the window frames, porch posts and roof soffits are black, which is probably how all the houses were painted in Victorian times.

The vendor said: “Something that is distinctive about the house is that it has the black paintwork and all the others now have white. I think they would all have been painted black originally. I know that because when I had it repainted I used to go up and look as I was intrigued to know what the original colours were. I never found a light coat between the black and the wood.”

The house would make an excellent home for a young family. Set back slightly from the road, it is close to several local schools, the river, the swing park and the station.

Its central location puts it within easy reach of all of Henley’s shops, pubs and restaurants, the theatre and the cinema and it is quick and easy to walk into town.